the best version of yourself

On the other hand, popular culture is a dangerous distraction. This week, they almost elected a racist pedophile to the senate in Alabama. Today, the FCC voted to get rid of net neutrality. Trump's still president... And, regardless of which side you're on in any of those things, it is easy to get distracted binge watching the latest Netflix series, watching the latest movie, updating your social media accounts. Our lives are not as streamlined as James' life is in that underground desert bunker, with just one tv show to watch, just a handful (literally, he names them later and you could count them on one hand) of friends online, and his parents. We've got larger families, more friends, jobs, school, obligations, a larger world to worry about. Bigger politics than a trio of people and one fantasy tv series--the politics of which he cannot control (except inasmuch as his interest might influence the way his father writes the show, but he doesn't know that, so it's not the same as the rest of us contacting our representatives or deciding on who or what to vote for).

You probably don't know what most of the things I talk about are. They are my distractions. If you come to this blog regularly or even semi-regularly, maybe you're into movies, so maybe you know some of this stuff. But, hey, it's the Internet, and I use hashtags in my tweets about this blog, so maybe you just happened upon this thing and you have no idea what Brigsby Bear is or what I, Tonya is... I imagine that you have at least an idea of what Star Wars is even if you have never seen any of the films or tv shows or read the books or comics--all distractions.

Distraction suggests a negative, like all that matters is the real world, all the matters is politics and the state of the world and your friends and family and your education, your career, all that real, concrete stuff.

And, obviously it can be. I mean, tv can be. Movies can be. Social media can be. All the fake bullshit can distract you from what's real.

But--and this is coming right back to my point yesterday--all the bullshit matters too. The things you imagine matter. The things that other people imagine and share matter. Stories matter because they are the way we deal with the real stuff. Not just as escape but as metaphor, as parable. Brigsby Bear, for example, is about the way we deal with pop culture, the way we deal with obsessing about things that are not real because it may be easier than dealing with the real stuff. I, Tonya is about how we raise up celebrities and then bury them. To a lesser degree, its third act deals in the way the 24-hour news cycle has exacerbated that celebrity meat grinder. Movies tell us about life. Television tells us about life. Books tell us about life. Social media, whether you like it or not, has become life. Distraction is not something... separate. It doesn't have to be a choice between all that important real life stuff, the politics, the school, the work, or the fake stuff, the television, movies, social media. You can always have both. And, both can be too much, too. Focus too much on the real world stuff when it's not going your way, and it can be just as distracting as any tv show.

Take James in Brigsby Bear as an example. Once he starts making his movie, he is often wearing the bear costume (sans the big head) whether he's on screen or not. Making more Brigsby, being Brigsby, actually allows him to be a more real person than he might have been shutting himself away in his room being depressed about his imprisonment and his inability to lead a normal life. The whole point in Brigsby Bear is that it is because of the movie, because he's extending the fantasy from his imprisonment, that he manages to make friends, manages to relate to the younger sister he never knew, and eventually for his real parents to relate to him as well. When Brigsby resets the universe at the end of James' movie, that moment, we can imagine--the movie we're watching ends shortly thereafter so we can only imagine the aftermath--it is the epiphany that really draws together James and his real family; is whole world was erased when he was rescued, his new life is a second, different chance. His life becomes something more real because he pulls other people into the fantasy. Together they can come back out of it.

Similarly, as long as you don't use whatever distraction to separate from everyone, always, embrace the distraction. But, when the real world comes calling, embrace that too. Embrace the good, whether it is real or not. Make the world a better place, and, you know, leave it from time to time so it doesn't overwhelm you.

I watch movies a lot. I watch tv. I read comics. I read books. I play games. I also teach my classes, get my kids where they need to go and, when they're still willing (the youngest is 15 now, so they've got their own lives most of the time), do stuff with them. I spend time with family and friends. I engage, unfortunately not always as directly as I might like, with politics. All these things--together they can be too much. But, that doesn't have to mean I give up half of them. Each one is a piece of me today. Each friend. Each family member. Each movie. Each tv show. Each student. Each class. Each tweet. Each whatever. The good, the bad, the everything. The key is, real or fake, to make sure the good outweighs the bad and you are able to deal with any of it, all of it, whenever you have to, whenever you can.

And, if you've got monsters to confront, demons to exorcise, confront them on whatever battlefield works. In stories. In life. Wherever. 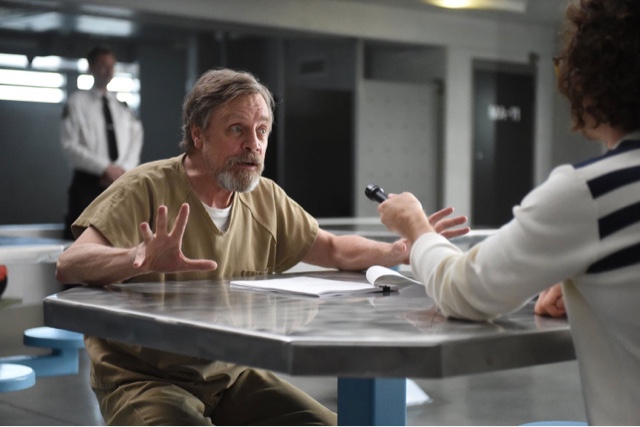