so, how’s my favorite white man?

There is no Jazz in The Jazz Singer, and Neil Diamond is far too old for this. This up-and-coming musician story should 1) be about someone younger or 2) take a notably different angle on the usual story, because certainly, older musicians can break into the business but that experience has got to be significantly different--either because of the years of struggling in obscurity, or the dropping out of their usual job a la Johnny Baxter or Jerry Maguire to try something new. <--that is a different story than La Bamba or The Buddy Holly Story or even Straight Outta Compton. The Jazz Singer at least has its own angle with Jess' (Diamond) relationship with his father (Laurence Olivier), his expectations as a Jewish Cantor; these are different concerns than, say, Ritchie Valens' young love in La Bamba, Johnny Cash's drug problems in Walk the Line, race in Straight Outta Compton.

The opening sequence of various types of people walking the city streets, Diamond's "America" playing over it, suggests a theme that I absolutely do not remember from watching this movie as a kid (and I don't think I have watched it since then), some what it means to be an American thing. And, then a black guy--Bubba (Franklyn Ajaye) comes into the synagogue, willingly takes a yarmulke to wear (though he has a hard time putting it on), and I'm wondering if I just missed it all those years ago.

And, he performs in blackface and we're inside the first ten minutes of the movie. And, I'm thinking about that scene in The Buddy Holly Story in which the Crickets play for the black audience except that was based on a specific real event and this is an awkward (even for 1980) moment that may be a call out to the original The Jazz Singer but could have been avoided for something... better.

For whatever reason he might be arrested in a different version of the story, it does introduce the father/son/religion problems maybe better than the guy coming for him at the synagogue. Pop (Olivier) asks about Yussel Rabinovitch but the police booked him under Jess Robin. He's using another name to be less Jewish, and here doing so while also posing as a black man. When Rachel Dolezal can still make headlines more than two years after her identifying as black got media attention, maybe this story is quite explicitly American. It's the whole melting pot thing writ onto one middle-aged white guy's story.

Bubba goes to LA and calls Jess about a singer recording one of his (Jess') songs, and that night is Pop's party (25 years as the Cantor) and Jess has to tell him he's heading out to LA for two weeks. Pop is not a fan of the idea.

(And, wow, I had forgotten that it was this movie that had the line "Just shut it, alright." Me and my sisters would say that.

And, this was one of the movies we also played the soundtrack a lot. I still know all the songs.)

Some David Bowie/Billy Idol type is recording "Love on the Rocks" as some weirdly fast, punk rock song. Jess performs it as the ballad it's supposed to be and Molly is smitten. I'm not sure she knows it just yet, but this is Hollywood; she's smitten. And, there is an interesting angle here, like Yussel Rabinovitch is married to Rivey back in New York and this guy is someone new, a different identity, so a different woman, different music. But, the film doesn't really explore the identity thing. The name change is just about his rejection of his heritage, and while it clearly pains Pop, the film seems to side with Jess (and it has to, really, since he's the protagonist). Olivier plays his pained, but mostly quiet, reactions to Jess pretty well, though. Rivey, though--her reasoning for staying behind, especially after Jess remains in LA longer, seems arbitrary. With Pop, at least, you can feel his need for tradition, his need for his son to follow in his footsteps.

And then, Rivey shows up in LA right after I type that. I guess she was listening. 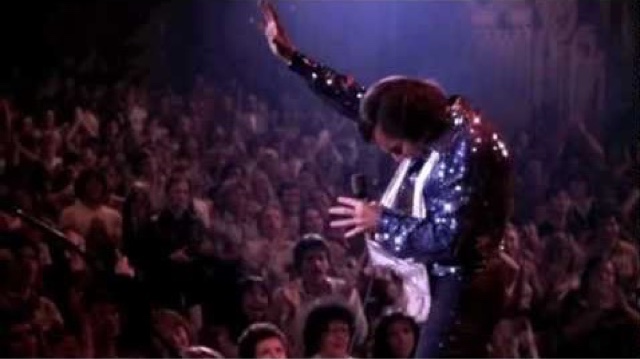 (Separate from the film, Jess was just performing at the Pantages and I remembered my grandmother openly announcing her admiration for Neil Diamond's butt in this movie. More than once.)

Jess has been performing outside of his Assistant Cantor duties for a long time, as he told Pop earlier. But, it feels like Rivey was a footnote, like she not only didn't know Jess was performing but had no idea that he might want to. Yet, she flies to LA on short notice to see him perform, then heads right back to New York because she was just fine with Jess being a Cantor.

Jess and Molly then have a montage relationship, a love scene, and a really awkward recording session of "Hello Again" that ends with an extended bit of kissing, the musicians blurry in the background, the producer interrupting to tell them they got the take.

And, Pop comes to visit. Or, rather, to get Jess to come home. Memorable scene, Pop learns about the pending divorce, and he tears his clothes when he sees that Molly is living with Jess.

And Jess runs. And, I think the film wants us to feel bad for him. If this were a biopic, about an actual musician, this section might be tragic. But, here, it just feels self-indulgent. Dude's feeling sorry for himself, wandering the country alone by choice. And, he doesn't even know that Molly's pregnant; he ran off from LA before she got the chance to tell him. Ran off from a recording session where he was being an ass. Ran off like a petulant child.

Bubba tracks Jess down after the baby is born and Jess returns to LA, to Molly. And, "Hello Again" plays for like the fifth time and the movie almost coulda been called Hello Again, really...

And, I was going to save Roger Ebert's review for tomorrow, but I must end with this:

But then Diamond's whole presence in this movie is offensively narcissistic. His songs, are melodramatic, interchangeable, self-aggrandizing groans and anguished shouts, backed protectively by expensive and cloying instrumentation. His dramatic presence also looks over-protected, as if nobody was willing to risk offending him by asking him to seem involved, caring and engaged.

Diamond plays the whole movie looking at people's third shirt buttons, as if he can't be bothered to meet their eyes and relate with them. It's strange about the Diamond performance: It's not just that he can't act. It's that he sends out creepy vibes. He seems self-absorbed, closed off, grandiose, out of touch with his immediate surroundings. His fans apparently think Neil Diamond songs celebrate worthy human qualities. I think they describe conditions suitable for treatment.