you better lock all your windows and screens

(Note: in the chronological order of this childhood deconstruction, The Private Eyes should have been several movies ago. I borrowed the DVD from my sister, set it aside and forgot to put it in its place. So, I will end my 1980 movies with this one from April of that year. A movie I have seen far too many times. And, not enough.)

It opens with a murder, of course. And, despite the bickering between Lord and Lady Morley (Fred Stuthman and Mary Nell Santacroce), there isn't any immediate hint that this is a comedy.

Then there is the overly long animated sequence with the opening credits that makes it clear this isn't a serious film (but I wish this bit wasn't here, as it has little to do with the actual plot of the film, is too long, and feels more like something out of Scooby Doo).

Then we meet Inspector Winship (Don Knotts) and Dr. Tart (Tim Conway) and the ridiculousness of them, coupled with some actual ability makes them a slight improvement on Theodore Ogelvie and Amos Tucker (their characters from The Apple Dumpling Gang); inept to the point of awfulness with just enough of an inkling of skill that you can sort of understand why they are where they are, doing what they do... if you strain yourself a little. But, you don't really strain because the comedy cuts in and they blow up a gas station with their ineptitude and don't even realize it, and Justin (Bernard Fox) freaks out when anyone says "murder" and Phyllis (Trisha Noble) calls her inheritance "the jackpot" and things get underway.

And, like many a movie I adored as a kid, I might get lost in it today and say very little. 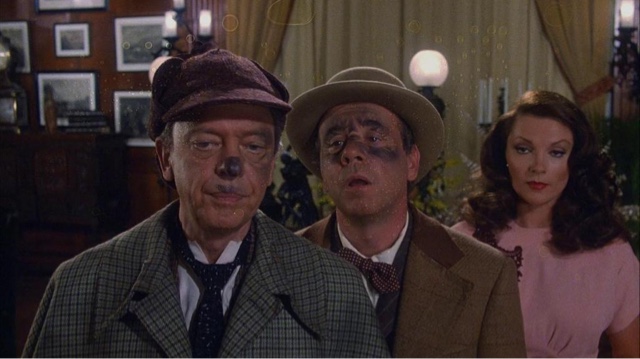 As for making sense, there's Phyllis' line about the jackpot, and also Lord Morley saying just before he is "killed" that "All's well that ends satisfactorily". The poems left behind after each “murder" later end by screwing their own rhymes (but for one). Lord Morley mangles "All's well that ends well" and--SPOILERS--he's the one leaving the poems. Also, interesting detail: the staff "die" in the order they are introduced to Inspector Winship and Dr. Tart, leaving Phyllis alone.