i wanted to make something

I saw All the Money in the World today but I have nothing really to say about it. Performances were fine, but it was a bit too plot-driven to really offer any insight into the characters. Solid but nothing special.

So, the next movie on my "movie life" childhood deconstruction list is For Your Eyes Only. I watched that once before for this blog when Roger Moore died. I will likely get to it tomorrow.

Instead, I am watching Dave Made a Maze. I will save you the jump over to IMDb--though why anyone wouldn't want an excuse to jump over to IMDb, I don't know--and say it is about Dave (Nick Thune), who builds a cardboard box fort in his living room that turns out to be bigger on the inside. His friends go in after him, along with a documentary crew. 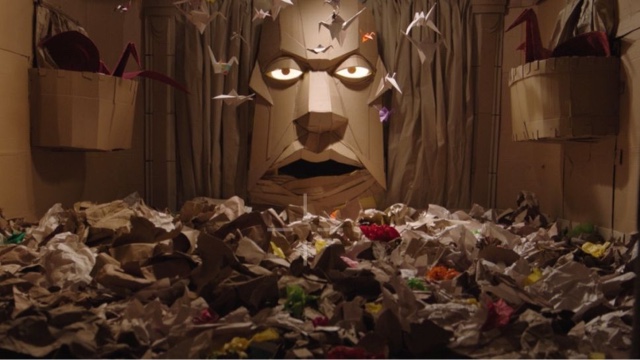 Rick Overton (Ralph from Groundhog Day) plays a hobo that Dave's friend Gordon (Adam Busch) brings in because he says he knows cardboard.

There's a Minotaur, with cardboard head. Rube Goldbergian booby traps (made out of cardboard). A pipe that turns all the people (temporarily) into cardboard puppets. And hanging a towel in a doorway works as a "temporary wall" to keep the Minotaur away. I am not sure if the movie is going to use this all for a deeper message yet but I am definitely enjoying it.

Some people spend their whole lives trying, or striving, to make something, and I did--

I didn't-- I wasn't striving for anything. I just wanted to make something.

I can't sit on my couch and watch tv or think that the Internet is going to inspire me because I'm fucking thirty years old and my parents are still giving me money, and I bore the shit out of them. And, I work jobs that I hate that I have to beg to get...

Do you know what it means to be broke? It means that you are broken, that you don't work.

The movie wants for bigger ideas. Whether it can manage them into the third act... Not sure yet.

Harry later says, "You don't have to fail if you never finish anything."

Puppet Brynn (I won't explain) tells them, "Life is a series of incomplete moments from which there is no escape." Nevermind the Rick Overton connection, I am liking this in a phase one Groundhog Day Project kind of way. They have a "flashback" to repeated mornings between Dave and Annie (Meera Rohit Kumbhani) having the same conversation about coffee and what little he has planned for his day. Their outfits and the surroundings become more and more cardboard as it goes.