Day Break episode three is entitled "What if he lets her go?"

Benesh's (2011) next section is about "the respiration metaphor."

"This is the day that changes everything" instead of that bad day line from episode two. Good recap, though. Oddly, the episode begins by calling this "Day 1." I don't think they did that before, but maybe this episode is going to cover a whole lot of days. Hopper wakes with the bullet wound but it's fresh, just open. He sneaks into the bathroom and bandages it.

Meanwhile, Benesh fits a few details into the respiration metaphor: Phil as a "blowhard," Phil blowing smoke at the Tip Top, Phil blowing a bubble while learning piano, and Phil performing mouth-to-mouth on O'Reilly (p. 101-2). She also includes Phil performing the Heimlich, because that "restores breath to Buster."

Hopper's package he had to get has a small hourglass in it. He thinks it's a joke.

Benesh makes the same link I have before (I think... or maybe I'm just remembering the pink tab here labeled "O'Reilly-->Buster")--Phil not saving O'Reilly to Phil saving Buster. Benesh writes:

The digestive metaphor and the respiration metaphor are linked through Phil Connor's saving Buster from choking on his food. The failed attempt to save the old man, first by feeding him and then by performing mouth-to-mouth resuscitation on him could be seen as a rough draft, foreshadowing Phil Connors' later successful revision as applied to Buster. (p. 104)

More subtly, the reproductive and breathing metaphors are linked through the girl piano student in pink who Phil Connors emulates as seen through the pink bursting gum bubble, a feminine, child symbol that resembles a lung and deflates as the ego of the learner must. (p. 104)

There are so many stretches there, that I am tempted to make a pun about working out.

"If I can get her earlier tomorrow..." Hopper sure likes to think out loud and confuse the people around him, this time his partner Andrea.

Back to stretches. To suggest that somehow a reference to a female--if the bubble can even be said to be that--means some reproductive symbology is... reductionist, sexist, simplistic, and unwarranted. Assume we buy the pink to pink connection here, what does it matter then that the bubble is a "child" symbol? Layering the symbols on each other makes them seem less meaningful to me. I see Phil's bubble as a figure of playfulness, a sign that even as he has gotten more serious he hasn't completely changed. Bubble gum is generally pink, just like snow is generally white and the sky is generally blue--these colors don't have to mean anything.

You know what respiration bit Benesh apparently misses? Phil's weather report, opening scene of the film, he mimes blowing the front on the big screen behind him. Let's assume Benesh is onto something, what's the progression? If there's no progression, I say this stuff is just coincidence. The progression is not linear, exactly, though. Phil blows the clouds--fake. Phil smokes at the Tip Top--real. Phil has a cigar/cigarette, whatever the man with no name has, in his mouth on his date with Laraine but doesn't seem to be smoking. Phil blows that bubble during his piano lesson, Phil fails at mouth-to-mouth with O'Reilly, Phil saves Buster from choking. It almost becomes more real, and more affective, as it goes.

It's "Day 2" in this episode of Day Break. Hopper has figured out how to start his morning better, switches cell phone batteries with Rita, picks up his package, saves that woman from getting hit by the bus, then sneaks around to the back of the car of the guys staking him out... fight scenes inside the confines of a car must be hard to choreograph and shoot.

Each metaphor evolves from gratifying self at the expense of others (hitting on Rita in a hostile and disrespectful manner, and then deceiving and sleeping with Nancy; rejecting the company of and mocking Larry; and showing off by blowing clouds [yay, she did catch this one], in a physical demonstration of his later assertion, "I make the weather" [nice catch]) to crude, doomed, experiments that are either the right things for the wrong reason or misguided acts done for the right reasons (making a snowman with, but failing in seducing Rita, experimenting unimaginatively with the circumstances by indulging in gluttony [I reject the suggestion Phil is being unimaginative... just look at the dessert on the right in this shot: 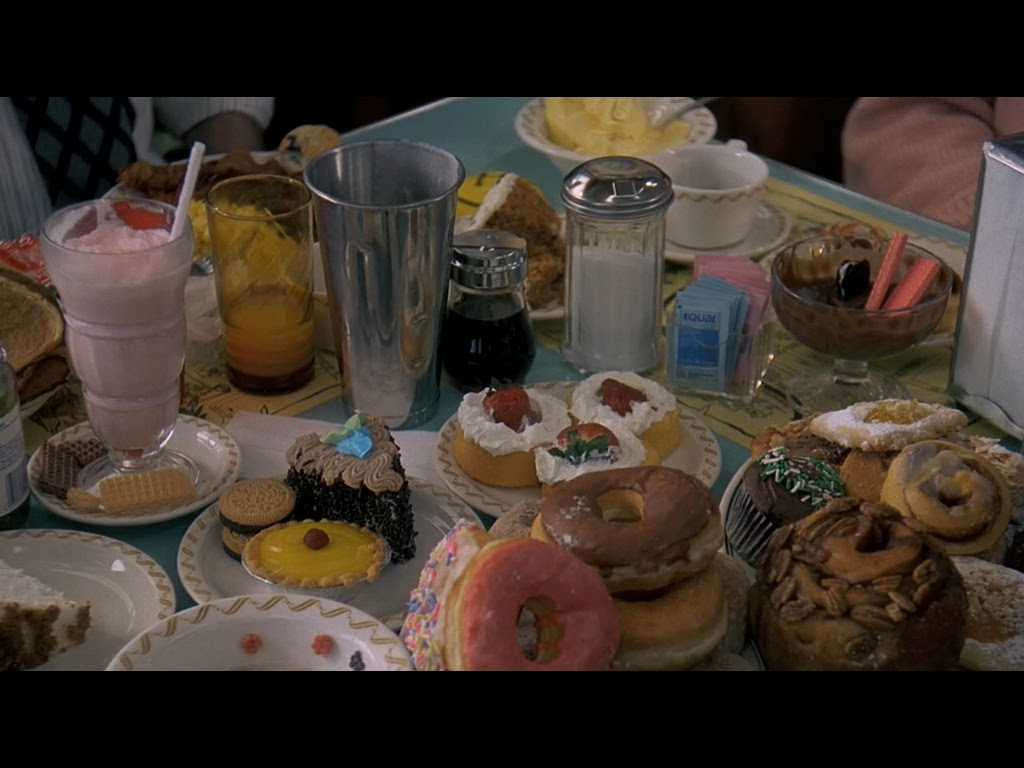 Chocolate pudding, an Oreo and pink wafer cookies? That is some time loop imagination in action right there.], and neither successfully saving the old man nor truly accepting his death [until, you know, he apparently does]) to honoring others by the end (reproducing Rita in a sculpture [which Benesh misidentifies as ice on page 104], feeding the hungry old man, and saving Buster from choking). In each metaphor the relationship begins with complacency, indifference, or mild antagonism, escalates to active aggression, and ends in integration. (p. 104-5)

By the way, as I was typing all that, Day Break ended with another cliffhanger, this one kinda odd since it is night time and the day is nearly over--Andrea calls Hopper because, apparently, she just killed what looks like a cop or a security guard.

But, let's talk about that "active aggression" line from Benesh. Nothing she lists in this paragraph amounts to "active aggression" so we must backtrack slightly. The reproductive metaphor, for Benesh, if anything starts with antagonism and aggression--Phil mocking Rita in the van, Phil's line about his pelvic tilt--and then finds it's midpoint at... somethings else. What is the "date night" sequence here? Or his liaison with Nancy Taylor? This is not an aggressive middle, nor is his time spent with Rita on "god day." The digestive metaphor also begins with antagonism, sure, Phil mocking Larry eating, but is Phil's gluttony the "active aggression" here? Is smoking the "active aggression" in the respiration metaphor? Is blowing that bubble gum bubble? Benesh chooses terminology that neither exactly follows her own examples nor really proves her own point, which is especially problematic because I do think she is making good points.

It is easier (though maybe not adequate) to suggest a more simple transition with Phil's relationships (or "relationships" given the metaphors). For example, as I've got written in the margin on page 104, "Phil's first introduction with Larry is to reject. His last to embrace [figuratively]. His first with Rita to reject. His last to embrace then carry." Phil's relationships with Larry, with Rita, with O'Reilly (sort of), with Mrs. Lancaster (mocking her with the cappuccino and espresso line), even with Nancy Taylor--these all begin as either impersonal or deliberately antagonistic and they transition into something more personal, even friendly. His hugging Ned the exception that proves the point, I suppose. The interesting thing is, Phil's relationship with himself follows this same progression. He is sarcastic and insulting, deflecting his own self-hatred, then he learns to... well, maybe he doesn't like himself, but he certainly learns to live with himself.

Today's reason to repeat a day forever: to do better than just live with myself.