The second episode of Day Break is called "What If They Run?" The cliffhanger ending, remember, Hopper and Rita were heading out of town, but trucks were waiting. Phil Connors never had to deal with this. Even when he managed to get out of town in the original screenplay--a narrative mistake, I think--there were not men waiting to kill him.

(There's a handy intro setting up the repeating day before the second episode, though the opening line is a bit cheesy--"You think you're having a bad day?")

Benesh (2011) talks about eating--the digestive metaphor--and makes some good points. I've written before about food (even mentioned Benesh, though at the time I was still avoiding reading her). And, I know these two things don't connect in any obvious way, but it occurs to me Hopper ate nothing in the first episode, just as Phil barely eats anything in Groundhog Day. And, I argued before, of course, that Phil doesn't have to eat, at all. Doesn't have to sleep. Doesn't have to do a lot of things.

Hopper gets shot in the gunfight on the mountain road. If I recall, that's going to affect him on the next resumption. Like that time loop episode of Lois & Clark with Mr. Mxyzptlk. Clark could alter how people were on the next go round. SPOILERS, not that any of you will go out and watch Day Break because I'm writing about it, though it is worth the time (at least I thought so five or so years ago when it was cancelled after 6 episodes and I had to get onto ABC's website to watch the other 7 a few months later... Anyway, the SPOILER--if I remember rightly--some changes Hopper makes to one resumption are going to affect the next.

Cop spots blood on Rita's clothes, she's got a good cover story about being an ER nurse and finding an injured dog on the highway, but Hopper panics, pulls a gun on him.

Speaking of eating, though, I'm reminded of Siddhartha. Siddhartha explains to Kamaswami:

These are the things he has learned that he can give. Asked to explain the use of these things, Siddhartha explains:

[Fasting] is of great value, sir. If a man has nothing to eat, fasting is the most intelligent thing he can do. If, for instance, Siddhartha had not learned how to fast, he would have had to seek some kind of work today, either with you, or elsewhere, for hunger would have driven him. But as it is, Siddhartha can wait calmly. He is not impatient, he is not in need, he can ward off hunger for a long time and laugh at it. Therefore, fasting is useful, sir. (Hesse, 1951, p. 52)

Meanwhile, as I type this, Rita's getting the bullet out of Hopper and he tells her about the resumptions. Only Day 3 and he's pretty definitive, I'd say. Maybe he watched Groundhog Day a lot when he was younger. He says he's living this day over and over again. Technically, that is just two overs, but the phrase implies more. Anyway, Hopper calls the Dodgers score and mentions the newspaper headlines about Garza and a truck accident (that Sig Alert). Rita is not buying it. He needs a better "god day" scene to convince her.

Back to food, though, you'd think Rita would have picked up some food to help Hopper keep up his strength after she patches up his wound--she was exiting a liquor store when that cop saw her earlier, she bought, I guess, a sewing kit and some super glue (and Hopper snagged a toolbox so she could get the bullet out).

Hopper won't tell her she was killed, but she's figuring it anyway because of what he isn't saying. I'm wondering how long these two have been together, how well they know each other, not just because of--SPOILERS--her possible involvement in the frame-up, but because he is not the sharing type normally--Rita even says as much. Rita hears the Dodgers score on TV and shares a story about how she actually tried to save an injured dog on the road once.

Andrea (Hopper's partner if you're not keeping up) shows up with IA in tow; this time she lets Hopper know she's working with them right away, secretly. Two of the bad guys show up, don't realize cops are watching. Gunfight follows, of course.

Benesh (2011) points out that many scenes in Groundhog Day "are set in a diner or restaurant. Food is related to survival, nourishment, pleasure, and communal ritual" (p. 98).

And, Andrea gets shot covering for Hopper and Rita.

Food in Groundhog Day doesn't really serve toward survival. Even when Phil tries to use food to keep O'Reilly alive, he fails. The nourishment is meaningless. And, the only other significant eating we see is Phil gorging on junk.

Hopper manages to drive through the night, but with a lot of flashy editing, as 6:17 comes, it's back to the previous morning. Rita wakes up to Brett bleeding out--his gunshot wound is fresh (no bullet, though, I assume). He wakes up in the hospital. They should get him some food.

Hopper thinks the sedative Ehrmentraut gave him triggered the resumption--he's confused because he wasn't caught last night but still looped back around. He should stop thinking he knows what's going on.

In the hallway, Hopper's sister just happens to mention that their father was a cop--sounds like a Chekhov's Gun (or Chekhov's Cop Father) kind of line, gonna come into play later.

Benesh, of course, likes to reference Phil wanting to eat the groundhog--I've complained about that one before. She has three screencaps related to eating, Phil mocking how Larry eats, Phil shoving the piece of cake into his mouth, and Phil with O'Reilly at the counter at the Tip Top.

Hopper and Rita on a stakeout without any snacks. Seems wrong. Turns out their "first date" was on a stakeout, though Rita doesn't know it. The package Hopper tries to get from his mailbox--I've skipped some details; I can't SPOIL everything--isn't there, he figures cops took his mail, tells Rita he'll just get there earlier tomorrow. She is appropriately confused. She might be lightheaded from not having eaten all day.

The episode ends on less of a cliffhanger than the first one. And now Phil is doing his weather report as I eat a late dinner. Had a couple handfuls of popcorn--not a lot of nourishment there--earlier but no real meal.

But, I'm not done with Benesh for today, just yet. She's got one more bit of silliness before the brief "digestive metaphor" section is complete. And, I write this as Phil talks about blood sausage. Rita claims to like it, but I think she's lying. She's certainly not going to eat any blood sausage or anything else during the movie--we will just barely miss her eating some pie on Day 3, and she will play with her food on "date night" but no actual consumption. Anway, Benesh tells us,

Taking in is only one aspect of digestion, and in an earlier image depicted in Figure 16 [similar to the screencap below], we see a sly reference allusion to elimination is slyly alluded [sic], as Phil Connors walks by a waste receptacle featuring a cartoon Punxsutawney Phil (notice the "copies" sign to the left, an allusion to reproduction and the two Phils). (Benesh, 2011, p. 99)

Actually, before I share the screencap, I would like to say that I hope Benesh's dissertation went through at least one more edit before it was finalized and published past the version I've got because the image she means to reference here is actually her Figure 14 (16 is the ice sculptures of the groundhog). This is (approximately) what is in her "Figure 14: Waste Receptacle": 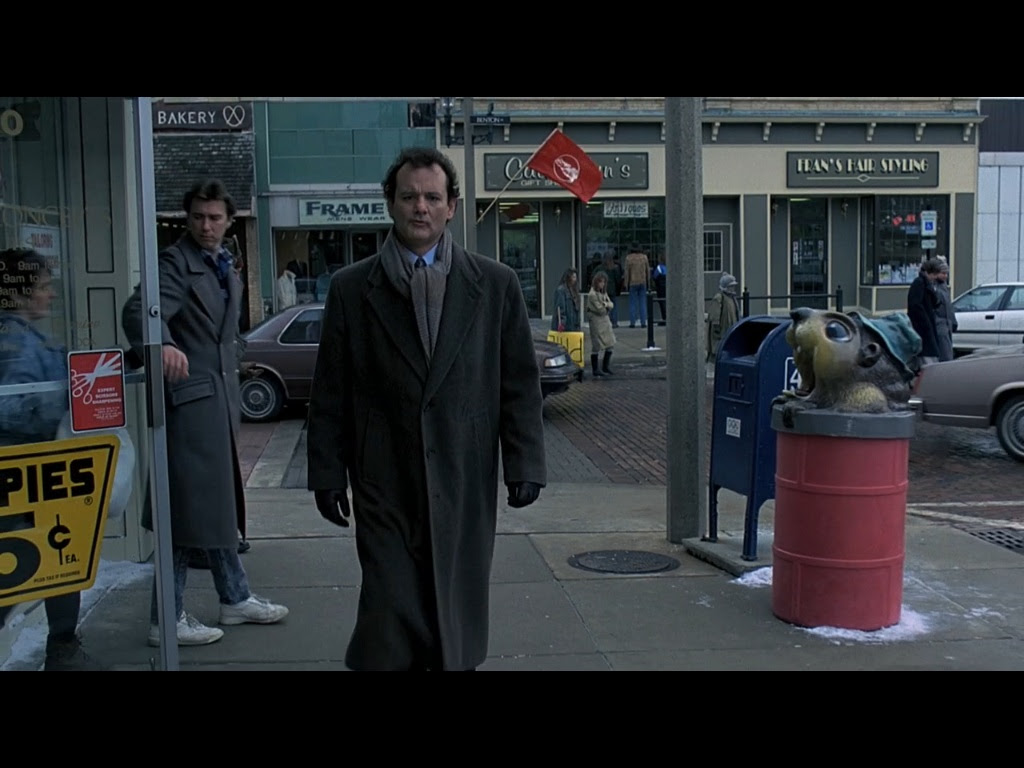 That's Day 2, but you can actually see the Copies sign better on Day 1 (though that wouldn't link the copies to the trash can as Benesh is trying to link them): 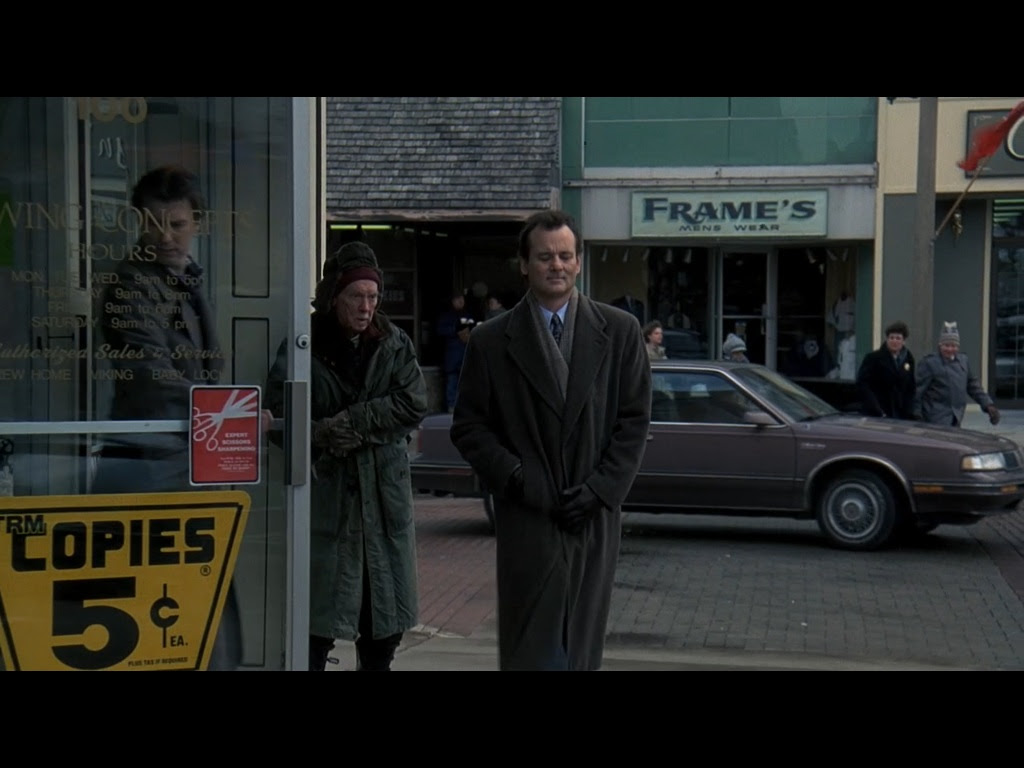 ...no, not yet. First, why I called this silliness. It's a Copies sign. If this were Ramis' later film Multiplicity I could see assuming it was placed there on purpose. But, this is Groundhog Day, which, yeah, there are two Phils, but it is a stretch to a) suggest this Copies sign means something or b) reference it from the photo of the "waste receptacle" just to make the connection between reproduction and elimination.

In this the digestion metaphor, the two entities do not necessarily become identical, but rather each is mutually influenced and expanded by the other. For example, consider a cow that eats grass, transforming both cow and grass, and the humans who drink the cow's milk. Or, in a very different example, imagine an observer of a symbol who is changed by the observation, and whose relationship with the symbol also changes the symbol by imbuing it with meaning--by, for example, painting it, writing about it [which both Benesh and I are doing, yay us], or speaking about it. Thus expanding the observer expands the symbol's influence by adding a new personal interpretation to the currently existing collective cultural one. In this way the digestive metaphor is as expansive as the reproductive metaphor. (p. 99)

Maybe Benesh wasn't eating while she was writing this section, and she saw that groundhog and thought it looked delicious. Me, a) I'm a vegetarian and b) Punxsutawney Phil looks a bit too furry to be immediately appealing to me.

Today's reason to repeat a day forever: to eat, every day a different thing, to try every food there is to try and maybe invent some new ones.