Imagine a sequel, Groundhog Day 2: The Quickening perhaps, or Groundhog Day 2: Electric Boogaloo. The latter is funnier, but the former makes more sense for the point I'm about to make. Imagine Phil Connors, back living day-to-day, but occasionally, he bounces into another day, so while he's living a normal life, he often has inside information on what's coming. It's interesting, but it's already not an appropriate successor to Groundhog Day. But, there's more. There's no Juan Sanchez Villa-Lobos Ramirez coming back from the dead, no planet Zeist, but there is apparently an Adjustment Bureau-style behind-the-scenes illuminati that are driving all the time bouncing, which negates everything we know from the previous stories...

Oh, I'm not talking about Groundhog Day, but imagine it. Some secret organization, of which it turns out Rita Hanson is a member, were manipulating the time loop all along, training Phil to be able to loop on his own whenever he wants...

This is basically the premise of Richard Lupoff's "12:03 P.M." The original story, "12:01 P.M.", a few cheesy 1973 details aside, was a well-crafted, bleak little nightmare. The far more recent (2011) sequel, "12:02 P.M.", extended the original just a little bit, losing some of the bleak charm of Myron Castleman's story for an odd, and slightly unexplained twist and abrupt ending. Finally, Lupoff's (2012) trilogy capper (although, given the ending, there could be more in store for Castleman, but I hope not), "12:03 P.M.", throws the repeating day premise out almost entirely. Instead, the "bounce" has become something else entirely. In fact, if Castleman's understanding of what happened to him after the second story is correct--

"You tried to stop me but I got away," he tells his lawyer friend, "and jumped off your terrace. I went straight down, like a diver going off a diving board, and I twisted--I twisted--on my way down to the street. Not just my body, I twisted my mind and when I hit the pavement instead of bouncing straight back through time I bounced through..." He trails off and his friend suggests he see a "head-shrinker."

--then none of Rosenbluth's "time bounce" theory matters, and the ending of the original, retroactively, loses much of its power. And, Castleman's trip to the library to read Rosenbluth's journal article in the second story becomes rather pointless.

There are some details in the third story I like--it's not all bad. The new version of the bounce, just like it shifted Castleman to Kastleman in the second story, has put Castleman into a slightly altered universe, in which Spiro T. Agnew is President (keep in mind, it's 1973), Nixon his Vice President, and Quebec has just become an independent nation. Neither of these details matter to the plot, but they make for a slightly off-kilter feel that plays like less cheesy science fiction than some of the time bounce stuff in the previous stories.

Ultimately, I still like the original story, and I love the 1990 short film adaptation starring Kurtwood Smith. But, Dolores knowing what's been going on with Castleman since the beginning makes her seem a bit cruel, letting him go through all those resumptions (that word is, again, absent) with no light at the end of the tunnel. And, in the end, when Castleman--it seems a little late for a SPOILER warning--saves Agnew and the Québécois President René Lévesque from assassination, Dolores calls him "a hero... An authentic hero" I couldn't help but disagree wholeheartedly. He got shot in the head, sure, but then he bounced right back into the "present"; it is not heroic for a guy who is arguably immortal to get in the way of a gun, or at least only slightly heroic at best.

Phil Connors, on the other hand, is heroic, ultimately. He saves Buster from choking, saves Zacchaeus from breaking his leg--and he has no expectation of recompense. The film doesn't even suggest that he is doing these good deeds because he believes he should to escape the time loop. Phil exists in a new state by the end of the film; he doesn't need to escape the time loop. The time loop has become his life, his baseline. The cynic--in me or in you--might think Phil does good because he's run out of bad or figures it's the only way out of whatever god's test he is subject to, but Groundhog Day does not tell us this. And, since my approach in this blog is hermeneutic whenever possible, I must go by the text as presented.

A thought occurs to me--Phil's choice of ice sculpting proves that he has a) accepted his place in the time loop and b) is no longer trying to manipulate events toward escape or winning over Rita. Think about this: assume for the moment that the last day of the time loop that we see has all been planned; Phil knows just when Rita will enter the dance so he has only learned to play those two songs; Phil took up ice sculpting just so that he could impress Rita with a portrait; and Phil has only done all those good deeds because he knows that the mystery of all these people loving him and thanking him will intrigue Rita's producer side and get her into his bed. It works. It isn't in the text, but it also doesn't contradict the text... except for this: why ice sculpting? 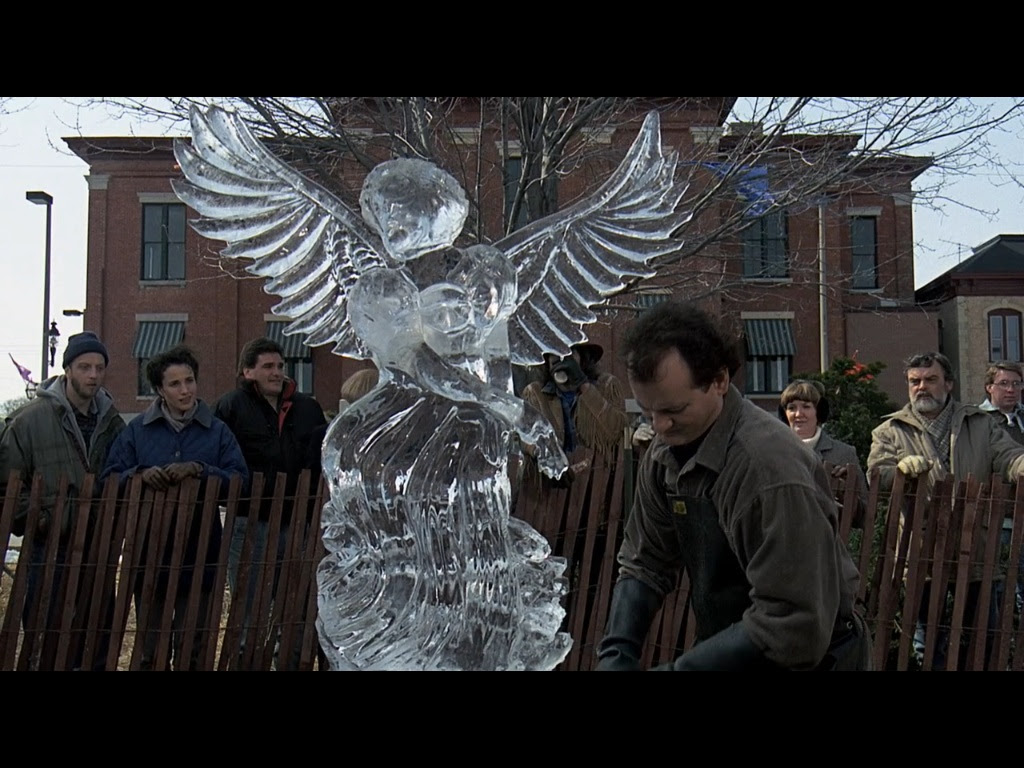 He could just as easily take up painting or, as in Rubin's original, sculpting marble. But, he chooses an artform that, by its very nature, does not last. I've compared it to sand mandalas before, but it is worth mentioning again. Phil's chosen artform is not predicated on lasting into the future. It is predicated only on the present. It's more meditative and thoughtful, however much Rubin tries to justify the choice of marble--Phil tells Rita, "The wonderful thing about marble. You can take a lifetime of love and beauty, warmth and softness, and preserve it in a single moment of stone" (Rubin, 2012, p. 65). That turn of phrase is nice, single moment of stone, but it makes more sense and is far more poetic for it to be ice. And, Phil's choice of ice shows that he is no longer thinking about the future. There is only the present for him. The present may be 24 hours or so in length, but it is still just the present.

Phil doesn't just save lives each day; he improves lives. In big ways--getting Debbie Kleiser over her cold feet--and small ways--the old ladies could have certainly called the motor club if Phil had not been there. He entertains at the party not to show off but because he can. Mary might be a good piano player, but I have a feeling that Phil's situation makes him quite good at Jazz-style improvisation, because for him music is always now, always old, always new. Phil is the authentic hero. Myron Castleman is not.

Today's reason to repeat a day forever: to be an authentic hero, obviously.