it just depends on how you look at it

Tonight, another milestone was reached in the Groundhog Day Project--I killed one of my copies of the movie. My blu-ray copy has been "laser burned." It will no longer play.

A moment of silence, please.

That is enough of that... except, with the DVD copy I can no longer see all the fissures in Phil's face. I can be alliterative, though, it seems.

No biggie. I have certainly run that disk a lot of times. Now, to kill the DVD. Of course, starting next week, I'll be watching the copy on my iPad a lot while I am out of town. But, anyway, today is not a day to lament the loss of a blu-ray disk. Today is a day to come at Benesh's (2011) Becoming Punxsutawney Phil: Symbols and Metaphors of Transformation in Groundhog Day hard. I've got a deadline.

I was just looking at the screen and... I miss my blu-ray. Whatever definition this is, it is a sad sad simulacrum of a much more enjoyable (read: clear and crisp) version of this film. Speaking of versions of Groundhog Day, recall this quotation from Benesh (2011):

Thus, for viewers, no less than for Phil, an imprint remains as during the film the audience members “introject” or take in its psychic content including symbols, images, and narrative, as well as projecting individual personal concerns. After the film, if it is particularly “resonant,” the process continues as the film “plays on” in the viewer’s mind. A personal “edition” of the film is thus created and is assimilated into the psyche of the viewer. (p. 8)

An aside before I get on with Benesh: is it wrong that a) my 11-year old daughter thinks Phil should answer Rita's "I don't know, Phil, what are you dying of?" with "Prostate Cancer" or b) that I think that is hilarious?

...the reproduction in the film centers on procreation and co-creation as seen through imitation and making representations of desired objects (snowman, ice sculpture), as well as providing a backdrop of double sand multiples. The larger message seems to be that each new day or moment brings multiple opportunities for creation, which one can choose to ignore, distort, or capitalize upon. (Benesh, 2011, p. 110)

Page 113 and 114 contain 28 of Benesh's 47 screencaps. My rude side thinks it's cute that she's got so many screencaps; it's adorable. The images subfolder in my Groundhog Day Project folder on my computer (and backed up in Dropbox) currently has 525 files, well over 400 of which are probably screencaps.

Page 115 has two pink tabs, one labeled "females" and one labeled "Anima." I've written in response to this page previously. I will note an X on this page, where Benesh refers to Buster as "Mayor."

Page 118, which has a pink tab labeled "baby steps" and a purple tab labeled "Larry=Phil," already came up in an entry about shadow males.

Benesh (2011) has a subsection entitled "incrementalism" that has a couple highlights, and a yellow tab. "The theory of incrementalism (Dweck, 2000) proved relevant," Benesh writes

as Phil Connors is, throughout the film, concerned with getting ahead, achieving his goals, and looking good. In contrast to "entity theory," [this next part is highlighted] incrementalism is an orientation toward effort versus extrinsic reward... Phil Connors becomes more incremented in his outlook, that is, he values each effort and action on its own merit, intrinsically, and not for what it will gain him in external rewards. (p. 119)

My corresponding secret, shadow research questions that helped my study were these: Was everyone merely projecting onto this film? Were head scholars enjoying a rare belly laugh and the froth of a happy ending (unearned in some other opinions) feeling forced to justify their enjoyment by magnifying its (perhaps faux) profundity? (p. 121)

The next line is interesting, considering Benesh must have spent so much time writing about Groundhog Day; she continues:

Because, as I mentioned before, I merely found [the film] funny and well-done, and that was more than good enough for me. What had I been missing and how could I have missed it? And how could the various interpretations appear so both definitive and distinctive? (p. 121)

As a concluding sort of thought regarding Phil Connors overall transformation, Benesh writes:

...as Phil Connors takes in by inquiring of other characters and expresses in outward action the results of his knowledge. He does so, at first in a manipulative manner, and later in a conscious spirit of reflective learning and the building of his characters and empathy. (p. 122)

The last sheet before the References section has a few things worth noting. First, Benesh says,

A pivotal moment in the film arrives when Rita tells Phil Connors that his dilemma may not be a curse: "it all depends on how you look at it." Much earlier, Gus said essentially the same thing, about Phil being a glass-is-half-empty kind of guy. (p. 123)

And I respond in the margin with a simplification: "Rita mirrors Gus."

The second thing is Benesh calling Phil "the man who loved heat and longed for high altitude." This is presumptuous on both counts, and I've said as much before. Phil never even implies that his reason for not going to Punxsutawney is because of the cold, and his "high altitude" line is clearly an affectation he has put on to attract Rita's attention.

Finally, there is a yellow tab on Benesh's last page labeled "kaleidoscope." And, I will share her concluding paragraph:

Continuing the visual analogy, consider a kaleidoscope. In a world of blue and white, with accents of orange [not sure where Benesh sees orange in the film], red, and pink, full of lines and spheres, and hands uniting and dividing, and groundhogs living and otherwise, every jostle of perspective, every shift of mood changes the visible pattern, but no the basic material. That material remains, always with some aspects of the mosaic [to mix metaphors] hidden and others more apparent. Does one choose to fixate on what is missing or appreciate what shows? [Is she critiquing herself or Phil here, or neither?] What can be learned from the various patterns? How can we orchestrate the elements in such a way that a constructive path emerges, even if it is a rocky road? These are challenging questions, raised by many developmental theories and religious thoughts, and answered differently, but one certainty remains: "It all depends," as Rita muses, "on how you look at it?" (p. 124) 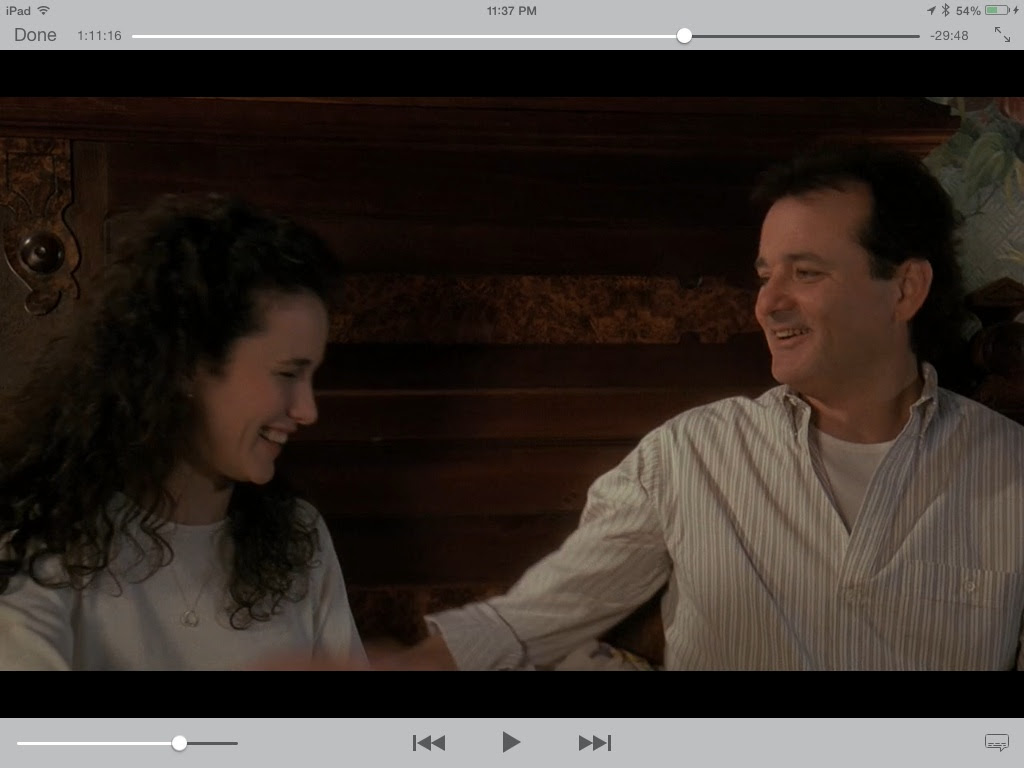 Today's reason to repeat a day forever: to find a new way to look at things each and every day.