he sees his shadow

Obvious time loop markers right away: the alarm clock at 6:17, the bird in the window, tripping over the gun, looking outside to not only see the garbage truck but two joggers running by it.

Oh, I'm watching the first episode of Day Break. It's like Groundhog Day: The Series, if Phil Connors were played by Taye Diggs and was a cop, and Rita was played by Moon Bloodgood. 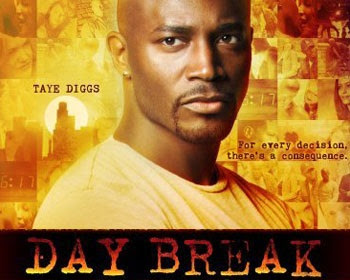 Cuts himself shaving--hard to repeat, but I think I remember that's going to repeat at least once. Breaks a soapdish; that'll repeat. Newspaper headline about a dead District Attorney (with rather obvious closeups on a few phrases and a name, Garza). Getting coffee, a woman bumps into him, then comes the biggest marker: a bus smashing into a parked car.

Ransacked apartment when he goes home--he believes his dog did it, because rowdy dogs usually open drawers. Nine phone messages waiting, including 6 hangups from his sister. And, he's arrested for killing Garza--hey, I recognize that name from the closeup earlier.

Another marker: as Hopper is being fingerprinted, a noticeable arrestee (looking a little homeless or at least drug-addled--let's call him O'Reilly) nearby fighting off the police, nothing to do with the plot at hand obviously, but Hopper and his (presumed) partner turn to look, draw our attention to it.

A lot of exposition in the form of an elevator confrontation with his ex-partner Chad (Rita's ex-husband). Current partner, Andrea, may be dirty. Hopper may have been having an affair with Rita while he and Chad were still partners and Chad and Rita were still married--Hopper protests, but I'm not buying it. The hot characters--you know, Taye Diggs and Moon Bloodgood, had to have hooked up as soon as possible.

Marker: Dodgers beat the Giants on the radio. The day ends with an abduction from jail. Ehrmantraut from Breaking Bad (and now Community) shows Hopper footage of Rita being shot, then Hopper's sister (not being shot, just, you know, we know who else you care about)--he's supposed to confess to killing Garza. Injected with sedative, then alarm clock, 6:17 again. Bird on windowsill, trips over gun, garbage truck and joggers--Hopper's already onto (and namechecks) the deja vu. Missed a marker the first time: news report about a Sig Alert on the TV.

Hopper remembers the soapdish and manages not to break it. Goes home, newspaper headline, ransacked apartment. This time he finds the planted gun in his closet, takes it and drops it in the ocean. But, there are a couple guys staking out his place--not cops.

At hospital to find Rita, he sees the woman from coffee the day before, he didn't slow her down so she was in her car when the bus hit it. Consequences already.

From his jail cell, Hopper sees O'Reilly. Dude's staring at him like he knows weird shit is happening... or maybe he's just high.

Elevator confrontation again. Hopper gets away. Goes to Andrea's house.

"This day's over. You gotta worry about tomorrow." Andrea's line that is a little too on-the-nose.

Extra setup for Day Two: Hopper's been working on some federal gang-related thing. Some guy named Damon turning on the Disciples. Goes to see Damon, Damon gets killed, and Hopper is abducted again. Day ends the same as before, footage of Rita shot, Ehrmantraut repeating, "Decisions, Consequences, Decisions, Consequences." Next resumption skips the markers--we get what's happening and so does Hopper. Cut to Hopper and Rita heading out of town. But suspicious cars on the highway get in the way. And, cliffhanger.

One of my intended asides from yesterday: My daughter Saer comes up to me yesterday and mentions how she just realized one of her favorite books ever--11 Birthdays by Wendy Mass--involves a time loop. Been a while since she read it, so she hadn't thought of it in relation to my daily movie (which she has come to memorize a lot of now, from repeated exposure). Publishers Weekly's review of 11 Birthdays actually begins, "Like a Groundhog Day for middle grade readers, Mass's... winning story features a girl seemingly trapped in her 11th birthday. Seems the main character, Amanda, has spent every birthday with her friend Leo (they were born on the same day, same hospital, and their families met at the Magic Castle Birthday Party Palace a year later), but a falling out has them celebrating separately this year. Enter a bad day for Amanda--a failed gymnastics tryout, her mother getting fired, and friends leaving her party early to go to Leo's. 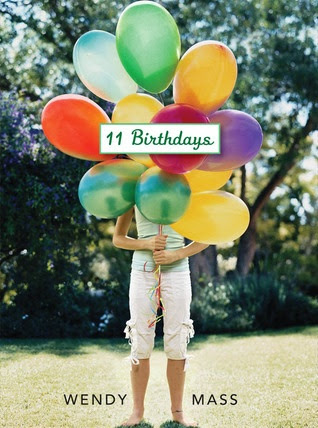 Turns out some magic local woman (this is the first of four books by Mass set in Willow Falls and involving this magical lady) by the name of Angelina D'Angelo (presumably related to the similarly meaningfully named Stephanie DeCastro) has done some magic that makes Amanda and Leo have to deal with things together and patch things up to escape the time loop. Groundhog Day by way of an after-school special.

Amanda and Leo--I haven't read the book so I don't know who was at fault and I choose to blame them both--should have learned the lesson of Groundhog Day as Chris O'Shea spells it out in Vulture, 31 January 2013: "The moral of Groundhog Day? The easiest way to prevent undesirable time travel is to stop being a jackass." Then again, Brett Hopper is hardly being a jackass

(Had I only seen this one episode I watched today, I suppose I could assume that maybe he actually killed Garza and is covering even when just the audience is watching... actually, yeah, he only throws out the gun after knowing the police found it the previous day--that doesn't mean it was planted; it could mean he knows he should have thrown it out earlier. But, I have seen every episode before and--SPOILERS--he didn't kill Garza.)

and I think Phil is nicer than people (and sometimes even I) give him credit for. He does seem genuinely thankful about Rita getting him a room at the Cherry Street Inn for example.

Benesh (2011) writes, "Phil walks by the ice sculptures of Punxsutawney Phil, and does a double-take (he looks twice at his double, which is also reproduced multiple times)" (p. 97). This has nothing to do with the stuff above, but I figure I am almost done breaking down Benesh, so I might as well start mixing things up. Figure I'll try to watch an episode of Day Break or some other time loop thing and divide my space. Not as strictly as today, with numbered sections, but I had some small stuff I wanted to cover, like the 11 Birthdays thing, that cannot fill an entire entry.

But anyway, this one sentence gets two Xs because Benesh is not only wrong but redundant. Phil does not do a double-take so he does not look at his double twice. He looks at the line of Phils and just keeps looking as he walks.

Today's reason to repeat a day forever: to count each hour, each minute, and give them names as if they were DVD chapters. Which is a weird thing to say at the bottom of today's entry in which I simply used Roman numerals to number sections. Perhaps I will name the subsections next time.