Meanwhile, I went to the Los Angeles Times Festival of Books today, met Stephen Tobolowsky, got his autograph.

And, Chad's and Rita's last name is Shelten, not Shelton. Who knew?

Tobolowsky read the story "It's Not My Dog" from his 2012 collection, The Dangerous Animals Club.

Hopper just ran into Margot, who apparently did not get hit by the bus today (maybe he called her offscreen to warn her). Is she the "she" in this episode's title, a little diversion from Rita?

Hopper-less scene, Rita and Chad go to see Billy, Detweiler is there.

Before Tobolowsky started the reading, he mentioned that he's got 2 rules for his stories: 1) they are all true and 2) they all happened to him. He said something like he's had enough of the lying "friend of a friend" and its descendant, "the internet."

Apparently, the event that's been hinted out a couple times from 4 years ago involved a body in a trunk, Buchalter (still a cop at the time), and Chad says Detweiler helped bury the body. Rita's been hiding whatever it was.

Back to Hopper and Damian just left Nick with him.

Another interesting thing I wrote down from Tobolowsky's thing--apparently this is a line from the short story; just checked the book:

A lot of the ways we live and react come from seeds planted in childhood. This idea is not new. It's an idea that in just about every country-western song. Country music is the final repository of a good idea before civilization drops it. It's why a good country song can always make you cry. It reminds you of something you never should have forgotten. (Tobolowsky, 2012, p. 316)

And, Margot's back again. Hopper found her tied up. There's some grand jury case (hearing tomorrow) about corruption at city hall... she mentioned way back in the first episode that she works for a judge.

But, nevermind Day Break for a moment. I'm not the biggest fan of country music, but there is the occasional country song that I like. Those songs come in two major groups: 1) stuff I heard growing up because I grew up on songs from the 50s (from my mother) and country music (from my father), not to mention 70s and 80s rock (and maybe a bit of disco, from my older sisters. 2) stuff that came when I lived in Tennessee and Arkansas for a bit because of the girlfriend the preceded my wife. Like I said yesterday, sometimes new people bring new stuff into your life that sticks. I didn't shift to listening to nothing but country music because my girlfriend and everyone else around (not to mention the radio stations) listened to it, but I was definitely more open to the genre after my stay in country music territory.

Quick spoiler update for Day Break, seems Rita killed her abusive father (Billy's her brother) and Hopper just admitted his father killed himself rather than being killed on the job. Chad helped Rita's thing go away. And, Coburn (attorney that was working with Hopper a few episode ago) helped as well. Now, a Hopper-less scene with Coburn and Booth. I guess Coburn is the guy at the top that Nick mentioned. But, the new bit of information here is that they've still got an inside man. And, now Hopper gets information from Margot about the grand jury case and the thing I hoped wasn't the case is now the case. Spivak--relatively major character (Choi's partner, and played by Mitch Pileggi) who has done nothing I've needed to note in my recaps here so far--just became a major plotpoint.

Speaking of Mitch Pileggi, I've got his signature also. Went to a couple X-Files conventions back in the 90s, got a lot of signatures. Today, by the way, I got Tobolowsky's signature on a copy of his book and on my copy of the Groundhog Day script that's already got Bill Murray's and Christ Elliott's signature. Had I remembered to take the script with me to Woodstock, I'd have Danny Rubin's signature on there as well. Maybe next year.

Hopper tells Chad about the grand jury, points him at Spivak.

And, stuff happens. I suppose I could at least spare some of the details for the final episode. Instead, as Hopper questions Garza's wife, I will mention that when it got to the Q&A portion, after Tobolowsky had finished his story, the first question was "Did you go pro with that belly button trick?"

He was also asked if he was ever going to have a starring role in a movie. Part of his response was interesting; he said it's not so good to be the star of your own film because they attach the financial success or failure to your career.

Damian's guy knocked Hopper out and he just woke up tomorrow. Less than 20 minutes left.

The last bit to be figured out: Chad planted the gun in Hopper's apartment, because the conspiracy had what he did for Rita over him. Montage at the end shows us Booth is going away, Detweiler's gonna kill himself, but El Lloron and Chad both get away (after being captured).

Hopper confronts Coburn... ending with Hopper: "This isn't over." Coburn: "Today is."

Regarding the end of Day Break, with El Lloron loose and the unexplained return of Jared (homeless looking guy who was also experiencing the loop) in the final scene, there's room for a second season. But, I've got a couple problems with that: 1) no explanation for the time loop, not even the metaphysical one we get in the subtext of Groundhog day; Hopper doesn't have to improve himself, it doesn't even seem that important that he solve this particular conspiracy; in fact the grand jury hearing might have actually happened the next day no matter what Hopper accomplished. So, aside from the high-concept premise, there is no reason for the loop, not within the story and not even structurally outside the story. It just is. 2) If it just is, then what happens in a potential second season? Does Hopper get stuck in another time loop two days later? Does someone else get stuck in a time loop and now Hopper and Jared both exist on the periphery as knowing helpers? Does the story jump to some other overly complicated conspiracy? As the camera panned away from Hopper and Rita and Jen going into a restaurant and a figure emerged in the foreground, I rather hoped it would be Hopper's father (though I guess we never actually saw what he looked like), because that would add an extra mystery that would actually change the story; Hopper's father's death by "suicide" being a lie would have shifted the conspiracy a notch and maybe provided a detail important enough to be worthy of a new time loop. But, as it was, while I like the show, the time loop itself, such a huge part of the premise and the story, has absolutely nothing to do with the plot. The conspiracy we get could have been discovered in as many days taken in proper order rather than repeating. 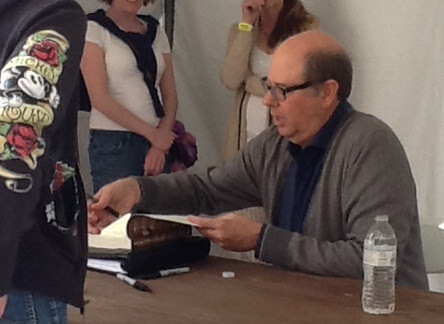 When I asked Tobolowsky if we would also sign my script, by the way--showing him one of my Groundhog Day Project cards, which prompted him to ask about my blog--he replied, "you know it!" He marveled that I also had Bill's and Chris's signatures and then asked me if I knew where Andie was living these days. At this point, I'm certainly an expert, if not the expert on Groundhog Day (its content at least). I suppose I should be expected to know stuff like that.

Today's reason to repeat a day forever: to discover conspiracies... all of them.