I had a thought today that really there's nothing wrong with any of us. We have, as a society, decided certain things are wrong, certain actions, certain thoughts. But, those things differ from culture to culture. Sure, there are universals. Murder, for example--it's wrong everywhere. But, I don't think anyone comes to murder--to stick with that example--lightly or, necessarily, deliberately. The final act, even the plotting may be deliberate, but a whole chain of events leads up to such an act. I'm reminded of a passage from More's Utopia:

If you allow people to be badly brought up and their habits to be corrupted little by little from childhood, and if you then punish them for crimes to which their early training has disposed them, what else is this, I ask, but first making them thieves and then punishing them for it? (p. 11)

I don't normally involve political notions in this blog--maybe a little when I wrote of homelessness (here and here)--and really I think I would like to argue that this isn't even political. A while back, just after I had returned from my pilgrimage to Woodstock, where they filmed Groundhog Day, I wrote the following:

Just yesterday a friend of mine--a member of our speech team, actually--who has never seen Groundhog Day (didn't even know what it was about), asked me what the point of the movie was. At the symposium on Saturday with Danny Rubin as special guest, someone asked about what made a movie a classic. I think the answers to these two questions are fairly close in this case. Groundhog Day is a classic because its main idea is a very simple one that we can all understand--we all want to be better than we are. The theme is universal, and the film is well put together, so it holds up time and time again, even now 21 years after it was released, 22 years after it was filmed there in Woodstock.

I don't operate under the assumption that anyone means to be bad or means to do wrong. I think, sometimes, that assumption does more damage than some of the supposed wrongs being done. If we can call what someone else does bad or wrong, we can excuse wrongs done to that person, we can justify punishment, mistreatment, violence and war. Fiske (2002) writes:

People typically seek other people who are similar to themselves, being comfortable with others they perceive as members of their own in-group. From comfort follows, at best, neglect of people from out-groups and, at worst, murderous hostility toward out-groups perceived as threatening the in-group...

We delineate our in-group from a particular out-group quite easily by that group doing something wrong, something differently than we do it. It doesn't have to be the above example of murder. It could simply be the way they worship their god, or the name they give him. It could be the way they wear their hair, the clothing they choose to cover themselves, the food they eat or don't eat, the songs they like or don't like, the fashions they can afford or not afford to wear. Anything. We are a petty species, humans. As much as we so obviously, so painfully, want to find people with which we can feel a sense of belonging, it seems like we often want to find an excuse, any excuse, to exclude the ones who don't belong.

Phil Connors may not be the most friendly of men, pre-loop, but you could call him an equal opportunity insulter. He points his sardonic and sarcastic wit, and his projected self-hatred, at everyone. For Phil, there is no in-group, only out-groups. It is not a great lesson to take from Phil, but aside from that one punch to Ned Ryerson, he doesn't turn to violence in the film, and ultimately, he learns to appreciate everyone and dial back the acid in his tongue. Speaking of Ned, though--and in today's viewing, that punch has just happened--I wonder now how wrong it is that we all find it so funny when Phil hits him.

(Nevermind how wrong it may be that we laugh when Phil makes Ned uncomfortable later by hugging him a little too much... our homophobic tendencies in action. Also, how wrong is it that I am suggesting something is wrong?)

The situation plays a little differently in Rubin's original script. Phil hits Ned every time he sees him, because the story begins in medias res, and when he eventually refrains because he (Phil) is becoming a better person, only to learn that Ned is an insurance salesman, the punchline comes in the scene without the violence. Still, the punchline comes from our... distrust? dislike? of insurance agents. They--Ned the current exemplar--are like ambulance-chasing lawyers, bottom-feeders who take advantage of our weaknesses and our frailties. Right?

But, what do we think of them when we need an insurance payout?

As a writer, I subscribe to the idea that no one is the villain in his own story. This story--Phil's story, my story, your story--there is no villain. There is the societal--or is it natural?--tendency toward competition. There is circumstance that puts us one against another. There is circumstance that leaves some of us better off than others, some of so desperate to survive, or so corrupted by our selves, that we turn on one another, take what isn't ours, manipulate circumstance to our advantage, another's misfortune.

One of the reasons, if not the reason, I want to be a teacher, is because I want to make people better than they are. No, that isn't quite what I mean. I want to help people become better than they are. I don't really want to make them anything. No one makes Phil Connors improve himself. Whether he does it because he has run out of all other options or because he sees the light and realizes there is a better option than what he has been doing thus far, he does change. He chooses to change. No one makes him.

This is part of the reason, early in this blog, that I so adamantly disagreed with, say, Bacha's (1998) suggestion (after the "date night" sequence) that "Phil thinks he must find a way of making Rita choose him and surrender him completely. He thus becomes the admired one in the community. He believes that it is not enough to pretend goodness, he must be good" (p. 396). If Phil is merely improving himself as one more step in his attempted seduction of Rita, then he is not a good example for the audience. And, though he is arguably rewarded when Rita does become the "chooser" as Bacha says, and she chooses Phil, we see this as a bonus of a sort. Phil deserves something, some reward, because he has managed to do what we all wish we had the time to do. He has transformed himself into someone better. No one forces him. He does it because--and I do not here choose this word lightly--it is the right thing to do. 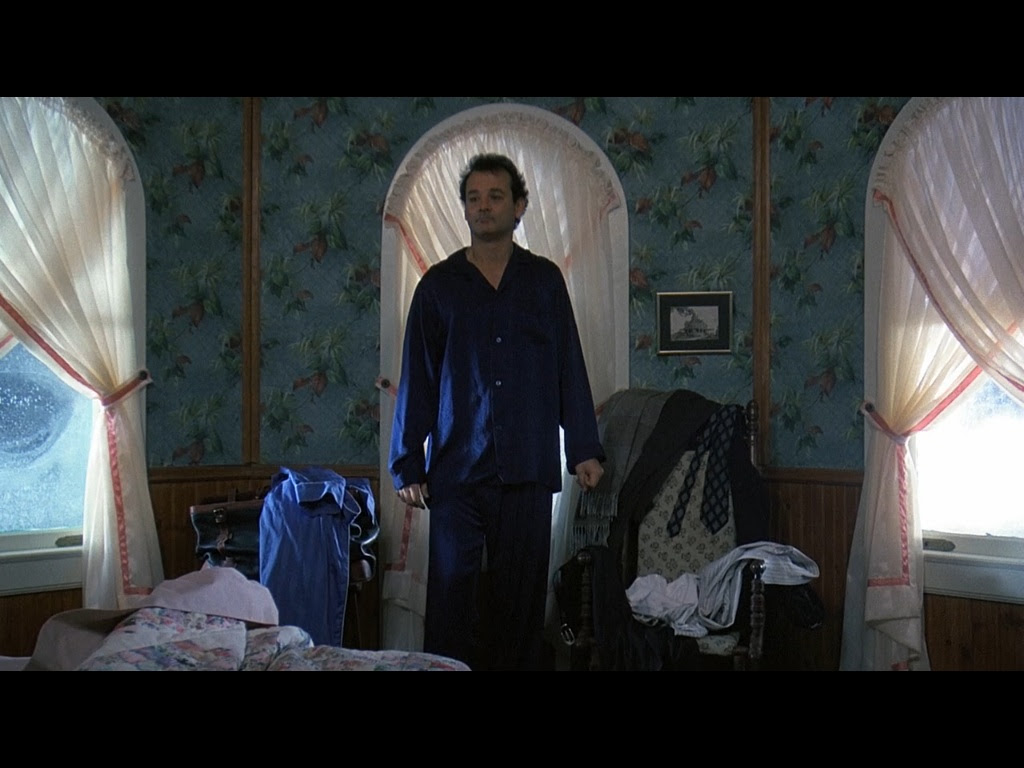 (Phil even has, there, a halo of sorts, as he stands ready to make himself and things around him better... perhaps one more link to Phil as Christ-Figure.)

Today's reason to repeat a day forever: to do nothing but right, to better myself and everyone (and everything) around me.