don't you forget about me

Let's work backward. Start with another 30th anniversary screening tonight--made it to the sold out 7:30 show this time and it was nice watching this movie with a crowd. Run back through the past week of viewings, seven times in seven days, keep going back three decades, a viewing now and then, not as many times as I've seen some movies but more than others. Back to 1985, February 15--the day The Breakfast Club was released into theaters. Keep on going to March 24, 1984, the Saturday on which Andrew Clark, Claire Standish, John Bender, Allison Reynolds and Brian Johnson sat down as strangers in Shermer High School's library and left as friends... perhaps to become strangers all over again come Monday. Go back further to... 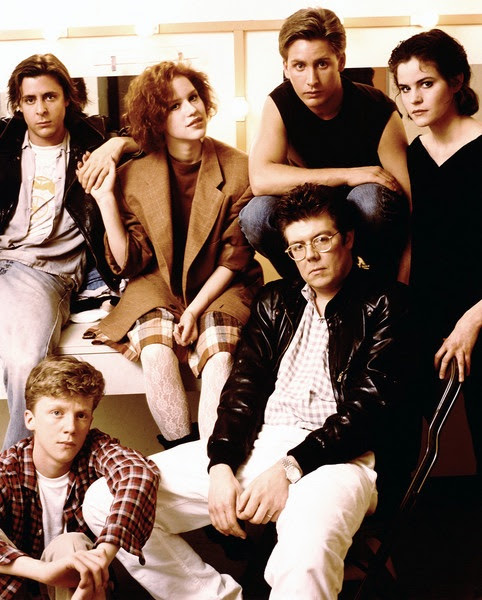 Actually, the screenplay draft I found has no date on it. It's not the shooting script. It still has Robin Robertson in it--

(March 25, 2015, Karen Leigh Hopkins tells The Hollywood Reporter about how she was cast as a gym teacher (character, according to her, was a swim instructor before she was cast, so the script I've got is probably pretty close to the shooting script; Robin is a gym teacher. Robin operates as a weird feminine object in a sequence that... actually, I'm not sure how much of her part was filmed. Some of it was, according to her account.

Hopkins references a New York Post article and John Hughes: A Life in Film saying that her character was "there to provide a gratuitous nude scene where the kids sneak out and watch me showering through a peephole." No such scene is in the script I've got, and Hopkins says, "What shower scene? I don't remember one in the script, and I never filmed one... There was a provocative scene in the script where the principal was meant to watch me working out but that scene didn't get shot." The script I've got does include a Saturday gym class and Vernon even has binoculars to watch some of it--Robin as teacher, and then working out in the weight room; he's not spying on the students. I'll give you just one example:

Robin's on the chest machine. Her arms are outstretched, her triceps are bulging. It's a beautiful sight. (p. 95)

Robin's important bit in the script, aside from making Vernon seem like more of an adolescent than any of the Breakfast Club folks, comes when she visits the library after Vernon injures his back (in that same weight room). Her important bit begins with this line: "I wasn't born a teacher, you know. I was once a normal person" (p. 116). Humanizing teachers by way of a supporting character who has only a tangential link to the plot. Regarding the students and their detention, she explains:

I think a lot of times teachers dish out punishment as though it's going to cure a problem. However, people don't obey rules out of fear of punishment but out of a sense of responsibility to themselves and to society. (p. 117)

She offers dialogue, and questions whether anyone else ever did. Then, she's got this:

This is a very small part of your total life's history. You can't possibly see that while you're going through it. But it's only four years. When you graduate from her, you've got another sixty years left of living to do. The screw-ups you make today are paid for tomorrow. As you get older... you'll look back on these years as the best of your life. I swear to God. As shitty, pardon me, as you might think things are now, in ten years all you'll remember is how great it was. (p. 118)

Robin serves a purpose that Vernon absolutely cannot. She's someone who has made it past high school into adulthood and still has a sense that the teenage years matter. But, she was cut from the film. What Hopkins calls her "wise speech John wrote" never made it to the big screen. Robin Robertson and the objectification of her body (even without any gratuitous nude scene), were left out of The Breakfast Club.)

--or maybe Hughes allows so many changes on set that this is the shooting script. I don't know.

It's Day 7 with The Breakfast Club--not to mention, the last day of my month with teenage comedies from the 1980s--so I'd like to be talking something philosophical, what do these movies mean and all that. I'd like to deal with what this movie has meant for thirty years that it is worthy of sold out anniversary screenings. But, I read whatever version of this script is tonight and I'm distracted by a whole lot of sexist and homophobic stuff--not uncommon in 80s film, of course--and so much so that I almost titled this Day 7 entry

but I don't know how much I want to go in either direction... either being a choice between the philosophical thing--short version: don't be a dick to a person just because he/she may be different from you, you've all got the same basic shit to deal with, and you can probably relate to the differing specifics if you take the time to have a fucking conversation--and getting into the sexist bullshit...

In the script, rather than actually mean it when she says it's okay for a guy to be a virgin, Claire--Cathy, in the script--is a little sarcastic about it. See:

BRIAN
(relieved)
You do?

Normally, I'd dismiss some of the more sexist stuff, because it's the 80s and we hadn't gotten better at dealing with some of this terminology. (For the record, the film does a better job than this script does.)

Not on the homophobic--or at least casual use of "fag"--front, but something... else. There's this description of a scene that does make it into the film:

HIS POINT OF VIEW

A perfect shot straight up Cathy's skirt. An older man would have cardiac arrest. Baby blue panties. An excruciatingly tender bulge. In his entire life, John will not duplicate the raw power of this moment.

There's something a little strange... not about John Bender's experience herein, necessarily, but about John Hughes writing it.

Or there's John saying that while some of the girls in photos in his wallet are his girl friends, others are "transvestites." Or there's more detail about Brian's "nudie picture"--it's apparently a closeup on the genitals of a woman because "a whole woman doesn't fit in a wallet" (p. 87). If that isn't objectification and dehumanization by way of pornography--and I'm not one to suggest that all pornography amounts to either of those things, necessarily--then I'm not sure what is.

Anyway, The Breakfast Club and Ferris Bueller's Day Off and Fast Times at Ridgemont High and Porky's (and probably many many more teenage comedies from the 1980s and beyond) all have something in common; they all suggest that teenagers a) want things that adults might not want them to have and b) are actual human beings who just might deserve the opportunity to go after what they want and c) shouldn't have to deal with the world and parents and teacher and peers telling them who to be but d) definitely are told who to be by anyone and everyone around them. What matters, really, since we're not all teenagers, is that we all have to deal with the same bullshit. Society tells us who to be. We resist or we give in. We become who we are despite the outside pressure. We cannot ignore or avoid it. We can just stretch and mold ourselves until we fit in a slot that society makes for us... and maybe, if we're lucky, there will be room for us to be ourselves, to be who we want to be. We cannot break the mold but maybe we can squeeze out of it from time to time and enjoy life in a world with so many other people trying to do the same damn thing.