he'll save every one of us

(This month, I'm doing things a little differently; I will be watching 10 films--each recommended by someone else, each one for three days. Today starts the second of these 10 films. The first one was The Room.)

To start, I must say, it's amazing that Ming's computer readout labels are written in English. I mean if we didn't see the label EARTH QUAKE, would we have been able to guess how his actions destroyed that building on his screen? Without VOLCANIC ERUPTION, would we have know that was a volcano erupting? And, without HOT HAIL, would we have... actually we probably would have been really confused because hot hail is not a thing. If Ming can make hot rocks fall out of space, out of nowhere basically, no football player is going to save us. The premise almost immediately plays as ridiculous.

Plus, there's the whole racism angle with the character of Ming the Merciless (and many other characters in the old comics and serials), but I will be dealing with that. Tomorrow probably.

Today, I imagine some random notes as the movie plays. I have seen this movie more times than I can remember. (But, not as many times as I've seen Groundhog Day.)

For example, Dale and Flash match, with their white and red. Zarkov's lab has already had two American flags visible in like a minute. It's like the filmmakers looked back at the racist angle of the old Flash Gordon comics and thought, good ol' American football star fights an alien menace that seems a lot like Fu Manchu... brilliant!

Nice parallel, Flash crashing the plane into Zarkov's lab at the start of the film and crashing that alien ship into Ming's palace at the end. He should a) really learn how to land but b) maybe not, because this seems to work out for the best.

Dale gets her knowledge from TV (It can't be an eclipse because there was nothing about an eclipse on the TV and she knows who Hans Zarkov is because he was on TV). Very American.

Good miniature work with the lab and the rocket. The landing as well.

Weird design choices before the rocket's in the "Imperial vortex"--they should still be in our solar system, but there are multiple planets and/or moons visible.

Cheesy costumes, but they are all so consistently cheesy that it works.

So, the red gas mask guard guy has a weapon/tool that can manifest hands out of nowhere to grab you. Again, against that kind of technology, there is no way some football player can save us.

Essentially, we can assume that Ming's Empire has achieved a sort of forced racial harmony. There are overt visual differences between the various cultures, but they all show up to pay tribute.

Given that this movie was made not long after Vietnam, I could almost come back to the big theme of my month with 1980s action movies--American hegemony (and masculinity) had been challenged by that loss, and now we had to prove we were great again. Flash Gordon, in serving that purpose, is rather perfect. (Plus, Dale is almost immediately sexualized by Ming, and Flash calls it "pretty sensational.") Football star makes for a clearcut masculine leading man. He's not only white he's "fair haired." He's the perfect figure to battle against the alien menace.

Ming is not actually so alien, of course. He calls upon "the great god Dyzan" and while that name does refer to Mongo's god of light, life and war (the other god common to the various Mongan tribal pantheons is Tao, god of darkness, death and assassination, but really, they are all supposed to worship Ming because he defeated the gods and made them bring life to Mongo), the name Dyzan also comes from Lovecraft, who probably got it from a purported ancient Tibetan text supposedly discovered by Helena Petrovna Blavatsky. Ming's name, of course, also seems an obvious reference to Earth--the Ming Dynasty, a blatant tie to China. In the 1932 film The Mask of Fu Manchu, the villain tells his men to "kill the white men and take their women." (The Chinese embassy in Washington formally complained.) Ming is following suit. He executes Flash the night he arrives and adds Dale to his harem.

More on the race stuff tomorrow. For now, I've got to wonder why Zarkov is specifically spared death and brainwashed instead. Wouldn't he be more useful with his knowledge intact if they're going to let him live? 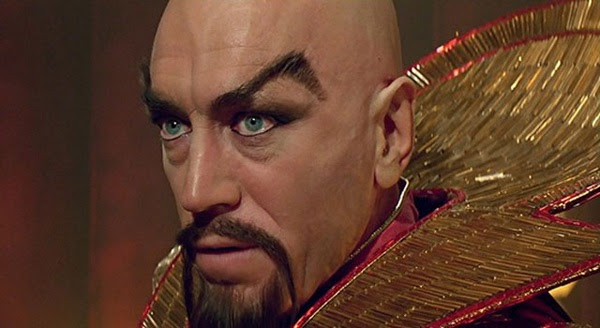 I don't know the answer. And, despite some obvious racist origins (to be debated tomorrow), this movie is a whole lot of fun. Simple premise. Straightforward plot. Colorful characters... literally.

One last note: Flash's color scheme after he has died has switched from red/white to red/black. (Meanwhile, Dale in black is supposed to marry Ming in red in the third act.) Zarkov has gone from white costume to red as well. Really, there is just a whole lot of red in this film. Red walls, red floors, red costumes, red clouds. A bit of black here and there, and various other colors in the background characters in the Imperial court. Green with the Arboreans. Not much blue. I don't know if that means anything.

Okay, one more. As a kid, I wanted a sequel. That question mark at the end of this film suggested one and this was the kind of film I liked when I was young.