it's not in the cards for me

It's interesting that the CliffsNotes for The Notebook suggests a religious theme to the story. On the surface, I don't think there is one... at all. Sure, the swan could be taken for its Christian symbolism (though I am not at all sure where that association comes from; some versions of the Bible list the swan among unclean birds but otherwise, the swan is not in there), OR it could be taken for its symbolism in that swans supposedly mate for life. (Plus, the whole migration thing I already mentioned yesterday.) Taking the presence of swans together with the clothing at Allie's family dinner, we get an interesting thing, though. While Fin and Sara dress in white and blend right in with all the rich folk, Noah wears black, standing out like a black swan--which in science is an unpredictable outlier (or something like that). Let us assume that Noah is not an unexpected thing existing simply to disrupt Allie's life... but not go so far as the CliffsNotes author who brings up fate as if this story has anything to do with that. 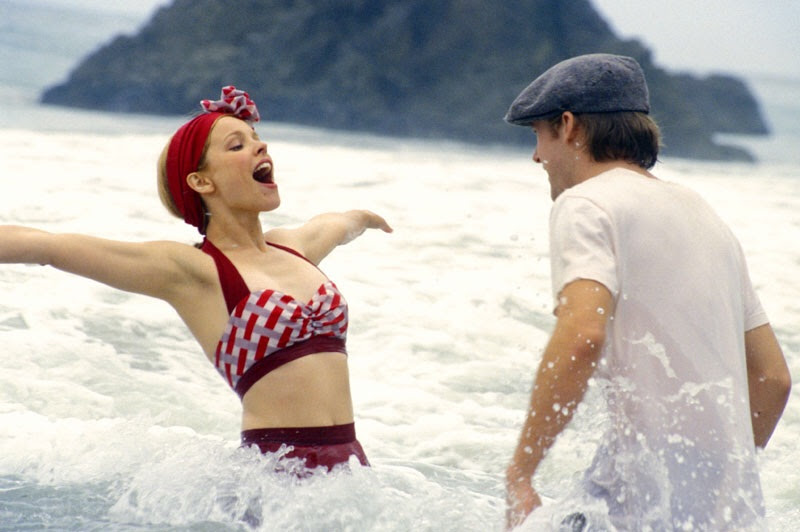 Anyway, yeah, I don't think that there's any religious theme in this story. Not on the surface. But, the faith inherent in love, especially a) the lifelong love in Noah's and Allie's story and b) the love we see all the time on film, is a bit like religion. There's nothing objective to base it on, it's all just a feeling that we latch onto because it makes us feel good about life...

And, I really don't feel like taking the comparison any further. Cinematic love is simplistic and foolish. It's as simple as that. Oh, there are exceptions, movies that really seem to involve something deeper, but ultimately, even that is based on our misguided notions of romance in reality. Love ain't a thing. It's just a word we use to describe a whole set of other things that together become quite complicated.

And, obviously, I'm feeling a bit cynical about that whole thing today. I'm too busy for it even if I believed in it right now, anyway.

Noah and Allie never even get married; seriously, she's still "Miss Hamilton" at the nursing home and there is absolutely nothing in this movie that suggests a feminist notion like her keeping her family name. And, she forgets who Noah is. That is not romantic. It's tragic.

It's also tragic that this movie just isn't that romantic. This ending also goes on way too long. Maybe, instead of skipping past people falling in love earlier you could have cut down the old people part of the story.

But anyway, I am done with The Notebook. And there is only one more movie to go for this month of recommendations. Then Groundhog Day, then a new set of movies back on the usual schedule, 7 days each.