there are no rules

(This month, I'm doing things a little differently; I will be watching 10 films--each recommended by someone else, each one for three days.)

This is a bunch of rich people. Let's get that out of the way up front. I mean, they're still humans, and it's easy enough to empathize with them when they are in danger. We learn pretty young to idealize the rich; it's no coincidence that so many of Disney's animated films are about princes and princesses. It goes right along with the whole protestant ethic...

...which I did not want to write about today. But it has to be said. This entire story is a fantasy. We have to identify with these rich people spending tons of money to play, and then we can fantasize about being them right alongside fantasizing about being at Delos, in one of those three worlds.

Actually, that's a reasonable segue into what I did want to talk about one this, Day One with Westworld.

Fantasy. The other day I suggested that Flash Gordon was supposed to be a science fiction adventure, but the thing is, there's not really any science to it. It's no more science fiction that Star Wars is.

Insert here the gasps of a whole lot of Star Wars fans.

the literature of the human species encountering change, whether it arrives via scientific discoveries, technological innovations, natural events, or societal shifts.

Science fiction is the literature of ideas and philosophy, answering such questions as, "What if?" or "If this goes on...," and is thus sometimes more interested with exploring ideas than developing plot or character, if the memes and ideas under examination are powerful enough to sustain the work.

Science fiction... provides the tools, tropes, and cognitive framework within which we can explore ideas and safely run thought experiments where we cannot or ought not in real world experiments.

All that is to say, science fiction is fantasy grounded in science, in real world ideas as opposed to, say, magic. Flash Gordon presents the magic as something like science; the presence of computers suggests the rings that can manipulate matter and people's minds seem like they could be scientific and not magic. Except for the story to work, the difference is irrelevant. Even the presence of a mad scientist--Hans Zarkov--suggests a monster movie more than science fiction film, though the division there between can be quite narrow sometimes.

While Flash Gordon has a sort of blatant goal of being science fiction, the science fiction-like parts are just a setting for a basic action adventure story. Similarly, what I remember from watching Westworld many years ago is something far simpler than the film is turning out to be. I remember the robot cowboy turning bad, trying to kill people. The movies is half over right now, and aside from his very brief reappearance after being killed the previous day (plus a conversation between some Delos employees about malfunctions among robots)... and now a robot snake biting one of the main characters, there hasn't been much inkling that things were going wrong.

I remember something structurally like Jurassic Park... which, come to think of it, does spend a good while before things go badly, doesn't it? And, it's not a coincidence that these two films have similarities. Michael Crichton wrote and directed Westworld, and Jurassic Park is based on his novel. Runaway, which he also wrote and directed, has a similar setup--technology/science run amok. The key here is that a) the science is presented as plausible, with just enough explanation for it to work and b) the science is being used to comment on human existence, something a little more philosophical than Flash Gordon's "let's team up and defeat Ming" storyline. This film is taking its time, showing us what the humans in Delos are doing with the freedom such an amusement park gives them. They revel in violence, in sex, in drunkenness. They flout the law and actively seek out what would, in the real world, be not only illegal but immoral. John and Peter--and with such biblical names, too--provide us a clear picture of what we might do if there were no limits. And, the technology that makes it possible, even back in 1973 when this film came out, is just plausible enough to seem likely. We still haven't gotten there, but imagine if we did. 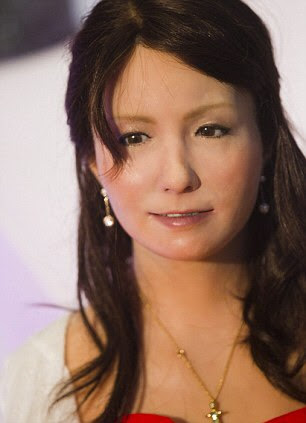 Geminoid F, who can express herself with 65 different facial expressions, exists today.

On the one hand, we'll want robots to clean up after us, take the place of our Roombas and do more than just vacuum. Then, of course, we'll want to have sex with them. We kind of want to have sex with everything eventually. Along with sex comes the propensity and motivation for violence, so that will come sure enough. We'll certainly want some themed setups for all of these robots we're fucking and fighting, so, yeah, we'll get to the western setting, and the medieval setting. Probably a superhero setting, or something like Flash Gordon or Star Wars. I'm guessing Emperor Palpatine has a nice harem just like Ming does, and take a look at cosplayers sometime and tell me there won't be a nice Doctor Who or Sherlock robot out there. But only for rich nerds at first, only the geeks with money. It will take a long while before it's really democratized. There might be cheap knockoffs, but it won't be the same.