people are very strange these days

(This month, I'm doing things a little differently; I will be watching 10 films--each recommended by someone else, each one for three days.)

I think Cinema Blend says it best: "There are two types of people in this world: those who haven't seen The Room, and those that have truly lived."

If this video of clips does not intrigue you a) you are not human and b) you will not enjoy The Room.

I'm not entirely sure what the "plot" of this movie is, and I have seen it before. To understand this movie, you gotta know about Tommy Wiseau. He's a quadruple-threat like Quentin Tarantino; he produced, wrote (supposedly based on a his 540-page novel), directed and stars in the film as Johnny, a banker, whose fiance Lisa (Juliette Danielle) thinks he's boring so she seduces his best friend Mark (Greg Sestero). Then there's a awkward teenage neighbor Denny (Philip Haldiman) who has a crush on Lisa (and maybe Johnny), and Lisa's mother who "definitely has breast cancer" even though that has nothing to do with anything else in the movie.

Plus, there's the football. And, far too many football tosses. 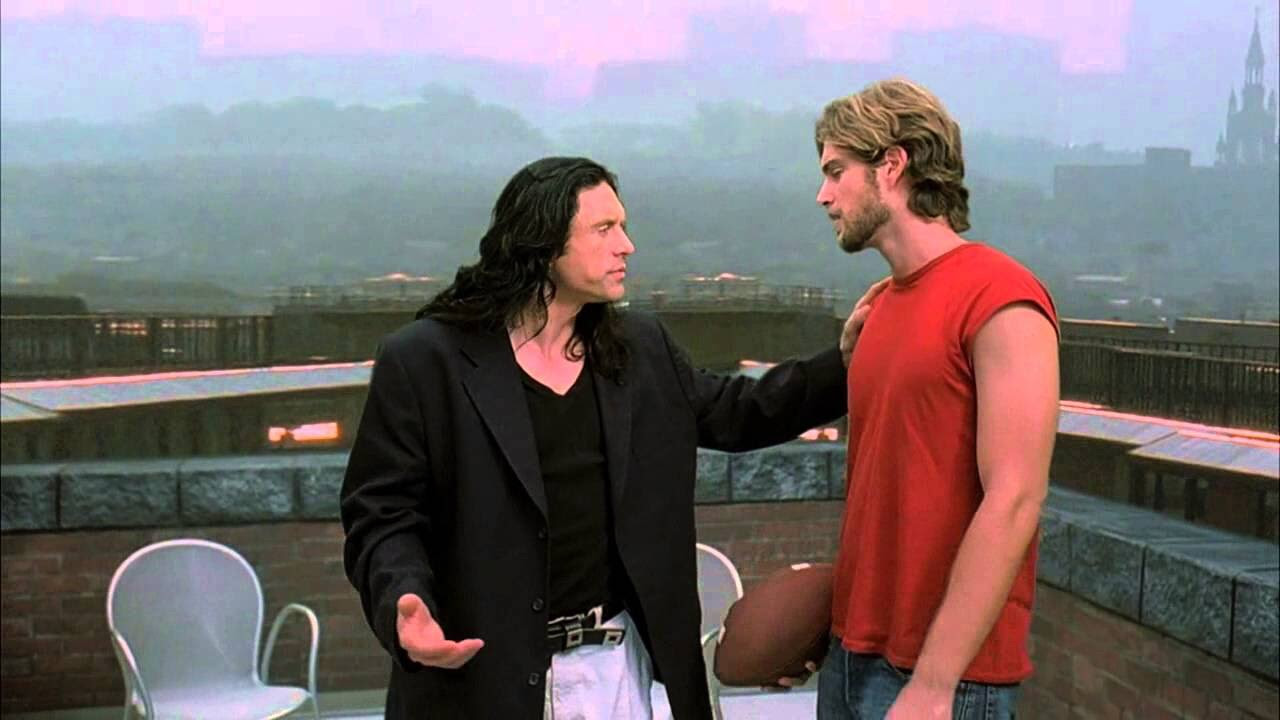 And some really bad songs and some awkward sex scenes and sounds during said sex scenes.

The Room may just be the most important film ever made. Wiseau himself tells BuzzFeed (by way of Reddit), The Room "is a red flag for society, for people to do better, to be better to each other basically." Except, no, the film is not about that. It tries. Johnny tells Denny, "If a lot of people loved each other, the world would be a lot better place to live." And, it seems like he means it, and that Tommy Wiseau might have meant it when he wrote that line.

Got sucked into the madness of this film for a while. Sorry.

Aside from the bad writing, the lazy editing, and horrible acting, the film also has a few blatant structural issues. For example, we know that Mark is Johnny's best friend (or vice versa, rather) only because Mark mentions it a few times. We do not actually see Johnny and Mark together until later. Denny apparently has a girlfriend, a fact that matters only at the end of the scene in which he tells Johnny that he is in love with Lisa but never gets mentioned again, and the girlfriend never shows up. Johnny announces at the birthday party in act three, "We're expecting" when Lisa has not told him she's pregnant (and she's not pregnant).

Ultimately, the film's plot is so simple it could have been covered in about 10 minutes, but instead it meanders and includes a random psychologist friend, a random unnamed friend that seems to stand in for Peter because that actor was no longer available (I'm guessing), and Michelle's (that's Lisa's friend who might be the only person really acting in this thing) boyfriend who acts like a five year old.

And, the Chekhov's gun (literally, a gun) of the film is a) introduced by a storyline that is pointless and never mentioned again and b) is quite readily removed from the scene in which it's introduced; had we seen Johnny put the gun away in that box in his bedroom, maybe it would have mattered more. And, that's the thing--this film is full of awkward disconnects between scenes, between characters, between dialogue and the English language, between what you might normally think of as film and... this collection of scenes.

Tomorrow, I will try to take this film more seriously. But, it will be hard.

I am, however, glad to have the chance to try.