shoot without a script

The film version of Rent starts with a song--"Seasons of Love A"--that doesn't come until Act Two in the stage version. On the one hand, this is because a film, even a musical, doesn't have the two act structure common to stage musicals. But, this song also serves as a sort of love letter to Rentheads who will probably be disappointed by other changes made for the film--from small stuff like Mark never actually calls Alexi Darling to quit his job (seriously, though the lines are there, he's nowhere near a phone), or Mark opening up the film (after that initial transplanted song) with dialogue rather than singing; to big stuff like cutting half of "Goodbye Love" because director Chris Columbus thought it was emotional overload. Similarly, the film never explicitly lets us know that Roger's ex-girlfriend killed herself because Columbus thought that would be "too much." It's a musical about a bunch of poverty-stricken artists, many of which are HIV positive or dying from AIDS. There should be too much emotion. There's a reason Puccini's La Boheme (the source for this plot, with some obvious modern additions) and the stage version of Rent have been successful.

Columbus, I would argue right away, doesn't get Rent. It's a musical so he turns much of the lines that should be sung into dialogue, which comes across less realistic as rapid-fire dialogue than as characters breaking into song. It's like Columbus wanted to, as they say, have his cake and eat it too. Characters can break into song, as long as the songs are self-contained units.

But, then Columbus does stuff like the riot-resembling shots during the title song in which residents at the various tenements throwing their fires into the street. As should have been established in opening dialogue, these fires are all these people have for warmth because they don't, you know, have indoor heating.

Columbus isn't all bad. He frames shots fairly well, and he definitely separates the story visually from its stage roots.

I look at a draft of the script and am glad, for example, a line like the following (when the power goes out) does not exist anymore:

MARK (incredulous)
They turned off our power? On Christmas Eve?

Of course, he still rather sillily announces that there's a padlock on the door, a fact to which Roger has already drawn everyone's attention.

Ultimately, the film is good. I cannot say, for sure, how good it is for someone who does not know the stage version--I had seen it a couple times on stage before and have seen it on stage a couple times since--and it is lacking something of what makes the stage version good. But, it is still good in its own way. Mark is less of a character, and less likable; Maureen remains mostly an enigma, but that is pretty much what she's supposed to be; but other characters are given room to breathe. Roger Ebert, my go-to reviewer, in his review, makes a good point--the live audience changes the live show. The audience members and the performers can feed off one another. Ebert calls this "a crucial element of [the musical's] life-support system: a live audience." He continues:

The stage production surrounded the audience with the characters and the production. It lacked the song "We Are Family," but that was the subtext. On film, "Rent" is the sound of one hand clapping."

As for newbies in the audience, Ebert says they "will sense they're missing something, and they are." Part of something good is still prettty good, though. The songs that remain intact can still drag a Renthead in, get them (me and my daughter Saer, for example) singing along. 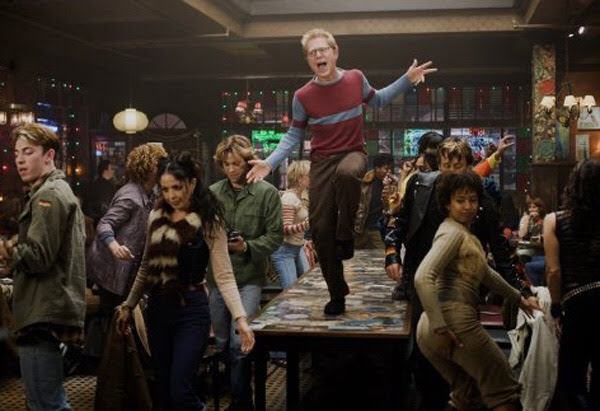 Despite Columbus' efforts to tone down the emotion, the funeral scene ("I'll Cover You") and the incomplete "Goodbye Love" afterward capture some of the emotion that is integral to the story.

I must admit that I will probably write more generally about the musical the specifically the film version over the next couple days. (I will also be traveling, so we'll see how that goes.)