time to fly or die

I don't particularly know where this film is going. But, it's opening scene intrigues me. We open on two young people, naked in bed, kissing. But the film doesn't really show us their bodies. So, we know this film won't shy away from human feeling, from sensuality, but we also know this film is probably aiming for a PG-13.

Second scene (not counting the guy from the previous scene waking up late and running to get to what turns out to be school) is a philosophy class. Hard to know if this film will succeed in being thoughtful but it certainly wants to be.

The movie, by he way, is After the Dark.

This philosophy class--it's the last day of the schoolyear--gets underway first by discussing the usefulness of philosophy then covers a few basic philosophical exercises--the infinite monkey idea, the trolley problem, some other one I hadn't heard of involving trying to get your friends to save your life--then they move on to a bigger idea (which I think is going to sustain the film as a whole). They are collectively imagining a nuclear cataclysm. They've got 21 people and a bunker for 10 and they to decide who gets to survive. Another basic philosophical exercise, but writ large.

Professor has a serious cough... prediction (not a SPOILER as I have not seen this movie before): he's dying which is why he's got his class thinking about death, the end of the world... there's something here that reminds me of The Truth podcast's "That's Democracy." SPOILERS for that: a teacher who had planned to kill himself instead comes to his class to give them a lesson in how democracy works with fatal results. 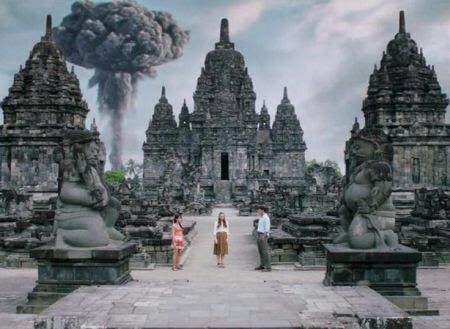 I'm wondering if there's a reason this film takes place specifically in Jakarta or if it's just a bit of cultural appropriation because we might think of that being part of the world where philosophy is a little more accepted. This is a British film, by the way. Jakarta was a major English trading center. I don't know what the location means for Brits, though. I could only guess. My most basic guess is that it seems romantic, seems like the place for a film that clearly wants to come across as intelligent.

The first iteration of the bunker exercise takes place at the Hindu Prambanan Temple. A second iteration follows. The new location is Mount Bromo (named for the creator Brahma). This as the focus is not just survival but successful breeding. In the first iteration, each student was assigned an occupation by which to be measured for usefulness. In the second iteration, they are given secondary characteristics--diseases, personality traits...

On the one hand, adding these details out of nowhere works because it's essentially the same process that goes into creating these characters in the first place. These are all actors, all playing roles. If the roles change, it's no big deal, and maybe a good exercise in characterization.

On the other hand, who these characters are inside the bunkers is somewhat superfluous. This is just a thought exercise after all. It's the Identity problem. If you've not seen that film, the premise is a bunch of people with nothing in common end up, through a rather contrived sequence of events which makes for some cool visuals, end up at the same motel in the middle of nowhere, and drama and some violence ensues. SPOILERS ahead. This action keeps crosscutting to a mental hospital, a patient being assessed. Turns out all of these people are different personalities within him. Which is a cool idea, but once we've established that none of these characters exist (even within the reality of the film) their deaths (or not) in the final act are meaningless. There is literally no reason to care anymore.

Here, there is a similar problem. When there's a conflict over the secondary breeding plan in the second iteration, while there's a nice idea there, it's a decidedly small idea in context. That Bonnie refuses to have multiple sexual partners just doesn't matter when there is no actual coupling going on. It's a problem with a lot of philosophical discussion, actually. Without something practical, something tangible to structure the discussion around, the philosophy doesn't matter.

In my middle school debate class last year, I would actually use a life raft exercise to get students to argue about who should survive and who shouldn't. They were not roleplaying like this, but the discussion also ended after about 20 minutes. No need to linger and leave time to consider the irrelevance.

Not to imply that philosophy has no relevance. But, I really just disagree with Bonnie, I guess. She argues that philosophy is not morality and logic has its limits. Morality and philosophy are both just sociocultural inventions we use to decide what is worth doing. If survival of humanity is on the line, then Bonnie loses to logic and I think Mr. Zimit was correct, not only logically but morally--but I accept that others may disagree on that last point--in saying she needed to have sex with all the males in the bunker for survival to be an option.

Third act, third iteration--an island. Notably, Mr. Zimit--an easy stand-in for God in the previous iterations--stays out of the decision-making process this time. He still turns on the humanist angle of the choices.

I will leave this Day One with After the Dark with Toby's poet's original poem recited during the third iteration:

Junk the ancient rules of thought
By which our predecessors fought
Their clashing minds did throw a spark
That scorched the world and wreaked the dark
Let no science fix our path
If only numbers make its math
Our brains will run, we'll surely see
On some sweeter philosophy
Until beneath a quiet sky
Atop the rubble we will stand
And finally demystify
The message in fate's reprimand
Even an atomic blast
Can't rub the future from the past
If with incinerated grace
We still become the human race