most complex of all the symbolic figures

"You have come of your own free will," Lord Summerisle tells Sergeant Howie. But, did he? The lies and manipulation--from an entire town, no less--required to get him on that beach just in time to see Rowan and run with her into the cave... that's one of the more complicated plans. The folks at Consumer Recreation Services would be envious. The full sentence from Lord Summerisle is, of course, "You have come of your own free will to the appointed place." Sounds like a contradiction of terms to me. Lord Summerisle also explains--SPOILERS, of course--"You came here to find Rowan Morrison, but it is we who have found you and brought you hear and controlled your every thought and action since you arrived." I think Lord Summerisle needs to get himself a dictionary and check again what free will means.

(I cannot find the article, but I read the other day someone making the explicit comparison between Sergeant Howie and the insect that Daisy has tied to a nail inside Rowan's desk, stuck walking in circles until it has nowhere to go. I think that comparison is quite apt.)

I've written about free will recently, so I won't spend too much time with it now except to argue, if the pretenses are false, I don't think it is fair to say Howie's arrival came from his exercise of free will. Even suggestions that he leave Summerisle seem to be part of the manipulation to keep him there. Just as it is most important what the Summerisle folk think is happening with the Wicker Man sacrifice, perhaps it is most important not that Howie arrive of his own free will but that he think he does. Or, at least, that the Summerisle folk buy into the idea that he came of his own volition even though they were all part of the ruse... Actually, maybe that is why the ruse must involve everyone. No one individual to have to spend too much effort lying or manipulating, except for Lord Summerisle.

Just as used to explore Tarot card references, I decided on a whim to look into some numerology. Now, even if you've seen The Wicker Man, you might not have noticed Sergeant Howie's shoulder number (his force identification number).

Joanne Walmsley, in her Sacred Scribes blog actually has an entry specifically on the number 457. She breaks it down. Four "resonates with priorities, construction and building solid foundations," she explains. Nothing for an A-HA moment just yet. She continues the list: "conviction and determination, dependability and reliability, determination [again] and patience." Those all definitely fit Sergeant Howie. He is the embodiment of conviction and determination. His first name, Neil (mentioned only once in the film, unlike Howie, which I pointed out yesterday meant Hollow), means champion; he cannot champion his cause, his investigation, without conviction or determination. He seems like he'd be dependable and reliable under normal circumstances, and he proves reliable in a different manner in the face of Summerisle's machinations. And, for a guy who is clearly shocked and perhaps disgusted when he first finds townsfolk having sex in a field his first night on Summerisle, he makes no comment just yet. He holds it in. He remains patient. Sure, he doesn't last for much longer, having an outburst the next day at the school, but a lesser man with Howie's religious convictions may have had an outburst that very first night.

Five, Walmsley explains, "contributes its vibrations of versatility and resourcefulness, curiosity and intelligence, adaptability and motivation..." Sergeant Howie is certainly resourceful. Faced with people who will not answer him, he turns to ledgers for objective fact. He researches the details of the May Day festivities himself, and they turn out to be quite accurate. Walmsley's continues: "making positive life changes and learning through experience, major life changes and auspicious opportunities." We lose Howie a bit here, for his opportunities are decidedly not auspicious... unless martydom is somehow the goal of all devout Christians. Despite a sort of naiveté in the face of townspeople who are clearly not forthcoming with answers, though, Howie does learn from his experience. He makes the extra effort to search all the houses, to search the boat, when no one will provide him information leading to Rowan after he has determined that she is still alive.

Seven "resonates with the attributes of spiritual awakening, development and enlightenment, mysticism and psychic abilities, inner-wisdom and manifesting your desires, seeking knowledge, study, education and learning, understanding the self and others. Ellaine Macintyre, in her review of the film, notes a clear understanding we may get in regards to Howie and his religious conviction in his response to Willow's attempted seduction. She writes:

...the scene allows us to see another side of Howie: that beneath the religious fanatic lies a real man with powerful desires that he struggles to repress. Whilst we pity him for allowing himself to be so tortured, we also admire his strength of mind--this is no shallow puritanical hypocrite who caves in at the first whiff of temptation but a man with nerves of steel, incredible self-restraint and a faith that he will not relinquish easily.

Finally, Walmsley tells us that the whole number 457 "is a message that the changes in direction you have taken and the commitment you have made to bringing more spirituality into your life has fully aligned you with your Divine life path and soul purpose." Sergeant Howie's "Divine life path and soul purpose" is clearly to die a martyr... or at least to die as a sacrifice. The film tells us neither that the pagan beliefs of the Summerisle folk are correct nor that Howie's Christianity is correct. In the end, both beliefs are held, and Howie is merely outnumbered rather than beaten. If there is any particular message in the film regarding either set of beliefs, maybe it is Howie's shoulder number for 457 "indicates that you are on the right path... Follow your own lead and do not allow others to deter or sway you from your chosen path." As we are with Howie through almost every scene, we identify with him, our protagonist, so the tragedy then, is not that he has died--if the Summerisle folks' pagan beliefs happen to be correct, Howie's death might be justified--but that he has died and his beliefs may be the correct ones, or neither belief set is correct and his death is simply a meaningless tragedy that will not help the coming harvest (and maybe the people will demand Lord Summerisle as sacrifice next year). 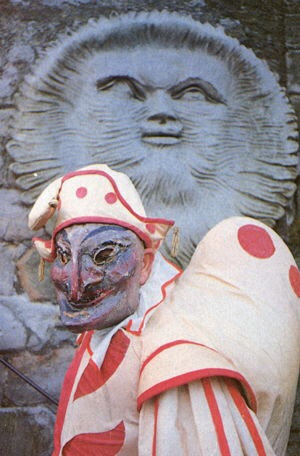 The film is nearly over. And, I've not even gotten to talk about Punch. I meant to compare Howie's investigation and need to find and then protect Rowan to Punch watching the baby.

Also, I meant to get into the idea of Howie being "king for a day"--he may not get to enjoy himself on Summerisle, but only because he is not the kind of guy who would. He could have given in to Willow's seduction. He could have had a bit more to drink at the inn and sang a few ribald tunes. He does dance in the procession; though this is, ostensibly, to fit in, the effect is the much the same.

And, lament that I have not the time to get into the awesome lyrics to "Gently Johnny" and its place in the film as a sort of mellow shivaree.

I also have not gotten--having mentioned the Tarot briefly above--to reference to the Hanged Man in this film. The Hanged Man hangs of his own free will, yet he is bound. Biddy Tarot tells us, this "is the card of ultimate surrender, of being suspended in time and of martyrdom and sacrifice to the greater good." Howie never hangs. Not literally. But his situation, in the end, is not that far off from the Hanged Man. Which brings us back to free will again. Howie does not go willingly to his death, but he does go willingly (albeit, having been so very much manipulated) into the situation that leads to his death. His beliefs, his determination, his conviction--this is his downfall