i kinda wanna get started

New thing: watch whatever movie I like, maybe just once maybe for days on end, and on the 2nd of every month (i.e. today), watch Groundhog Day again. (It's on now, even though I watched it last night. Phil forbid I'd watch it two days in a row.)

I did watch another movie today--Mission: Impossible - Rogue Nation--but I have very little to say about that movie. Basically, if you want to see it, you should enjoy it. It's got the usual Mission: Impossible tropes: spy action, heist action, way-too-realistic face masks, nifty gadgets, Tom Cruise doing his own stunts, a scene or two of Tom Cruise running really fast, a good long sequence of Tom Cruise on a motorcycle and complicated post-Cold War intrigue (with no real link to the whole Russia-US thing; that's just a simple way to describe the nefarious NGO spy organizations like the decommissioned IMF and the Syndicate going at it like Antonio Prohias is behind it all). The Guardian calls it "rigorously formulaic" and while I'm not sure they meant it as a compliment, that is a pretty good description for all five Mission: Impossible films, now, plus that 1988 television series, and of course the original made-during-the-Cold-War series.

(Doublechecking the year for the second TV version, I just learned that there was a crossover (of the original series) with Diagnosis: Murder, which I never watched regularly, so I missed it. I know they (Diagnosis: Murder) did crossovers with Matlock and Mannix and a maybe a few other shows so it wasn't just a hey-both-shows-have-a-colon-in-the-title exclusive.)

What is really in my head today is not reviewing the latest Mission: Impossible, which does what it does quite well; the aforementioned Guardian review says, "if you're in it for the action alone, you won't be shortchanged" and it definitely has a whole lot of action going on. But, what is in my head today is Groundhog Day. Two years of this blog down, an entire year of it devoted to this film, and I've discovered something new--the mystery I mentioned at the end of yesterday's entry. This image: 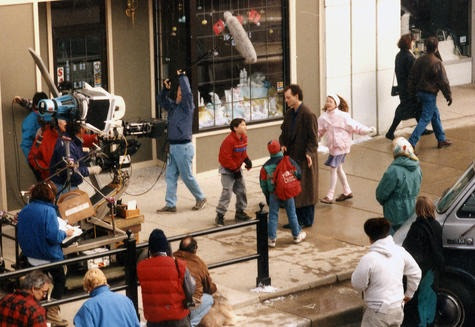 Aside from it being a scene that is not in the movie, and that I immediately recognized the kids I used to call Zacchaeus and Katie, it's also a scene that I didn't immediately remember from any of the three drafts of the screenplay that I've read... thinking on it for just a minute or so I recalled something with kids interrupting Phil counting cracks in the sidewalk. I didn't connect the two right away because the scene in the image above is clearly in the town square and I just assumed that when the screenplay (the scene is actually in the second and third revisions both) says he's walking through "town" it meant a residential area... not sure why I thought that. Anyway, within that minute--and before I checked to see that the scene was on page 75 of the second revision and page 80 of the third--I found something new on the great and powerful interwebs. I found the "final" revision. With revision dates on the cover running through production time, this is basically the shooting script. I'll get to the details in a moment (and I will try not to take three days).

First, though, that scene with the kids. First, for identification purposes, here are the three children in other scenes. First, the former Zacchaeus, now... Joey (I have decided he seems more like a Joey than a Mike) in the hospital with a cast on his leg: 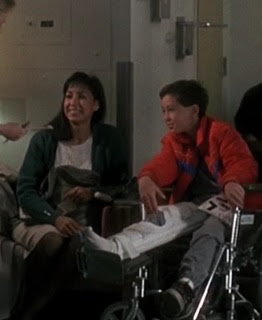 And, in Phil's arms after being saved from needing that cast:

Here's the former Katie, now Sue... which really seems wrong since the girl who actually lives in the house they used for the piano teacher's house is named Kate, who is nice enough and opportunistic enough to give (but donations are accepted) hot chocolate to the people on the walking tour in Woodstock during Groundhog Days every February. But, the script gave me Laraine's name--that's Phil's date in the French Maid costume--and Mrs. Lancaster's first name--Florence, and more, so I will allow for the possibility that her name is Sue. 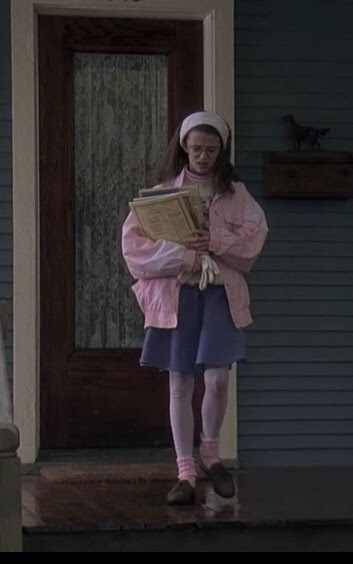 Now, Joey and Sue have important scenes in the film, but that third kid was a challenge. Or, it would have been if I hadn't obsessed once upon a time about whether or not Joey was the kid in the background in the Tip Top Cafe on god day--he's not. Anyway, the jacket didn't look right, but then I noticed the backpack. In that shot you can't read what it says too well, but then there's this: 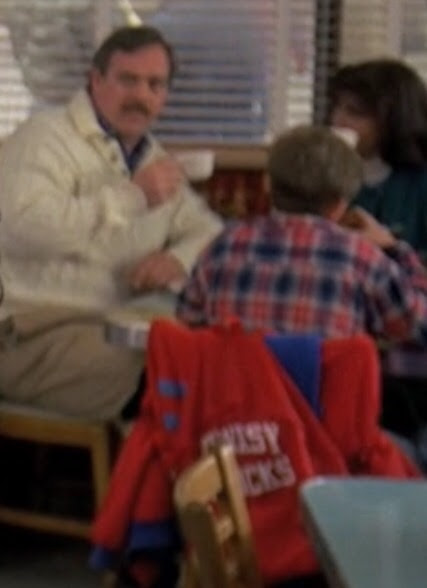 I hadn't noticed that was a backpack hanging over a coat before, though it was a coat with words on it. And, what does it say on the backpack? PUNXSY ROCKS. Now, that doesn't mean it's the same kid. The Tip Top kid has a red jacket and Mike has a mostly green jacket. Maybe it's not the same kid. But, until I can find more information on that kid, or that scene--and today I found some footage on YouTube of some scenes being shot--not that scene--so that's cool. Supposed to be putting Groundhog Day father behind me and it's rearing its beautiful head with gusto. Hell, I'm past my usual target of a thousand words already and I haven't even gotten to the new screenplay. In fact, I had a few more images regarding that scene above, just to solidify my place as the foremost expert on all things Groundhog Day. Namely, this: 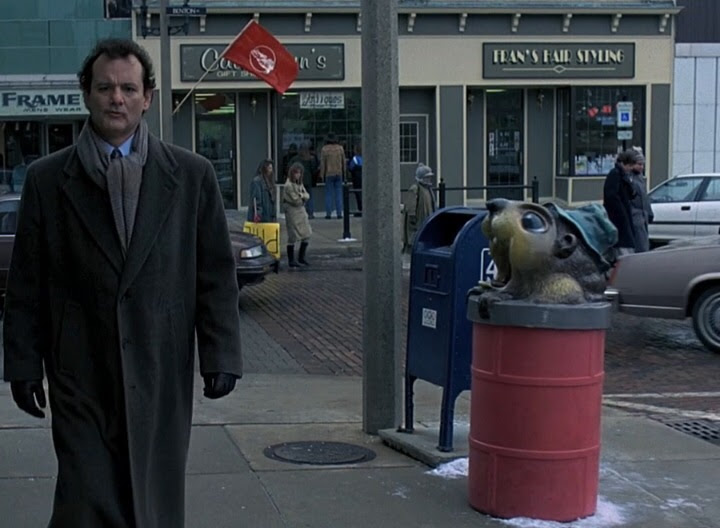 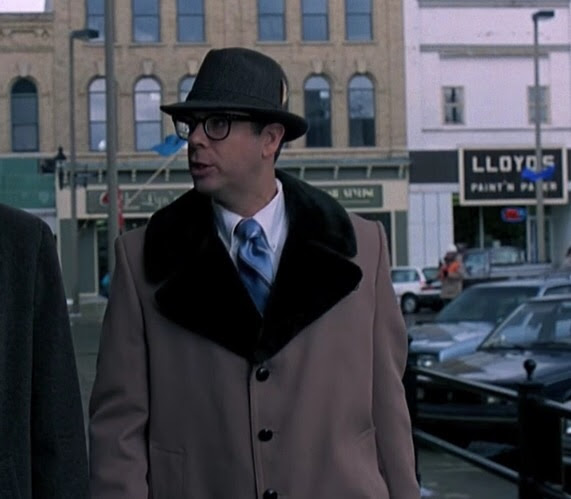 Together, you can see the shops that are in the background in that scene with Joey, Sue, and Mike--Fran's Hair Styling and the oddly apostrophed Lloyd's Print's Paper.

This puts the scene just across the street from where Phil meets Ned and O'Reilly (the Old Man), on Benton Street at the intersection of Benton and Cass... 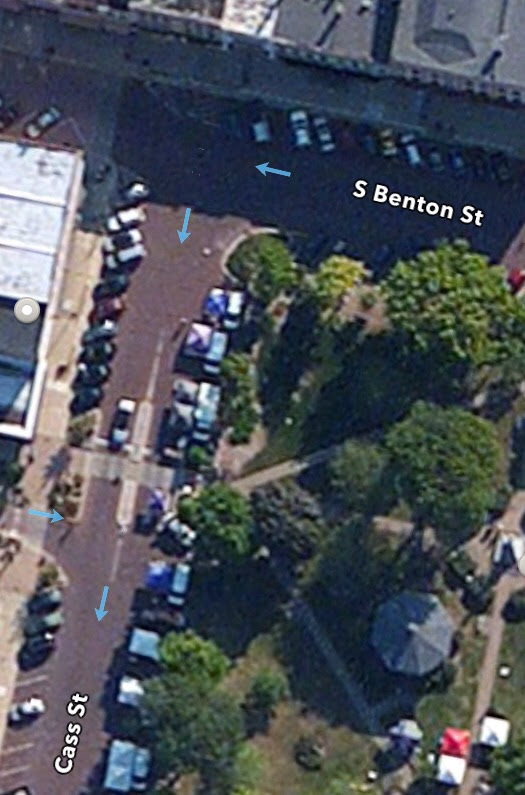 That map is angled, by the way, so north, the direction from which Phil approaches on Benton Street every morning, is to the left.

Anyway, I'll find some time to link to the YouTube videos I found sometime. And I'll get to the final revision of the screenplay sometime soon There it is with a bunch of tabs attached, ready to go. Supposed to be moving on to something like a different movie every day and I'm going to be watching Groundhog Day at least one more time soon (not tomorrow because--well, I'll explain tomorrow; I've got a planned screening of another movie for tomorrow. perhaps the next day).

Wouldn't it be funny if I just watched Groundhog Day every day all over again? And never stopped.