it's about the joy of living...

Roger Ebert called The Fisher King a "disorganized, rambling and eccentric movie that contains some moments of truth, some moments of humor, and many moments of digression." That sounds like he meant it as a bad thing. But, really, that's just life. Just because we like our movies to be more straightforward, more organized, less rambling, more focused, doesn't mean they have to be.

"The Fisher King" is so charming it's hard to say when we notice it has no clothes. Individual sequences are bittersweet and moving, some [only some?] of [Robin] William's inventions are funny, there is no denying the originality and force of the [Mercedes] Ruehl performance [which won her an Oscar]--and yet there comes a time when we cannot sustain one more manic outburst, one more flight of fancy, one more arbitrary twist of plot, one more revelation that the movie tricked us into caring about subjects it eventually throws away.

The manic outbursts, the flights of fancy--that's a Terry Gilliam film through and through. And, Gilliam's approach to film seems almost the same as Robin William's approach to comedy, that spark of madness bit from yesterday. The world is a dark, dangerous place where success comes to uncaring bastards like radio show host Jack (as opposed to Jack in the rest of the movie), preying on the insecurities of his listeners for the sake of entertainment. The world in a Terry Gilliam film is even darker by turn and more dangerous, but there is room for whimsy and light and madness. In fact, in The Fisher King, the only way Parry keeps on going is by imagining (which is misleading because it implies purpose) that he is a knight and there is a red knight between him and the successful quest for the holy grail. And, the only way Jack can keep going, really, is to jump right into Parry's fantasy and subscribe to that same madness. Parry's paper written when he was college professor Henry Sagan, was entitled

The Fisher King
A Mythic Journey for Modern Man

That might as well be the full title for this film as that's what this movie is--it is about getting out of the trappings of modern life to do something more meaningful, maybe. There's chivalrous romance, a holy quest, cloudbusting... well, maybe that last one isn't part of the medieval fantasy. But, Gilliam loves his mythic stories, finding sanity and sense in the midst of the insane and the nonsensical. In this and his other films, there's a clear sense that life is to be found with the insane, those who give in to whims, those who cry out on the street "I love this guy" rather than the "jaded, motherfucking city" folk.

We all operate under the guise of civilization and society and we go along to get along. We hold down jobs and do what we're told, do what the rules of civil society tell us to do. Go to school, go to college, get a career, get a heteronormative relationship with a spouse that will get you your two-and-a-half kids and maybe a dog. 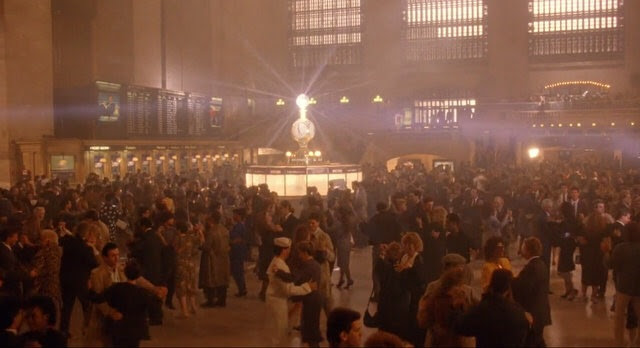 This Grand Central Station scene with the ballroom dancing right now is somewhere far from that everyday normative behaviour thing; it's like the romance and the whimsy of something you just won't get in the chaos of such a crowded place. Notice, though, that the dancing broke out at the train station where Parry was watching for Lydia, not the dirty, chaotic hospital where they took the Cabaret Singer (Michael Jeter). The dancing involves the everyday crowd, pulled into Parry's flight of fancy.

Does it matter? Of course it matters, because we are human and so is Parry and so is Jack and if we have bought into the story at all, bought into the characters at all, we care that they get their lives back together or, alternatively, find some comfortable place within the more insane side of the world. It doesn't matter if the cup is the grail or an idea. It matters that it to Parry it is important. He lost his wife, and lost his life effectively as a result. That he has fastened onto this fantasy is arbitrary in its specifics. It could have been any fantasy... Well, maybe not any fantasy. The knighthood aspect of it is essential to who Parry is a a person, his personality, the way he interacts with others. For example, when Jack gives him seventy-five dollars, he almost immediately gives it away to another homeless man because, what is he (Jack) going to do with seventy-five dollars. (Early in the film, DJ Jack tells his manager that giving fifty cents to a homeless man isn't going to make any difference. Arguably, that seventy-five dollars is not really going to change a homeless man's life, either. But, the guy that Parry gives it to--his fantasy, his madness, ties into the stock market. Maybe he used to be a stock broker, lost all his money, and now he's on the streets. Maybe that singular scene and that character is a comment on what capitalism can do. The money--the reality of the money--doesn't matter, but the effect it can have does. Similarly, the reality of the holy grail doesn't matter, but the effect it can have does.

Does it matter? Of course it matters; what a damaged character seeks always matters.

And, aside from all that, "a movie like this, which allows fantasy to be real"? Is that not every movie? It's all fantasy, it's all imaginary. Whether Phil Connors gets out of Punxsutawney, whether Neil Perry gets to act on stage, whether Kevin McCallister can defend his house against the Wet Bandits, whether Dan Evans can get Ben Wade to the train station, whether Luke Skywalker can destroy the Death Star, whether John Rambo can rescue the POWs, and so many other options--regardless of how realistic the plot may be, how down-to-earth the details and the characters, the situation is still just a cinematic fantasy, a flight of fancy of its director and its writer(s) and its players. And, if it works, a flight of fancy for the audience.

And, I had meant to write about the way the movie portrays love today.

In fact, Ebert complains that having two couples in the film is a "fail-safe redundancy" as if a film can only sustain one couple, one plot. But, this film is full of romance and these "redundancies" then.

(Also, as far as redundancies go, Jack is like the the Fisher King to Parry, and vice versa, but also in the end, the rich guy, Carmichael, stands in briefly as the Fisher King for Jack, needing only the smallest of acts to save his life.)

Redundancies. Parry and Lydia. Jack and Anne. Parry and his late wife. Parry and Jack. The cabaret singer and--I don't know--song, performance. It's all madness, and these are all echoes of the same "redundant" notion--that we might be happier with some purpose to put our lives to, and someone with which to share that purpose. It's only madness because everything else surrounding it is so fucking dull.