(I'm not done with Joe Clark.)

"...any school must deal with the student as they receive them, no more and no less" (Clere, 2015, April 1). An interesting line from an article at ethosreview.org, this past April, that is partly about Lean on Me and partly about recent North Carolina policy that grades schools based on standardized test scores (not a novel idea, certainly). And, I both agree and disagree with the sentiment.

On the one hand, yeah, a student comes to school with certain values and beliefs instilled in the home (or from the places outside the home where they spend time). A student is limited by his or her socioeconomic conditions. All students are not created equal. Case in point: Kaneesha (Karen Malina White) was a student at School 6 where Joe Clark (Morgan Freeman) was previously principal, she seems set up in the film as one of the good students. Yet, at the end of the movie, she's the one who has gotten pregnant. Children make stupid decisions. Children make mistakes. Joe Clark's solution (for every other student) is to throw them out.

On the other hand, there must be consequences for troublemakers, consequences for disruptive individuals. As Joe Clark says in the movie, this is a war for the other 2700 students; he throws out 300 to save 2700. If the one act guarantees the other, if ridding the school of those 300 troublemakers guarantees the success of the other 2700 (and, I mean on more than just some basic skills test), then really, fuck those 300 students, kick them out and forget them... except for a couple things: 1) you have a responsibility to those other 300 students as well and 2) you have guaranteed nothing; rather you have set a precedent that will only instill fear in the hearts of the 2700 remaining. 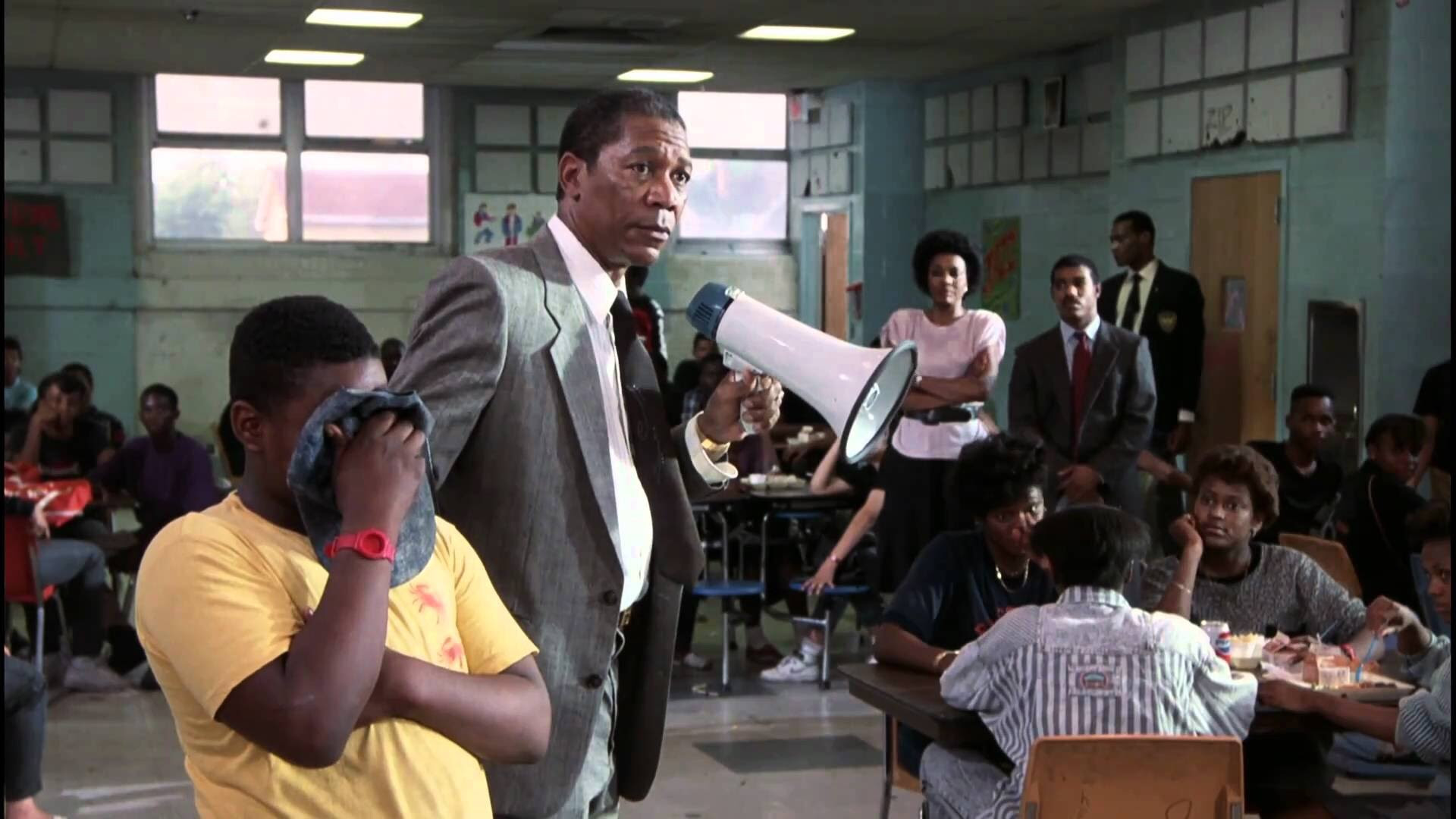 Clark just called out, in front of the full cafeteria, Thomas Sams (Jermaine "Huggy" Hopkins) for looking slovenly at school. He says,

I want all of you to take a good look at this slovenly, sloppy boy--as an example of how not to dress. If you look like this in the morning, find some other clothes to wear. Self-respect permeates every aspect of your existence. If you don't have respect for yourself, you're not gonna get it from anyone else.

He may be right about that last bit, but shaming the kid in front of the school? That's a bully tactic that will at best help Sams figure out how not to get noticed, not necessarily how to actually be better... Maybe the clothing thing is a bad example of that--plus Sams is dressed "better" when next we see him. But, a) his outfit in the cafeteria is not bad, except for a stain (which actually looks fresh, but that may be a costuming mistake). Like the multiple choice question problem yesterday, there's a presumption here of circumstance that simply might not exist. Sams might not have a choice what he wears. He might not have much else.

I gotta come back to a bit from Utopia (after a long bit about economics):

If you do not find a remedy for these evils, it is idle to boast of your severity in punishing theft. Your policy may have the appearance of justice, but it is really neither just nor expedient. If you allow people to be badly brought up and their habits to be corrupted little by little from childhood, and if you then punish them for crimes to which their early training has disposed them, what else is this, I ask, but first making them thieves and then punishing them for it? (More, p. 11)

"Performance gaps in education are directly correlated with gaps in socioeconomic status" (Clere, 2015).

But, the same tactics continue. The northjersey.com piece I referenced yesterday describes Eastside High School in 2009 (20 years after this film). The methods are little more high-tech than Clark's...

Administrators are responding and will start installing cameras inside Eastside Friday, said Superintendent Donnie W. Evans. Violence is rising at Eastside, with an "unusually large number of incidents, student on student," Evans said.

... In addition to the security cameras, which will monitor the nearly 25 exit doors, the school will increase police presence inside and outside the school. Long-term, Evans intends to open two new alternative schools for some of Eastside's most challenging students; a place where they can learn better social and behavioral skills.

"Until we can control them, we can't teach them," he said.

Until we can control them, we can't teach them.

As a parent, I know the temptation of control. It's easier sometimes to come down hard than really dig in and fix the problem. Ideally, you'd like every student to understand why things are the way they are. But, when you've got 3000 (or 2700 after you weed out the bad apples) students, you might be able to learn their names (and, real-life Joe Clark as well as his cinematic counterpart make a good practice of this) but you cannot make personal time for them all. And, even if you could, you cannot guarantee that they will all understand or agree with you. Just like the rest of the education process, you cannot simply pour information into the empty vessel of someone's mind and be understood, be liked.

The ending of this film, with the kids coming to the jailhouse (or whatever building that is) to protest Clark's arrest--that never happened.

(If it had, it would just reveal more hypocrisy on Clark's part--those protesting students are troublemakers standing up against the law; he should not be a supporter of that... except he has been consistent in only being against those who stand against him. He stood up to the administration at Eastside when he was an instructor there, but when he is the administrator, no one is supposed to stand up against him.)

Instead of one black teacher standing up to him, a group of them met in secret to get rid of him and Clark transferred them to other schools. Instead of a trap to arrest him over the chained doors, Clark stopped chaining them as soon as he was challenged on it.

Even Clark has his limits when it came to the law.