the path of least resistance

I'm watching a fairly obscure little movie in the theater today--The Young and Prodigious T.S. Spivet and there two moments stick out as things I want to get into here.

(First of all, the movie's directed by Jean-Pierre Jeunet--if you know who that is and are interested, you should know that it's an English language film (though filmed in Canada). It's about a 10-year-old-boy who heads out on the road (almost Into the Wild-style) to get from Montana to D.C. to accept an award for inventing a perpetual motion machine. There's a whole thing about guilt over the accidental death of his twin brother and an almost painfully obvious metaphor--perpetual motion for the way the family has settled into its post-tragedy life, and everything resolves itself a little too neatly. But, the visuals, including overlayed maps and diagrams (apparently the book on which the film is based includes a lot of these things) are great, a lot of train rides and countrysides (Canada posing for the United States). It's a simple enough story but done fairly well. This isn't City of Lost Children-level Jeunet but it's good.) 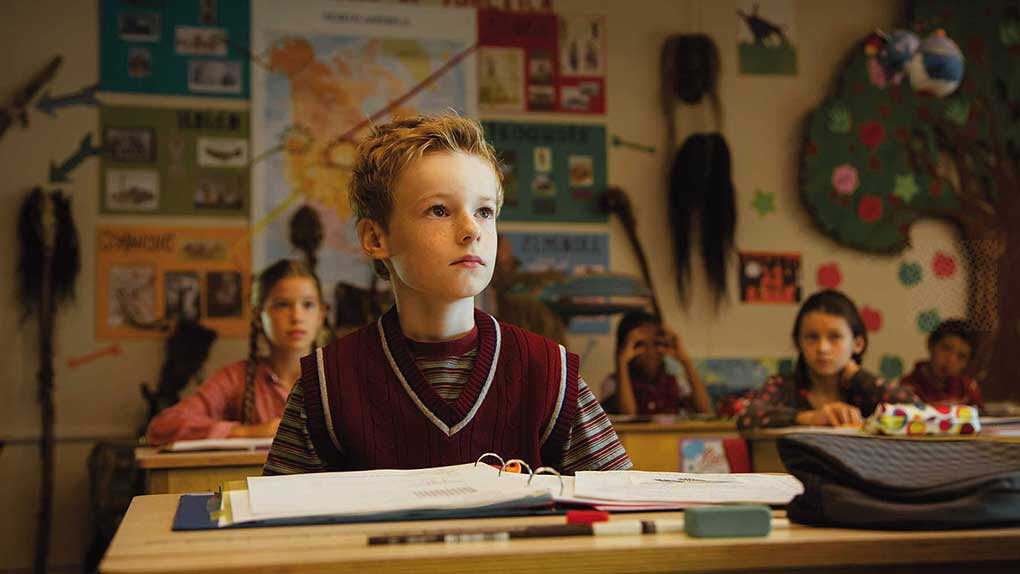 First thing: early in the film, T.S. is at school and he's clearly smarter than his teacher--the picture he drew of a goose in his paper that his teacher says is scientifically inaccurate has just been published in (I think) National Geographic, for example. T.S. is capable of great things; that's just the premise of the story, not a stretch. But his teacher shuts him down, tells him he's got a "superiority complex" and gives him a C on the paper (which not only includes that published drawing but also details of his perpetual motion device which, it turns out, is about to win him a distinguished award from the Smithsonian). Jeunet superimposes a second version of the scene over the end of the first, T.S. getting up out of his chair and standing up to his teacher, and I wonder what T.S. could do with a teacher like John Keating from Dead Poets Society. As another teacher--seemed to be a college professor but the film doesn't explain what T.S. is doing walking into a college class (maybe, in the book, it has to do with his entomologist mother having a link to that school or something--I don't know)--says (and as Simon Abrams over at rogerebert.com says, it's a theme of the film "badly expressed" or maybe just a little too on-the-nose expressed) "science starts where imagination ends."

(And, there are a lot of parentheticals and em dashes in this entry. I apologize if it's confusing, but I'm juggling The Young and Prodigious T.S. Spivet with an urge to return to Dead Poets Society while watching the first episodes of The Red Road on Netflix. I will try to be more clear.)

The thing is, here we have a kid who is not squandering his potential but rather is having his potential squashed by his teacher, someone who should be promoting his genius not belittling it. As I said in a reply to Mal's comment on yesterday's entry, I don't think the point is that someone like John Keating is there in the classroom in Dead Poets Society to tell those boys to think for themselves. The point is that everyone else--the headmaster Mr. Nolan, Neil's dad Mr. Perry, are telling them the opposite. I see school as something to advance students, not to confine them in the boxes of our sociocultural bullshit.

Speaking of bullshit, one of Kevin J.H. Dettmar's complaints over at The Atlantic about Dead Poets Society, Keating in particular, is that he gets Robert Frost's "The Road Not Taken" wrong. Keating, of course tells his students, "Robert Frost said, 'Two roads diverged in a wood and I, I took the one less traveled by, and that has made all the difference." Dettmar complains, "When we simply 'feel' a poem, carried away by the sound of the words, rather than actually reading it, we're rather likely to get it wrong."

After a year of looking at the same movie day after day, after the thousands of movie's I've seen in my life, I have my interpretations of things when it comes to this movie or that movie. But, even when I may argue otherwise--I must assume that happens--I don't figure that anyone else's view on a particular film is, you know, wrong. My thing with poetry--and, let us be clear that I am not, nor have I have I ever been an English major--is that you can't get it wrong. There are better interpretations, maybe. There are definitely worse ones. But, if I read the lines

I shall be telling this with a sigh
Somewhere ages and ages hence:
Two roads diverged in a wood, and I--
I took the one less traveled by,
And that has made all the difference

and I think this is a poem about how my choices matter, that is my prerogative. But, even more important here than the possibility that a poem can be interpreted in multiple ways, it is perfectly reasonable for a high school teacher like John Keating to offer up the popular interpretation to his students.

(And, it is the popular interpretation. Even if Business Insider can run a piece about how Frost was being ironic and the narrator of the poem is really saying his choice didn't matter. Hence the sigh. I'd say that sigh could just as easily be interpreted as the narrator thinking his choice was the wrong one. That Business Insider piece points out, by the way, "Frost may have deliberately misled his readers. Various quotes from Frost's correspondence suggest that he knew people would misunderstand the meaning--and their confusion even amused him." My take: if poetry wasn't allowed to be misinterpreted, it would be more clear. Which would make it less poetic. Which would make it less enjoyable.)

Whether it is wrong is, in fact, secondary to whether or not it makes sense in context of the scene. That is what matters to me--the scene. Plenty of movies get facts wrong, plenty of movies misrepresent history or reality, but that doesn't make them bad movies. Keating is trying to get these boys to trust him, to like him. He is trying to inspire them. He also quotes Robert Herrick's "To the Virgins to Make Much of Time"--

Gather ye rosebuds while ye may,
Old Time is still a-flying;
And this same flower that smiles today
To-morrow will be dying.

He might as well be quoting another Frost poem:

Nature's first green is gold,
Her hardest hue to hold.
Her early leaf's a flower
But only so an hour.
Then leaf subsides to leaf.
So Eden sank to grief,
So dawn goes down to day.
Nothing gold can stay.

This is a film about teenage boys (not unlike The Outsiders which features that poem) arguably for teenage boys (and girls). Dettmar was in his PhD program when he saw this movie. I was 13. Of course he shouldn't like it as much as I did even if his major wasn't English Literature. Keating is not speaking to English Lit majors. He is not even really speaking to adults. He is talking to young people who need to hear that their dreams might be worth pursuing.

It's not as if the film suggests that these boys should just do whatever they want and damn the consequences. In fact, Keating's line to Charlie--"Sucking the marrow out of life doesn't mean choking on the bone"--counters the out-of-control impulses that might be inspired by his teaching.

Plus, coming back to T.S. Spivet, when it comes to movies, when it comes to stories, we want young characters to pursue dreams to go out on the road, or into an "Indian Cave" or a high school party to dare to do something we don't have the guts to do anymore. If we ever did in the first place.

(The second thing about The Young and Prodigious T.S. Spivet, by the way, was a scene in which he stands at a fork in the road, but I already got into that.)