you treat them like animals, that's exactly how they'll behave

Naught but a few seconds into Lean on Me and I had to pause the movie and do some factchecking. I already knew there were some factual problems with this "true story"--and I'll get to some of those below--but right away, the opening text crawl quotes an "official report" that called Eastside High a "cauldron of violence." I was curious what kind of "official" report said this. According to a piece at northjersey.com, 22 October 2009, it was a county prosecutor in the 1970s who dubbed Eastside a "cauldron of violence." A prosecutor.

So the evidence here in the crawl that Eastside is bad--and trust me, the movie is going to offer up some more evidence as soon as the crawl gets done--is a man or woman... I tried to check who specifically said it and found a New York Times piece that says it was Joe Clark. I.E. the protagonist of this film. Not a prosecutor. So, 1) if it was a prosecutor, then it was a man or woman who was legally responsible for proving on a regular basis that crimes were taking place in the area; I imagine that quotation coming up as a bit of self-serving rhetoric in a press release or something; 2) if it was Clark--who says (in an Los Angeles Times piece, 3 March 1989) that "despite some of the movie's factual shortcomings, he believes it is '95% accurate'" when it portrays him--as I remember it, obviously, since I haven't even gotten past the opening crawl yet today--as an angry black man who just happens to find a place he can direct his anger and be lauded for it... if is was Clark, then it is a pointless detail to include in the opening crawl. Seriously, the protagonist who is about to go clean up the school thinks the school needs to be cleaned up. No shit.

And, you know a great way to oversell your success in fixing a place up. Make sure you get the blurb on the cover... of the movie version of your story.

By the way, another Los Angeles Times piece, 27 December 1987, backs up the prosecutor source.

I suppose I should let the movie play.

But, then factual inaccuracy #1 happens over the establishing shot of Eastside High. It tells us the story begins in 1967. According to the first Los Angeles Times piece above, Clark didn't get there until 1972. I suppose that saying it took "about twenty years" in the opening crawl sounds better than "fifteen" except a) the movie came out in March of 1989, so it was filmed in 1988, 21 years after its own starting point, and b) fewer years to fix up this "cauldron of violence" is a better story. It's actually a strange detail to get wrong.

"Welcome to the Jungle." Really? Nice transitions shot, though, from the clean Eastside to the graffitied version. White girl gets her shirt ripped off in the bathroom, drug deal is going on out in the open (with a teacher?)--the shorthand is almost too short. The now almost entirely black school has gone to hell. (Nevermind that in reality, Clark's class he was teaching when he was transferred out of Eastside was remedial reading and his students were mostly black already. Hell the school as a whole was 46% black.)

Fact problem, again. Clark throws out 300 students--"drug dealers and drug users"--during an assembly. In reality, in his first couple months, he did get rid of 135 juniors and seniors over poor attendance records or poor grades. By years, end, the total would be around 300, but officially, those were all over attendance or grades...

I've got a problem with just kicking out the drug dealers and drug users, as it's presented, really. Throwing out the troublemakers does might help those left behind... It might. But, what about those troublemakers? Where do they go? Kicked out of this "cauldron of violence" do they have anywhere else to go? Do they just end up on the streets, desperate for crappy jobs at best, turning to more crime at worst. What's the point in improving a school when its neighborhood is full of 300 freshly pissed off criminals? Clark warns the remaining students that if they do not pass the basic skills test they will be locked out of the American Dream. He just locked 300 students out of that dream.

This mother--Mrs. Barrett (Lynne Thigpen)--in the resulting "emergency meeting" has a point--

What happened this morning is an outrage. My boy is no criminal. He and those children belong in school, not out on the street. Our kids don't deserve this. Some of those children are smart. They're just discouraged about what chances they got out there, what kind of jobs they got waiting for them. Now, what kind of chance do they have?

He throws out the old adage about bad apples spoiling the bunch, as if an idiom justifies ruining lives. His preaching isn't getting anything done.

(But, damn, is this role a meaty one, and Morgan Freeman is killing it.)

Clark gets upset when the chorus teacher, Mrs. Elliott (Robin Bartlett) goes on with her chorus after saying she will instruct the students in the school song as Clark has demanded. At the start of the movie--but maybe he forgot about it since it was twenty years ago--he continued with his lesson about the word "imbrue" before going into the hallway to even listen to Dr. Napier (Robert Guillaume). Add hypocrisy to his bullying. Elliott's got a point about her job and he fires her. Mr. Darnell (Michael Beach) is next to fight back and he's suspended. 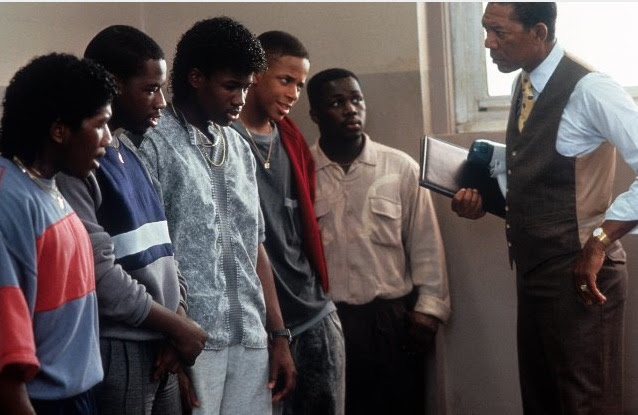 There's an interesting moment when the students are taking the practice basic skills test. One young woman is faced with the following question:

Each morning Bernard has his customary breakfast of oatmeal, toast, and juice.

She marks D for strange and Clark shakes his head. But how usual is a breakfast of "oatmeal, toast, and juice" for this inner-city, Paterson, New Jersey teen? She lives in the neighborhood of this school, as bad as it has been presented here (nevermind the reality); I'd guess she probably doesn't get breakfast at all, or if she does, it's something quick and cheap. I'm not particularly poor, I live in a good neighborhood, and I don't eat two different things (oatmeal and toast) for breakfast. It's practically un-American, unless you're at Denny's or IHOP or some other breakfast joint that you'd have a breakfast with more than one section to it. And, juice ain't cheap, or if it is, it's probably full of added sugars and not much use anyway. But, I don't have enough facts ready to prove the nutritional value (or not) of breakfast foods), so I will clarify the point I'm trying to make with this example--this "basic skills" test is not exactly universal. There's opportunity here--if this were an entirely fictional story, for Clark to notice this question and get mad at the system instead of these kids, to rage against the social, economic, and cultural biases in standardized tests rather than rage at students who don't necessarily need to know any better.

But, this is a true story. And, the system is too big, and really, Clark is a tool of the system. Fighting the teachers and their union, throwing out students as readily as the system will imprison them once they're out there on the streets, alienating people rather than working with them... Napier's yelling at Clark now for all of his "crazy" behavior. And, it's remarkable how much Clark would (presumably) side with that mother from Dangerous Minds; he tells Napier: "Mrs. Elliott's missionary zeal about Mozart's got nothing to do with our problems. Nothing. What good is Mozart going to do a bunch of children who can't go out and get a job?"

(First, another factual problem. Yes, Clark chained the doors shut, but as soon as he was told that wasn't allowed, he unlocked them. Here, he gets arrested for keeping them locked.)

(Separate issue: Clark tells Kid Ray (Alex Romaguera), who he has just learned is dropping out, that he'll be dead in a year out there in the real world. What about the 300 other students he put out there? 2700 students saved is worth 300 dead, I suppose.)

Now, how about an answer for Clark. What good is Mozart going to do? I don't know--how about links between music education and better academic performance. I'm not sure what the attitude on that was in the 1980s, though. Clark, I suppose, subscribes to a back-to-basics theory of education, the same idea that fueled the removal of music programs and other arts from publics schools in the 70s and 80s... and 90s and 00s... and still?

In his assembly speech earlier--the one during which he expelled 300 students--Clark offered this bon mot:

I wish this film were satire, proving the extremity of approaches like Clark's. But, it's not. It's couched quite comfortably in the "true story" of some test scores going up, because, of course, that's all that matters.