who has no interest in education

You ever get the feeling that everything in America is completely fucked up? - Hard Harry Hard-On 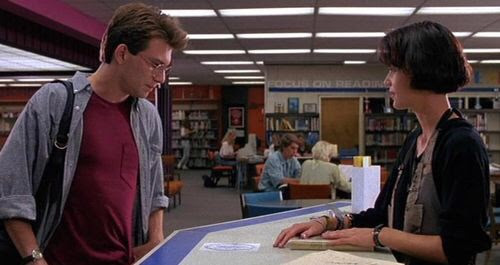 Pump Up the Volume is not about the stuff that's wrong with the whole country, or society as a whole. There are hints of bigger stuff (especially in Mark's final speech) but mostly, Hard Harry's broadcasts keep spiraling around Hubert H. Humphrey High School, where Principal Cresswood (Annie Ross) is following in Joe Clark's footsteps (a la Lean on Me), weeding out the bad students rather than making them (or at least helping them make themselves) better. (Plus Murdock (Andy Romano), the Vice Principal does his own locker searches without anyone around and eventually gets into a fight with a student.) Meanwhile, the lives of many of the teenagers at the school... welll, they suck. They live in Paradise Hills, Arizona, suburb of Phoenix. (And presumably the equivalent to Paradise Valley, that includes eight resorts; it's a tourist town.) And, they're living in America at the end of the millennium, so they're on their own. Or, as Hard Harry puts it:

I just arrived in this stupid suburb. I have no friends, no money, no car, no license. And even if I did have a license all I can do is drive out to some stupid mall. Maybe, if I'm lucky, play some fucking video games, smoke a joint and get stupid. You see, there's nothing to do anymore. Everything decent's been done. All the great themes have been used up. Turned into theme parks. So, I don't really find it cheerful to be living in totally exhausted decade where there is nothing to look forward to and no one to look up to.

As Malcolm (Andy Romano) talks to Hard Harry about killing himself, I've gotta turn to Laura Clawson at Daily Kos, who has a great line: "[Harry] becomes a voice for teenagers being abused by each other and, most of all, by their school." Hard Harry's problem there with Malcolm wasn't that he, as he laments later, didn't tell him "Don't do it." It's that he turned it into a conversation about himself. In trying to relate to Malcolm--not that there isn't a place for that--he said too much and let Malcolm say too little.

But, I wanted to bring this back to education. We should all know by now that teenagers' lives suck and they use and abuse one another just like the rest of us. Some are able to handle it long enough to survive it, some are not. Arguably, it's the school's job to make this process easier, better, more successful... something. There's a provocative exchange between Harry's/Mark's father (Scott Paulin)--remember, he's the District Commissioner--and Principal Cresswood late in the film:

Principal: You can't run a top school with troublemakers in the mix.

Commissioner: Okay, so what exactly is a troublemaker?

Principal: Someone who has no interest in education.

Commissioner: Oh, come on, that includes every teenager I know.

Principal: Can't you understand that nothing is more important than a good education?

Commissioner: Except the basic right to it.

Principal: The point is, I have the highest average SAT scores in the state.

Commissioner: Yeah, but how?

Pause for a moment as Chris (Matt McGrath) tells his story and an 80s movie (released 1990, but produced, written, etc. out of the 80s) is surprisingly understanding about homosexuality. It's teenage characters (and those of us in the audience as well), at least. The adults are a mixed bag--the school counselor calls the discussion pornography, one detective is understanding, another makes an offensive joke.

The problem is there, actually. It's not an aside. School is not built around the students and who they are, who they want to be. Instead, the twists and turns of their personalities, the bumps and scars that make them individuals are filed off, if not hidden, so they can fit into the school around them. The holes are round and the pegs are not just square but triangular, pentagonal, hexagonal... octagonal, or what have you. Take this metaphor further and think about it this way: if you make those round holes big enough, any shape peg will fit through them, will take the curriculum you put before them and take it in along with all the other material that fascinates them, remain the shapes they are, or change into brand new shapes, and your circles still remain. Just make room for more than some narrow definition of good student.

If we've got a public school system--and I think we should have such a thing--then it needs some core subjects, some central tenants to the education we decide is important. But, push too hard on either end--on the students or the administration--and it becomes something unwieldy.

It becomes something that keeps needing reform, keeps needing overhaul. And, it remains a varied beast, with too many goals. Tyack and Cuban (1995), in Tinkering toward Utopia: A Century of Public School Reform list the things we think and have thought school is supposed to do...

to socialize them to be obedient, yet to teach them to be critical thinkers;

to pass on the best academic knowledge that the past has to offer, yet also to teach marketable and practical skills;

to cultivate cooperation, yet to teach students to compete with one another in school and later in life;

to focuse on the academic "basics" yet to permit a wide range of choice of courses. (p. 43)

Is it any wonder that it has trouble being so many things to so many people?