you're not pretending anymore

The Heathers evolved into the "Plastics" and, I've only seen this movie one time. Cady (Lindsay Lohan) is like Roger Ebert (yesterday) going into a high school movie. Her inability to fit in and her lack of knowledge about how the school works means the movie starts on a reset. It can accept whatever high school movie tropes it wants to accept and reject whichever it wants to reject. It's a good position from which to deconstruct the genre.

(To be fair, since I've only see the movie once, I cannot recall just how much it is going to do this.) 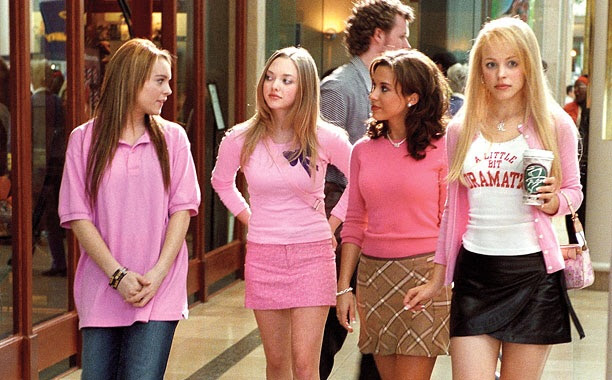 "Pretending that nothing was wrong turned out to be surprisingly easy." That's an interesting line given the subject of teenagers. All performance and face, rarely the reality. You are who you pretend to be in high school (especially, movie high school). Cady's problem, here, in fact, is that if she hangs out with the Plastics enough, she might actually understand them, even like them.

(Sidenote: the choreography in the "Jingle Bells Rock" bit is interesting--Cady is the only one who seems relaxed or comfortable doing it. The other three have been doing this routine every year. And, they've also been doing the routine of the Plastics. Who they are in front of everyone is just something they've put on. As a result, they are a bit too stiff, too practiced. Cady is just having a good time...

Or maybe Lindsay Lohan was just better at it than the other three actresses.)

...maybe that wasn't a parenthetical.

Like this: "I know it may look like I'd become a bitch. But, that's only because I was acting like a bitch." Cady is what she pretends to be.

(An aside: maybe I shouldn't have skipped Jawbreaker. I was going to watch that in between Heathers and Mean Girls but my daughter Saer wanted to watch Mean Girls with me (and Hayley wandered in to watch it as well) so I skipped ahead. Thing is, Cady's transition into "Queen Bee" is more an echo of Fern's transition in Jawbreaker than Veronica's in Heathers.)

And, let's leave it at that.