the bungled and the botched

(Options for today: 1. watch Dangerous Minds to continue the teacher film theme (and because I indicated (though without specificity) I would be watching another true story today) and because today is the 20th anniversary of its release. 2. watch Good Will Hunting which I was going to throw in whenever I finish with the teacher movies because today is was the one-year anniversary of Robin Williams' suicide.

So, I'm wary of the latter because it will be depressing, but I also don't want my themes to run too consistently or they might be expected; Phase Three of this blog is supposed to be mostly just winging it, whatever movie comes up comes up.

I decided to go with neither, but also the second cause.

I'm watching The Fisher King, a Robin Williams movie that is zany and fun, and horribly depressing on its own, without even talking about his death. I'm a glutton for punishment. Also, I've been wanting to talk about mental health at least on a personal, somewhat shallow level, if not a well-researched level. Truth be told, this morning I didn't realize it was the anniversary of Robin Williams' death or I would have planned a little more ahead. I've got a couple things bookmarked regarding The Fisher King because I had it on the list of movies I wanted to do for this blog last year, but I'm not sure if I'll even get to them...

Or maybe I'll start with one.)

Last August Jesse Hassenger wrote a piece for A.V. Club about this film and he makes deliberate comparison between Robin Williams and his character Parry:

Playing the unstable character--who cracks jokes while shouting at invisible floating people and who leads Jack [Jeff Bridges] into an alternate world of homelessness and mental illness beneath the surface of New York--allows Williams to indulge his manic side. But Parry isn't a man using his sense of humor to bring people together, as is the case with some of the other seriocomic roles Williams has occupied. His moments of free-association and whimsy are part of a coping mechanism, however fanciful. Williams draws on this sense of sadness beneath the grinning exterior to avoid stumbling into condescending magical-homeless territory.

Jack, indirectly responsible for a listener's murder spree only meets Parry because he is at his own low-point, drunk and talking to a Pinocchio doll, leading to almost committing suicide; he's about to kill himself when two young men show up with a bat and a gas can to beat down and burn up this guy they think is homeless.

And, in that moment, I suppose he is homeless.

But, zany. Jack's sleeve catches on fire, he flails for a bit, panicking, manages to put out the flame and falls over as if he's passing out. Parry and the other homeless men applaud. It's hilarious.

Then Parry takes Jack to his "domicile" which looks to be part sewer, part junkpile. And, I've got to quote Robin Williams before moving on. In a 1978 comedy bit in which he imagined himself in 40 years talking about being a comedian, he told the audience, "You're only given a little spark of madness. You mustn't lose it." As he talks to imaginary voices and tells Jack that he (Parry) is "a knight on a special quest" I imagine the chasm between jokes as fun and jokes as defense. I tell jokes when I'm by myself, sometimes. That depresses me. Not at the time, of course. I have a good laugh at the time. It's only later that it's depressing.

I've been depressed (diagnosably depressed, I mean, not just situational sadness) a few times in my life... or I've been depressed for many years of my life and I've just learned off and on to deal with it in such a way that it didn't impact the day-to-day so much. A few people close to me have issues with anxiety and depression. Maybe more than a few. So many people who are depressed or who have an anxiety disorder figure out just how to present themselves as something close to normal most of the time so that...

There's no peace. Not really.

Just illusions and facades put up to present to the world so that maybe, if the illusion or facade lasts long enough, we might fall for it, too, for a little while. Might believe that everything is okay. 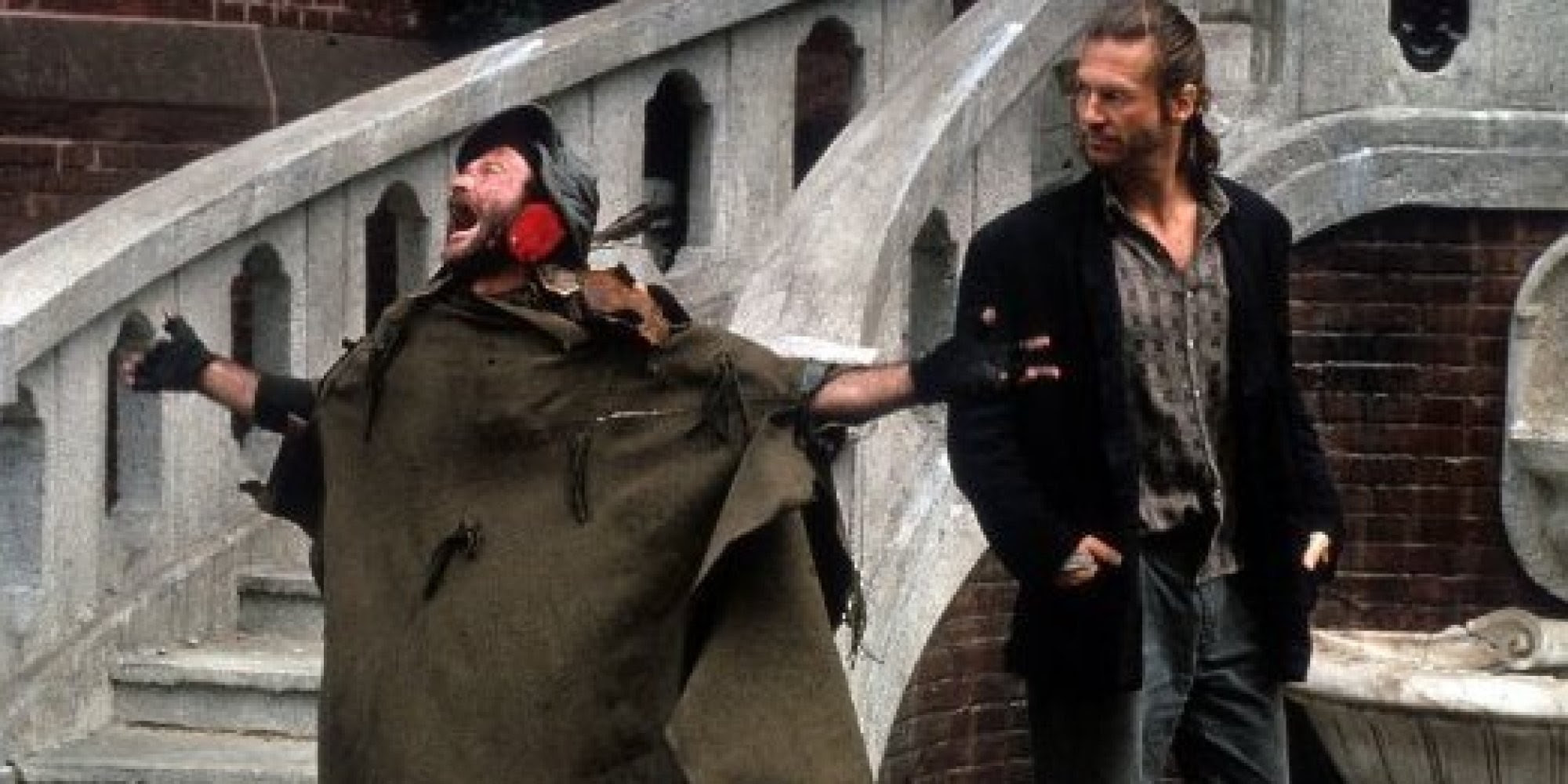 I'm pretty good at the day-to-day. As long as I've got things to do, and as a father, an ex-husband, a teacher, a coach, there is always something to do. When there isn't, I've got games to play (though I've got a few co-op games specifically so I can play when no one else is available or willing), movies to watch, blog entries to write, (lately) thesis work to do. This outlet--and this is basically a primary argument in my thesis, or will be--provides me a place to get thoughts out of my head, get words out of my head, and free up some space for, on a good day... normal? Or something like it. Some simulacrum or approximation of normal. I've been listening to the soundtrack to Next to Normal lately, and there are lines in it that ring far too true sometimes. I've also been listening lately to some heavy metal music, which isn't usually my thing, though I've sampled the genre now and then. The energy wakes me up, gets me working on the stuff I need to work on to get by, even though I'm way behind the schedule I set for myself at the beginning of the summer when it comes to my thesis.

(To be fair, I know me, and I know that I have no trouble when it comes to the writing part of it, so I set the schedule so that I would have too much time. I knew that last summer I got obsessive over tabletop games and figured I'd do that again this summer, then I invite people over to play games and either hardly anyone or no one at all shows up, and I figure that makes sense; why would people want to spend time with me?

This is the stuff that goes through my head sometimes. Damn the illusions, damn the facades, I'm not worth anyone's time when I'm just me.

I don't always believe it.

I supposed that's a positive.)

The thing is, I think I'm putting too much pressure on the start of the thesis. I could just skip to chapter two and write the majority of the thing without much effort, the literature review, the methodology, the justification for what I'm doing... but aye, there's the rub. The justification twists back into the introduction and I want the introduction to matter even though this thing will probably only ever be read by a dozen or two individuals. If that many. It's like this blog. In the thesis, I will have a section about diaries and journals because often this blog works more like that. I mean, I'm not commenting on the impromptu ballroom dancing at the train station in the movie right now (but I am thinking about watching this movie again tomorrow to write about something else). I'm rambling about my mental health and my inability to make as much headway as I wish I would have made by now in my thesis. I'll get it done. I know that. I always get the writing done that I need to get done. Every paper that I have written for college since returning to school as a nontraditional student got a great grade. Writing--I can do. But, great writing, the writing I want--it escapes me when I sit down to write it...

Which isn't even the point that matters here.

That's the point here. For me it's a chai tea latte with a couple add shots of espresso on the mornings when the energy just isn't there. And I'll put on a musical or some metal in my earbuds as I walk to Starbucks to caffeinate and force the day to get started.

That hole in my soul, or whatever you want to call it--fill it up with movies and dreams and too much to do, and life goes on like normal.

It only hurts when I breathe

It only hurts when I try

It only hurts when I think

It only hurts when I cry

It only hurts when I work

It only hurts when I play

It only hurts when I movie

It only hurts when I say
It's just another day

Which is both utter bullshit and fairly on-the-nose. (Lyrics from "Just Another Day" from Next to Normal, by the way.)

And, I wanted to write about Robin Williams. Brilliant man, brilliant actor, available to entertain all of us because of his pain. His madness. He deserves more words than I have for him.

Maybe I just don't have the words. When Harold Ramis died, I spent three days (207, 208, 209) dealing with his death, and his life, in this blog. But, at that point, I'd been spending time with Groundhog Day every day for more than six months. I'd been living and breathing Harold Ramis, so to speak. I haven't spent so much time with Robin Williams. I mean, Dead Poets Society last week, Good Will Hunting on the horizon, and so many other films worth watching that include his particular brand of... I'd say "insanity" but I don't mean it flippantly, and I don't want it to seem insensitive. I will just stick with his word--madness.

He had much more than just a spark.

But, he knew how to use it, how to abuse it and throw it up on the big screen (and the small screen) and the stage for all to see it, for all to enjoy it.

We all benefited. We were the lucky ones.

And, I love this movie. Parry just had his romantic (bordering on scary) rant about how's in love with Lydia (Amanda Plummer) and I'm bewitched like all those times that Phil's speech to Rita as she slept in Groundhog Day worked so perfectly for me, like the first time I saw Eternal Sunshine of the Spotless Mind or Hedwig and the Angry Inch or The Fountain and in that moment there is nothing else, no day-to-day, no depression. Just right here, right now, and the performances, and the writing, and the directing, sell a reality that, at least temporarily is better than my own.