if you're going to rule the school

That is Crackle's description for Jawbreaker. If you don't know the movie, imagine if the spiritual successor to Heathers had seen The Craft a few too many times but didn't like witchcraft, and just couldn't be bothered to be audience friendly enough to make Mean Girls.

The Heathers, the Plastics, the Debbies (bonus points if you get that reference)--here, the Flawless Four. We begin with a little voiceover--gotta have some voiceover because the audience needs things spelled out--then it's the morning of the birthday of the nice one of the Flawless Four--Liz (Charlotte Roldan). The other three, disguised with masks and hoodies staged a kidnapping to surprise her. The titular piece of candy in her mouth and some duct tape over it and when they go to open the trunk of the car (oh, they also tied her up and stashed her in the trunk), turns out she;s dead. This is the setup. None of the humor of Heathers--so far--and way darker than Mean Girls even tries to be.

Interesting juxtaposition under the opening credits, photos of the Flawless Four as they grow up next to footage of jawbreakers being made in a factory. The jawbreakers are basically the same on the inside, but a splash of color on the outside makes each one unique. The thing is, is this movie going to uphold the idea that these girls are all the same on the outside or the inside? Mean Girls suggests a sameness to all the teenage girls. The surviving three, having decided to hide Liz's death for now, have themselves a synchronized makeup application bit going on, except Courtney (Rose McGowan) is clearly more of a sociopath than the other two. She doesn't want her day ruined because she was nice enough to plan a surprise for her friend.

Essentially, you could see these three films--Heathers, Jawbreaker and Mean Girls as three versions of similar stories. Heathers is the 80s version; sure it's got some violence and murder, but it's all over-the-top and satirical. The darkness and death is all for fun. Like so many movies (in numerous genres) in the mid-80s; the tail-end of the Cold War had us stuck on violence. Mean Girls is the 00s version, a bit more fun, and jettisoning the darkness for some good PG-13 fun. (The other two are rated R.) But, Jawbreaker is the dark 90s version, a bit more existential. The Cold War is over, the internet hasn't really arrived yet, and we just don't know who we're going to be just yet.

Meanwhile, Fern (Judy Greer) is the mousy Carrie-type. Not one of the Flawless Four. And she finds Courtney and Marcie (Julie Benz) and Julie (Rebecca Gayheart) staging Liz's bedroom to look like Liz was raped and murdered (Courtney's idea, of course). Yeah, that's how dark they take it. Courtney makes Fern an offer--don't tell anyone and they will turn her into Liz's replacement (and Fern becomes Vylette). It's more a deal with the devil than Cady's infiltration into the Plastics... and really, Veronica's trajectory in Heathers is the (sort of) opposite, with her position between the Heathers and J.D. as rock and a hard place, the devils she knows and the devil she doesn't.

Marcie goes along with Courtney's plans, but Julie feels guilty (and sad) and separates from the group. To make things more complicated, Julie was friendly to Fern before Fern was popular. 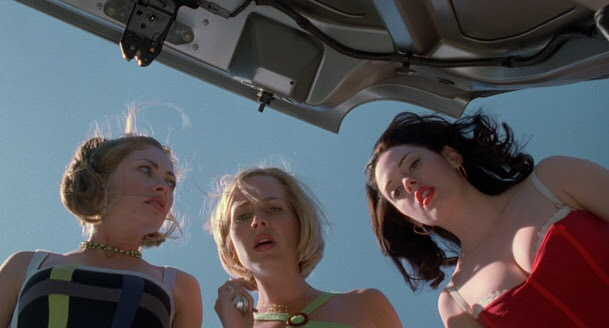 "This is High School," Fern/Vylette tells Detective Cruz (Pam Grier), "what is a friend, anyway?" She couldn't claim Liz as a friend, but she (Fern) clearly had a thing for Liz, connecting the dots on the skin on the back of Liz's neck during class. It's a nice obsessive detail. Thing is, as much as she thought, as she told Ms. Sherwood (Carol Kane), Liz was the "cat's meow" she never really knew the girl. As easily as Fern transforms into Vylette and as psycho as Courtney clearly is, maybe none of these girls knew any of the rest. At least, not since adolescence.

Like Heathers the "drama" here needn't actually involve anyone dying. Teenage drama is all life-or-death all the time. Making or breaking the new popular girl can be literal or not--same basic idea.

Footnote: I just glanced at the box office for the weekend Jawbreaker came out--not sure why I did that, the movie failed at the box office--and was surprised how many movies on the list I'd seen. Then again, February is Oscar season, so a lot of movies are lingering, and some throwaway (i.e. not award hopefuls) movies are just coming out. Two new movies in the top ten--October Sky and Office Space> --saw those that weekend, too. But, another interesting thing was that She's All That and Varsity Blues, and The Faculty, three very different high school movies, were also in theaters at the time.)

(Footnote #2: The prom is far too easy a setting for the climax of a high school movie. But, it's also probably far too easy a climax for the teenager's year in reality, too.)