a chance to think things over

All the conspiracy stuff people see in The Shining (like this stuff) aside, Kubrick is clearly playing with cinematic structure and staging. The opening credits running up the screen, for example. The impossible sets for another. The deliberate dismissal of the tension of Jack coming upon Wendy reading his book, for a third.

In fact, there's so much out there about this movie, I'm not sure what I can add to it. (Clearly, I can play with it, though.) Not to the movie anyway, not even really to the conspiracies or theories about theme. In a Mother Jones piece by Maggie Caldwell--"The 6 Weirdest Theories about "The Shining"--one of the theories referenced (but not specifically cited from any particular source) is that The Shining is "Kubrick's meditation on the weight of all of of history on the present moment." And, that's got me thinking not about what theories are true or not about The Shining but more a question of why we find so many theories about a single film at all.

And, yeah, I get the irony, this question coming from the guy who watched Groundhog Day for 365 days in a row, writing about it from close to that many different angles. 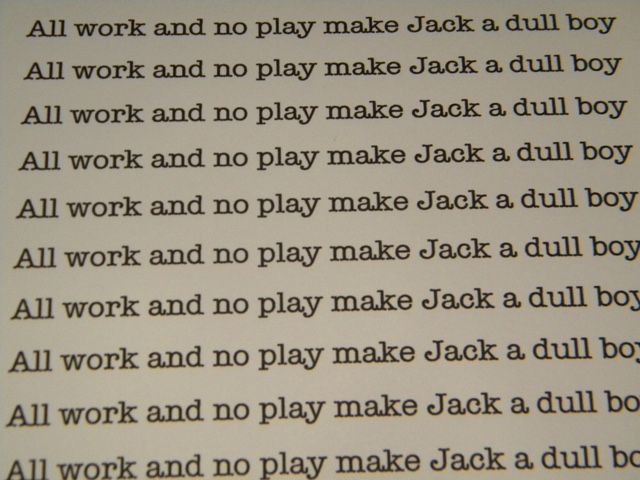 Thinking about movies and books and every form of art, really--why must we insist on more meaning than is obvious? I mean, can we not have a film about a family alone in a hotel together in the winter and not have deeper themes hidden inside it? Like does Poltergeist really have to be feminist? Can't any of the cinematic Christ-Figures I've explored in this blog--George Monroe, Buzz Lightyear, Hedwig Robinson, Racer X, John Rambo, John McClane, Martin Riggs, Old Man Marley, Malcolm Crowe (or Cole Sear), William Cage, Frank Cross, Clark Kent, Phil Connors--just be regular people who might happen to make sacrifices for other people? Does Groundhog Day have to be about becoming a better person, or can it just be a comedy about a guy who gets stuck in a time loop? Can The Shining be something far simpler than an indictment of America's destruction of Native Americans or the Holocaust or Stanley Kubrick's admission that he faked the moon landing or what have you? Can't a Calumet Baking Power can just be a Calumet Baking Powder can, just like Hemingway's fish can just be a fish?

Or are we dying to have things mean something greater just as we do outside that dark of the movie theater? Because we can't help it. Our brains have gotten too complex for the world around us? We expect everything to mean something, to indicate something special about the world around us, about society, about life. We watch a movie and expect its characters to not be singular and unique to that movie but to be symbolic of everyone like them. Tyler Durden/The Narrator of Fight Club represents all modern men (in the West) who are not as "manly" as men used to be. Diane Freeling represents every mother, protective over her children. Phil Connors represents every one of us who needs to get past our ego and make something better of our selves.

Or they are just individuals and we... need? them to be something greater because we can't be.

I was talking with some fellow grad students today about my thesis, about the idea of blogging to make sense of the world, and I figure that the process I put into this blog is just a more formalized version of what I (and so many of us) do whenever I see a movie--I try to look deeper because, like Fox Mulder's poster--I WANT TO BELIEVE. Or something. Maybe we just assume that filmmakers and writers put symbolic shit into their work out of pretense or expectation, so we look for it. Not that we want it but we expect it. But, at a certain point, after dozens or hundreds or thousands of movies, maybe what we want and what we expect blur right into one another and everything is commentary on the world around us.

Author's note: I happen to be wearing a Jack Torrance t-shirt today, chosen by chance early this morning because it happened to be atop other shirts in my drawer. Maybe there's a conspiracy there.