No recap as we get into Hellraiser III: Hell on Earth. The plot just gets going. A note as it starts, though: I was surprised to see talk of this film in Shadows in Eden; I hadn't thought that Clive Barker really had anything to do with this film. I have always thought of the first two as a British... thing, and this one the first... American entry in the series.

We're introduced first to JP Monroe (Kevin Burnhardt), who buys a redesigned... the movies never call it this, but apparently, it's called the pillar of souls. That thing with all the faces on it seen at the very end of Hellbound. Anyway, JP buys it for a small bit of cash from an updated version of the creepy homeless guy--who actually isn't all that creepy. Kind of has a Kris Kristofferson vibe.

Then, our lead--Joey Summers (Terry Farrell)--a reporter stuck with a hospital with nothing happening. Boring night, cameraman Doc (Ken Carpenter) leaves to cover a better story and then the Hellraiser bit arrives, a man with chains and hooks. Along with him--Terri (Paula Marshall), who points Joey to a club called The Boiler Room. Oh, and the guy's head explodes. The movie has more... energy than the previous two installments--not that energy was needed.

Vision/dream and Joey sees Vietnam-era soldiers fighting. Her father, left behind. She tells Terri all about it after. 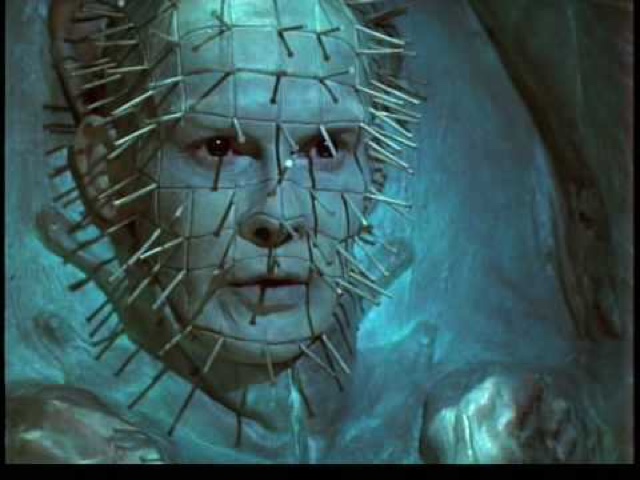 Pinhead (Doug Bradley) is trapped in that pillar--or so we can assume; these films really do not bother explaining much. Twenty minutes in, he gets some blood when a rat bites JP's hand.

More blood from Sandy (Aimee Lee), who JP picks up in the club. And, it is good that pillar Pinhead needed blood and not her acting skill to get things going.

But, nevermind her bad acting. Pinhead is not being very nice here. I mean, considering he ended the previous film by remembering his humanity, why is he so quick to take a life here? Especially, when Sandy solved no puzzle box. He is a stand in for, as he puts it, "appetite sated." Yet, even as he is preaching about how there is no good or evil, "only flesh," he seems more like a demon from a proper religion. He knows that JP killed his own parents, and he tempts JP to do more. (And bonus: JP is wearing a crucifix necklace.)

In the tape of Kirsty that Joey watches, Kirsty refers to the Cenobites simply as "demons." She has gone from knowing too much to knowing little that's useful. Her cameo is kind of pointless. More fan-service than plot-service.

And, now I remember what's going on. It's been a while since I've watched this movie. Elliott Spencer is calling out to Joey (showing up on the screen during Kirsty's tape, and then again later after invading her dreams). The Pinhead in the pillar is like the piece that was yanked out by Leviathan/Channard, the evil part, the force of nature part. There's no humanity there.

Which is interesting, yes. However, it doesn't make sense that it was the bad part trapped in the pillar. Why trap the bad part? It was the humanity part that was in Channard's way

But, the story we're given--the monster that was inside Elliott Spencer is loosed into the world. This movie deals in dreams, in psychological metaphor, and there is room for some serious deconstruction--seriously, Pinhead as a demon's id... except then it jumps into plot-only mode once Pinhead shows up in the club and starts killing people, i.e. the one hour mark. Time for act three. New Cenobites, and they've got one-liners (at least, Doc does).