an experience beyond the limits

Clive Barker talks with Lisa Tuttle in 1991* about creating good gods and bad gods in fiction and he says,

I think that is so much more interesting than the division into the white hats and the blacks, between human and non-human, where anything that is defined as "non-human," whether it be slug, shark, crab, Woman, is presented as this terrible threat. It's grotesque, and funny, and simple, and what bothers me is its simplicity. I mind it not because it's grotesque, but because it's simple-minded, and that's boring. You know what I mean? If you turn all of nature into something to be repulsed by, you ignore the fact that whatever is read one way as grotesque or frightening can also be read another way, as something beautiful, as a celebration of variegation and paradox.

* original source unknown, but it's reproduced in Clive Barker's Shadows in Eden.

And that celebration of variegation and paradox goes back to fantasy, goes back to those imagined worlds. Goes back to that place where our sexuality becomes somehow fluid... the baby an image of the polymorphous perverse... goes back to an image of our bodies as things whose moment-to-moment rebellion we understand and celebrate rather than live in fear of. This excites me all the time. I want to find new ways of saying it. This fiction is all about desiring other experience. It's all about wanting more than what our bodies apparently limit us to. At this point, fantasy and horror fiction completely overlap."

And they overlap with romance. You know, the story where one character imagines an impossibly happy life with someone he or she just met, and suddenly that relationship is the be all, end all of life, nothing else matters. This is fantasy. This is horror. This is romance. This is film. It's a grown up version (most of the time) of childhood pretend. Barker says,

I wonder how much all this comes down to the sense we have as children, the sense that we lose, of infinite possibilities... As we grow up, these seem to become limited and limited and limited... and when we enter the world of fantasy--and I'm talking now about horror fiction and invented world fiction and science fiction too--are we maybe attempting a return...?

I'm reminded of Rob Fleming's query in High Fidelity about which came first, his depression or his listening to pop music? And, I wonder, do we believe in romance because we grow up with stories about it, or are there stories about it because romance is real? And really, if we do believe in romance, why do we put so many obstacles in front of it in those stories, in romantic comedy films, in romantic dramas, in, well, any story that includes romance. Including Hellraiser. Good drama needs obstacles. Whether it's dead lovers in need of blood, or husbands who cannot satisfy. Or incompatible lifestyles. Or just being two different genders (since most romance, especially on screen, is still heterosexual) or, for that matter, two different individuals. The idea that two people can get together and spend the rest of their lives side by side is, frankly, insane when you get right down to it. We're all so damned different, with different interests, different tastes (in art, in books, in movies, in music, in food), different goals, different... sleep schedules, different appetites, different everything.

Seriously, if you think of al the variables, puzzle boxes to other dimensions seem just as likely as a lifetime of happiness with another human being. Superheroes who can fly or turn invisible--these make more sense than romance, than love. As if some cosmically powerful force could twist us together in order to make us happy.

Obsession makes more sense. Obsession, I get. (Oh, in my romantic moments, I get love, too. But, let us step past that for now.) Frank did not buy that puzzle box in search of love or romance. He wanted pleasure, pure and simple... well, maybe not simple. He spent several hours on Lemarchand's box before he happened to find by "chance juxtaposition of thumbs, middle and last fingers... an almost imperceptible click." Julia brings three men into the house just to kill them so that Frank can be alive again--that is the power that sex with Frank has over her. It's not love. It's not romance. Not, strictly speaking, those immeasurable concepts that stories love.

I do have an urge to perversity that perhaps is a little more thoroughgoing than that of some of my fellow writers; I mean, if I sniff predictability in what I'm doing, it immediately turns me off and I put down the pen. That makes the stories a little outrageous for some tastes, but it does mean that readers come to the stories knowing they're going to get something that is not quite like anything else.

Like Phil Connors claiming there's a network interested in him when he's really trapped in a job he think's he's too good for. Like Frank Cotton, for whom "normal" pleasures just weren't enough anymore. Like any of us who want out of deadend jobs, or loveless relationships. Life, love, horror, fantasy, dreams, sex, obsession, pain and pleasure--there really isn't much variety to any of it. We want.

In a way, we're all acolytes of the Order of the Gash. Whether we're looking for sex or a new cellphone, pain or some new TV show to bingewatch--we want.

And, when it comes down to that, all stories are the same. And every one of them is true. The details may be made up, may differ from story to story, but the heart and soul of every story and every character is the same. 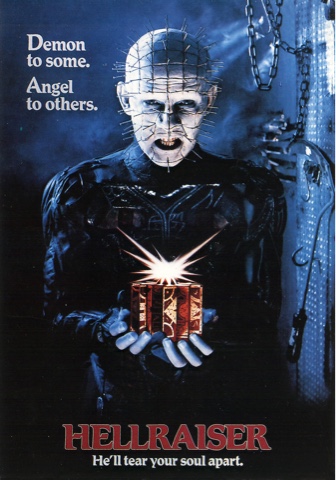