They could save each other, the way the poets promised lovers should. He was mystery, he was darkness, he was all she had dreamed of. And if she would only free him he would service her--oh yes--until her pleasure reached that threshold that, like all thresholds, was a place where the strong grew stronger, and the weak perished. - Clive Barker, The Hellbound Heart

So, I wanted to watch all the Hellraiser films this month. However, the rule about sequels that I cited a few days ago is especially proven true by the Hellraiser series. But, I'm a glutton for punishment--and these films are all about punishment--so I was going to slog through it...

Then, I came up with a clever notion--watch them in reverse order so they actually get better as I go.

Except for the obvious catch--I would have to start with the worst of the lot, Hellraiser: Revelations, the ninth in the series, made so cheaply and so quickly (to hold onto film rights) that they couldn't even get Doug Bradley (Pinhead) to take part.

So, anyway, I'm watching Hellraiser. The first one. And, we'll see how far I can get into the series.

(I'm figuring on making it at least through Bloodline. That's the fourth one, for those of you who have never bothered.)

The premise to the original Hellraiser (and The Hellbound Heart, the basis for the film) is rather simple--

That sex scene between Frank (Sean Chapman) and Julia (Clare Higgins) crosscut with Larry (Andrew Robinson) moving the mattress, with the climax coming not in the bedroom but in Larry's hand hitting the nail and bleeding (followed immediately by a shot of Frank's and Julia's postcoital bliss) is a nice bit of editing. And, it encapsulates a good portion of the overall themes, linking pain and pleasure, bleeding and orgasm...

--Frank sought hedonistic pleasure and, well, found it in its most extreme. Got torn apart in the process, but then his brother's blood (from that nail scene) brings him back--

--and then Julia, who is married to Larry but once had an affair with Frank, seduces other men to kill in order to feed Frank's restoration. Like the ghosts in a ghost story, the Cenobites, with all their leather and open wounds and chains and hooks are really just a metaphor for unbridled sexuality--what Julia wants but cannot get from her husband, what Frank... Actually, the movie doesn't offer much motivation for Frank. The need for pleasure is treated matter-of-factly. It just is. The novella opens with Frank opening Lemarchand's box. The film offers up a brief setup before that, Frank buying the box in a shady deal in some foreign locale. There's an implication of the romanticization of the foreign but then the movie moves on. It moves quite briskly throughout, actually.

Early in the film, scenes with Kirsty (Ashley Laurence), who will become the protagonist here and going into the second film, barely connect, but everything is cut together like a soap opera, no one scene lasting too long. Kirsty adds an interesting element, though--especially as Frank, having acquired a bit more flesh just now, said to Julia, "Come to daddy." See, in the novella, Kirsty is just a friend of Rory's (Rory being Larry's name in the novella). And, if I remember correctly, she has feelings for Rory. But movie Kirsty is Larry's daughter (an independent adult but still young) from his previous marriage, a leftover perhaps of a relationship where he was more passionate. When Frank makes advances at Kirsty later, while wearing Larry's face, there are multiple levels of inappropriateness to it.

But, back to the metaphor. When Julia has sex with Larry, Frank comes into the room, ostensibly to murder Larry, but Julia says "no" and Frank might as well just be a memory, or the lust that keeps her from really being with Larry. Larry takes her "no" as directed at him (and it sort of is) and they cannot finish.

There is a (potentially) anti-women sentiment at play here. Julia brings these men into a dirty room and destroys them. A feminine void. And, for what? A fantasy of some better man. (Also, it is the "female" Cenobite (Grace Kirby) who initially moves to keep Kirsty from escaping later.)

But then that man is just a creepy uncle with no skin. Upon seeing Kirsty (and having just killed a guy in front of her), he says, "Come to daddy." Then, "You've grown. You're beautiful." And, "I bet you make your daddy so proud, don't you. So beautiful." So, I suppose this story isn't saying anything too positive about men either.

In the end, Frank stabs Julia to death (somewhat by accident, but he isn't broken up about it, because Kirsty is available) and leaves her behind. Uses her and drops her. In that moment, it is not at all sexual, but it might as well be.

Kirsty, marked by blood (a simple visual for her sexual availability) must then fend off Frank's attack. His hedonism destroys him, as the Cenobites tear him apart. 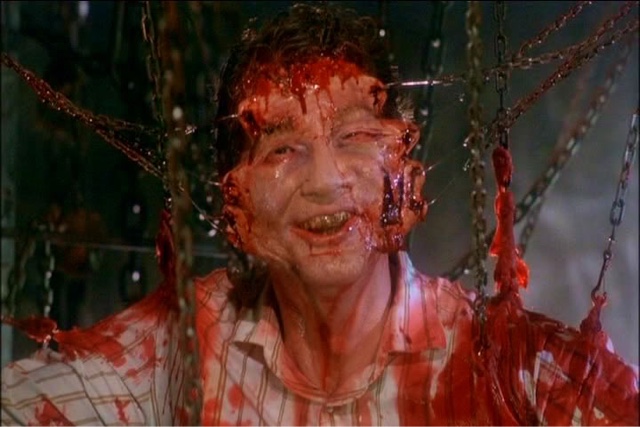 They try to turn on Kirsty, despite their deal with her to lead them to Frank) and she uses the box to get rid of them. Her boyfriend Steve (Robert Hines) shows up but is fairly useless except to give her his coat when they go outside.

Ultimately, the metaphor is simple--the destructive nature of sexuality, its power over us, its ability to drive us to do things we shouldn't, but also its ability to give us strength.