be gentle with her, okay

I like good horror movies because I enjoy being surprised (and sometimes even moved), but there are no surprises in "Hellraiser," only a dreary series of scenes that repeat each other. What fun is it watching the movie mark time until the characters discover the obvious? This is a movie without wit, style or reason, and the true horror is that actors were made to portray, and technicians to realize, its bankruptcy of imagination.

1. Roger says "the Cottons buy the house" despite a "kitchen sink... full of maggots devouring rotten flesh." Well, no, they kind of inherited it. It was Frank's and Larry's mother's house. And, upon arriving, neither Larry nor Julia is particularly impressed by the place. Julia's first observation is about the smell. But, more importantly, Larry wants to move into the place (which he wanted to sell when his mother died) because his marriage is not going so well. That is not stated explicitly, but it is the point.

2. Roger says Larry and Julia "move in with their daughter" but Kirsty has her own place. Her third line (after "Dad? and "I got through") is "I found a room."

3. #2 matters because that "obvious" thing that Roger is saying everyone takes too long to discover is the fact that a skinless Frank is living in one of the rooms. A few subpoints:

a) Because Kirsty doesn't live there, and finds Frank as soon as she thinks something is up with her stepmom and goes into the house to check.

b) Julia, of course, discovers Frank as soon as he shows up.

c) Larry is off at his "terrific job"--which I would guess is the reason he moved them out of Brooklyn to his mother's old house. Probably also the reason his marriage isn't going so well. He's never home. The first time he hears noise upstairs, he goes to investigate but Julia distracts him with sex.

Plus, we never get a good idea of how big the house is, so Frank hiding in the shadows in one empty room is not that obvious.

4. The movie also doesn't "mark" much time. Julie decides to help Frank the night that she finds him. She starts killing men (presumably) the very next day. She (or Frank) kills three men (before Larry), maybe one a day. The movie does not cover a lot of time.

5. As for that stuff about the film lacking "wit, style or reason" and the "bankruptcy of imagination" (a great line, to be sure, but, I would argue, entirely wrong), let us look to another reviewer--Michael Wilmington of the Los Angeles Times (18 September 1987). He writes: "Clive Barker's Hellraiser is one of the more original and memorable horror movies of the year; a genuinely scary but also nearly stomach-turning experience by a genre specialist who seemingly wallows in excess and pushing conventions to their ghastly limits." Opinions differ. It is inevitable.

Melanie Pitts of the Voice (6 October 1987), says "The plot is difficult to follow and the characters impossible to care about." The plot, I'd say, is one of the simplest in horror outside of a slasher film. Dead guy needs fresh corpses to come back to life because he escaped from a band of pain-is-so-close-to-pleasure demigods. That second part about the characters being "impossible to care about" though--I take serious issue with that.

A woman in a passionless marriage who yearns for her brother-in-law with whom she had a previous affair. What's not to care about? I mean, if you like movies and can find it in yourself to care about any characters, what draws a line here in particular?

A daughter worried about her father, who (the father, not the daughter) lives with a stepmother who is a bit cold and aloof around her. Did you have trouble caring about, say, Cinderella, as well, Melanie?

Melanie continues: "The best scenes between Julia and mucus-man Frank don't make up for the fallacy of assuming that an otherwise normal woman would become a murderer because of her sexual obsession with a formerly dead man." A couple things: 1) if Julia is so "otherwise normal" why can't you care about her? 2) a "fallacy" is a mistake in reasoning, and there is no fallacy to Julia turning to murder because of her sexual obsession. Especially in film--turning to murder because of obsession, that's practically a cliche and far from a fallacy. Plus, Melanie's next line is to say that "Larry is a nonperson" so between the sexual dynamo who seems to be getting his skin back at the cost of a few sleazy guys who want some easy sex with a woman they just met, and the "nonperson" who are you going to choose? Me--I'd go for skinless. 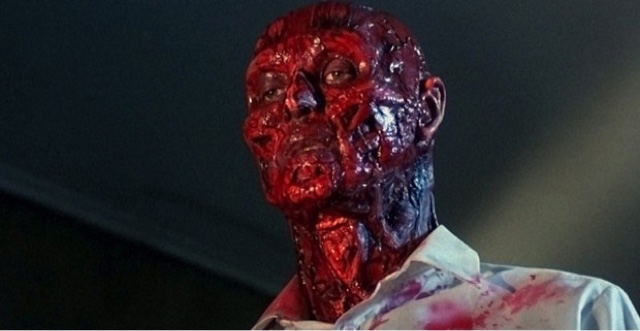 Melanie's next line: "Kirsty's name speaks for itself." I'm not sure how to take that, except that it seems like a blanket insult to all people named Kirsty.

That "nonperson" by the way just demonstrated immediate concern for Julia when she said she felt sick. He may seem a bit absentee, but he also seems to actually care about his wife.

Robert E G Black--me--calls the film "a gruesome romp into sexual perversion and obsession in the name of romance" but more on that tomorrow.