they changed the rules of the fairy tale

Generally speaking, there are two kinds of nightmares: the kind that you actually have, and the kind they make into movies. - Roger Ebert

Of course, he also claims that Hellbound: Hellraiser II "has no plot in a conventional sense." I'm not so sure about that, but, to be fair, it has been a while since I've watched this movie. We'll see soon enough.

Opening with pre-Pinhead solving the box works well. He seems to be opening it more out of boredom than some obsessive desire like Frank. And, the quick montage of the creation of Pinhead sets up the end of this film--Dr. Channard (Kenneth Cranham) becoming a Cenobite. But, the closeups on the head wounds-- 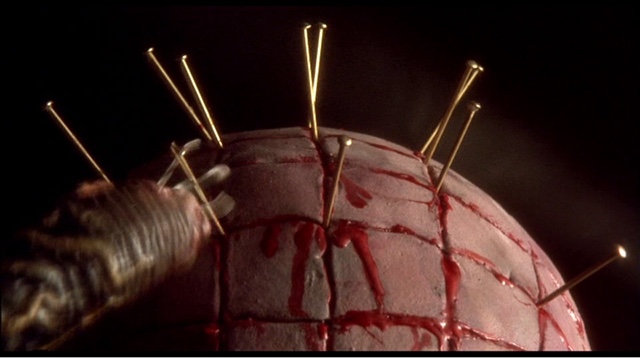 --invoke some of the imagery of the labyrinth we will see later in the film, as well.

On the... agreeing-with-Roger front, Annie Billson wrote in Sky Magazine, February 1989, "This is the kind of film which abandons logic for a non-stop barrage of weird goings-on and ultra-gory special effects."

A reviewer called Phantom of the Movies at the Daily News, 28 December 1988, says, on the other hand, "Hellbound: Hellraiser II represents one of those rare cases wherein a scare sequel actually surpasses the original..." Which, I guess, doesn't technically contradict Roger or Annie. Of course, the Phantom continues: "The real treat for fright fans here is not Hellbound's fragmented narrative but its impressive array of shock tableaux.

On the (supposedly) fragmented narrative, Roger calls the film, "simply a series of ugly and bloody episodes strung together one after another like a demo tape by a perverted special-effects man. There is nothing the heroines can do to understand or change their plight and no way we can get involved in their story."

Our heroines include Kirsty (Ashley Laurence), survivor of the first film--and this film picks up only hours later. Police are still on the scene at the Cotton house. And, they find the mattress on which Kirsty found Julia.

(A bit of a plot hole from the original, actually, as Frank drains life from Julia and leaves her apparently dead, but Julia finds her on that mattress, with hooks and chains in her, and Lemarchand's box in her hands. Kirsty had that box last, the Cenobites come to the house without her manipulating the box again. Even if Julia was still alive after we last see her with Frank, there was no reason for her to get and manipulate the box (nor might she have been able to solve it in time).)

Then again--something I neglected to write about the last few days with the original film--Kirsty did have that (possibly) prescient dream in the first film, so maybe there's just something more to her than meets the eye. However, to suggests as much, I think it is necessary to interpret Kirsty's dream--the baby crying, the death shroud slowly soaking in blood. If we take it as strict (but vague) premonition, the shroud is her father's, the baby crying is her (Kirsty). (Plus, a baby crying when there's no baby around--that's just creepy. Hence more of the same in this film.)

(And, just now in this second film, she saw her father's skinless corpse (or so she thought) and took it as fact that he was in hell, alone, suffering.

She also seems pretty sure about her mother and Frank having "been with each other." And about her mother bringing him men to make him stronger. Kirsty should not know any of this. Hell, she shouldn't even know the name "Cenobites." Frank only said that name to Julia.)

Sidenote: on the one hand, I do not find women without skin particularly attractive, but on the other hand, if I am witness to a woman emerging from a bloody mattress and killing a guy and she comes on to me, I do not think I would have the guys to refuse.

In case you have not seen the film, Dr. Channard just kissed the recently un-deceased Julia (Clare Higgins), who has no skin and is wrapped in gauze, not the most appealing fabric.

A very brief montage and several dead bodies later and Julia's got skin. Plus, you know, she's evil now--even comes on to Kyle (William Hope) with a "Come to mother"--either because she killed those men in the first film, because she just killed the patients Channard brought over in this one, or... you know, stepmother's gotta be evil. That's just good storytelling.

But, the meat of the story here is Channard. He is even more obsessed than Frank was. He's got three of Lemarchand's boxes, plus diagrams and old photos, and he brings in a semi-catatonic patient--Tiffany (Imogen Boorman)--to solve the puzzle for him. He approaches even his own obsession like a scientist more than a human being capable of actual feeling. He's cold and calculated about it. The four Cenobites from before--Pinhead (Doug Bradley), Butterball (Simon Bamford), Chatterer (Nicholas Vince) and Female (Barbie Wilde) (no Engineer anymore)--arrive and Pinhead proclaims, "No, it is not hands that call us, it is desire." Tiffany is safe. Channard is... Well, he's not safe, but he also doesn't really want to be.

And, into the labyrinth we go. I really do not get the "fragmented narrative" complaint. It's hell (sort of)--it's supposed to be a little confusing. And some of the sequences have a dream-logic to them, but structurally the film is just not confusing. Tiffany opened the doorway to hell and no one closed it. Channard and Julia went in deliberately. Tiffany was curious and went in. Kirsty wants to find her father, so she went in as well.

Interesting call back to Kirsty's bloody shroud dream in the first film--she sees a few orgasmic women under shrouds. But, when she pulls the sheet from one, the woman disappears. There is room for some serious commentary about motherhood and femininity and, especially, female sexuality in these visions. The enshrouded women appear again, bloody like the body in Kirsty's dream before. And the Uncle Frank (Sean Chapman) arrives. Those women are part of his hell, teasing him but never delivering. Like Kirsty, as he sees it, I suppose. But Julia arrives and literally tears his heart out.

This movie (and the first one, for that matter) has a tendency to lean on a sort of girl-power message while specifically utilizing visuals that suggest the opposite. Here, those visuals are at least in Hell and not, strictly speaking in reality.

These movies are so short, there isn't room for too much serious commentary. Though, there seems to be a deliberate evocation of Kirsty as mother-figure in protecting Tiffany.

Channard, of course, took Tiffany from her mother, killed her mother, and rather than help Tiffany used her obsession with puzzles (and even did some sort of surgery on her toward this end) to set her up for this. It's classic mythology building and Freudian cinematic storytelling to have Kirsty reject her own (step-)mother and take the place of Tiffany's mother. The only way to become a man in classic Hollywood is to "kill" the father; the only way to become a woman is to "kill" the mother.

Meanwhile, Channard has gone and turned himself into a very phallic monster. "Hell" seems quite stuck on gender issues.