been to a place you couldn't possibly imagine

Now, we move beyond the actual Hellraiser sequels past Bloodline because they are, well, not good.

Instead, the spiritual sequel--Event Horizon. 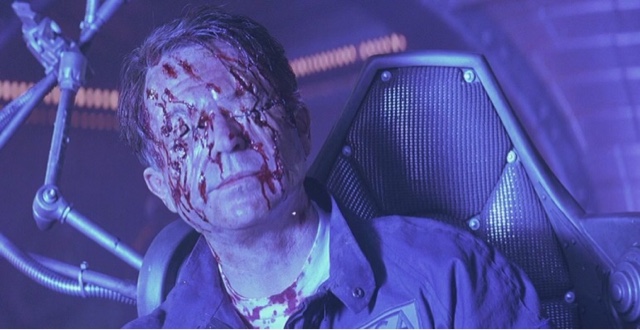 Let us get the negatives out of the way: as io9 says, "Event Horizon commits many flagrant fouls when it comes to ripping off other, better films (including, but not limited to, Alien, The Shining, 2001: A Space Odyssey, Solaris, Hellraiser, and The Haunting)." Of course, that same io9 article claims that the film "tanked" at the box office. It was #4 its opening weekend, covering $9 million of its $15 million budget. The next weekend, it would drop to #11 but would still make another $4 million, another #3 million its third weekend, another million its fourth. Sure, its not blockbuster numbers, but I'm not sure that quite qualifies as tanking.

Plus, I was there opening weekend, and I think I may have even seen it a second time in the theater. So, regardless of the facts, I just don't feel a tanking here. I had read about this film in Fangoria and was looking forward to it. And, I love this movie. It's mostly horror, but with a nice science fiction skin over the top.

By the time I saw it, I knew that the Event Horizon was designed as a sort of stretched out version of Notre Dame, that religious imagery was going to be all over the place. I did not know that the "meatgrinder" corridor actually messed with the equilibrium of the actors when they had to walk through it, or that the magnetic boots only exist in this film because filming in zero-g for the entire film would have been prohibitively expensive. Might have also looked weird; I just saw The Martian a few days ago and fake zero-g--at least, I hope it was fake--still looks awkward, so if you gotta boot around it, I say go for it. Plus, after the Lewis & Clark ship has trouble and everyone has to get onto the Event Horizon, they've got the artificial gravity on. Got to be practical about this stuff.

The Event Horizon's gravity drive is like a new take on the Lament Configuration, of course. While a third of Hellraiser: Bloodline was Hellrasier-in-Space, this movie is Hellraiser-in-Space. The crawlways with all the green circuit boards the labyrinth of Hellbound. Justin (Jack Noseworthy) is like Frank; he sees what is on the other side of the gateway and comes back... wrong. Weir (Sam Neill) is like Julia in Hellbound, not so much wrong as transformed by the experience. Or maybe he's more of a Cenobite, with his empty eye sockets. And what he does to DJ (Jason Isaacs). Oops, forgot the SPOILER warning.

One thing this film doesn't do is depend on horror tropes like the Final Girl of slasher films. Captain Miller (a pre-Matrix Laurence Fishburne) is not much of a Final Girl. Starck (Joely Richardson) comes closer--and not just because she's female.

In the end, this isn't a slasher film, anyway, so that doesn't matter.

It also isn't a, strictly-speaking, religious/occult horror film either. The other dimension is not really Hell anymore than the other dimension in the Hellraiser films was... even if those films drifted closer and closer to Abrahamic religions' version of Hell and demons as they went. In the reality of either film, you could imagine that this other dimension is where someone, once upon a time, came up with the idea of Hell, but that is not the same thing as being it.

Now, as the credits roll, and I think about how the month is coming to an end in a few days, I realize how many movies I had wanted to get to that I just did not manage. Spent too many days on some films... and not enough on others. And, the month is too short. I am sure that I can find an excuse for a horror film now and then outside this particular month.

But, I also wonder what the point is. When I run with a particular theme, I try to form a specific thesis, a singular argument that ties it all together. This month of horror films has definitely spiraled in around a religious theme, and I've got a couple of the big, obvious, religious horror films left in the next few days. So, going into these last few days, what I am thinking about it that link between religious belief and horror, how one leads to the other and the vice versa. I am reminded of a line from the song "War on Drugs" by Barenaked Ladies: