you were all human

Paula Ashe at Ginger Nuts of Horror takes it a little far in saying that, in Hellbound: Hellraiser II, Julia "is no longer working on anyone's behalf but her own, bringing souls back to Leviathan, a god that she has decided to serve." While Julia seems quite willing in all she does here, the murders, pushing Channard into that... thing that transforms him. But, she was willing in the first film as well, even as she operated quite explicitly within the confines of patriarchal society. Paula continues:

Julia's purpose is not just concrete, it is now given a spiritual dimension as well, a philosophical motivation that transgresses the basic moral and ethical codes of not just patriarchal society, but civilization itself.

This is inference on Paula's part, not any implication that comes from the film itself. Consider: why does Julia emerge from the mattress in the first place? Why did Frank emerge from the floor? Does the blood pull them out unwillingly, or is the recruitment Julia makes here the reason Julia (here, and retroactively, the reason Frank before) "escapes." Keep in mind, it is Kirsty, before she knows anything about what's going on, who tells the Cenobites that Frank escaped. And, here in the second film, Kirsty imagines that the skinless man she sees is her father, writing in blood on the wall: 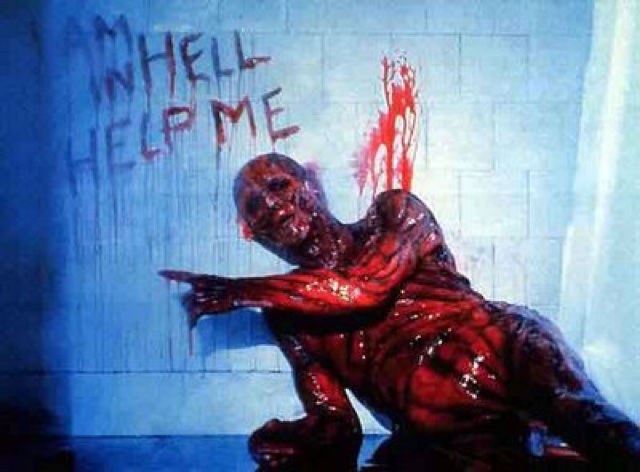 Kirsty presumes the identity of that figure, and she is wrong. Her father is not involved in this story at all. Nor is here mother, but for a photo. Julia is Kirsty's stepmother. Taking the implicit fairy tale angle (made explicit by Julia herself), Julia is the "wicked stepmother." Julia is a stronger figure than she was in the original, as is Kirsty. And, I might be suggesting that this film is feminist by the end of this entry. But, I don't think that the film ever really separates Julia, or Kirsty, from the patriarchal society. Even hell, as seemingly endless and deliberately disorganized as the labyrinth seems here, has an order to it. Cenobite Channard violates that order almost immediately with his homicidal joy. The mythology of the Cenobites is not very clear at this point. But, consider these details from Barker's novella, The Hellbound Heart:

First of all this:

The doorway was even now opening to pleasures no more than a handful of humans had ever known existed, much less tasted--pleasures which would redefine the parameters of sensation, which would release him from the dull round of desire, seduction and disappointment that had dogged him from late adolescence. (p. 5)

The implication there fits with Frank's hell in this film, the women who writhe in pleasure but disappear when you try to get to them. Frank is a womanizer and, seemingly, a misogynist. He has gone through the rounds of "desire, seduction and disappointment" and he seeks something more. In fact, he expects the "theologians of the Order of the Gash" (who he had never bothered to imagine) would arrive with, going with that old Groundhog Day terminology, accessible women:

...he had expected something different. Expected some sign of the numberless splendors they had access to. He had thought they would come with women, at least; oiled women, milked women; women shaved and muscled for the act of love: their lips perfumed, their thighs trembling to spread, their buttocks weighty, the way he liked them. He had expected sighs, and languid bodies spread on the floor underfoot like a living carpet; had expected virgin whores whose every crevice was his for the asking and whose skills would press him--upward, upward--to undreamed-of ecstasies. The world would be forgotten in their arms. He would be exalted by his lust, instead of despised for it. (p. 9)

A hedonist paradise is what Frank expected. Perhaps he did escape because the pain-is-so-close-to-pleasure way of doing things was too much for him. Why, though, does this turn him into a homicidal leech? How does he know that blood brought him back and more blood will bring him... more back? Julia at least has the precedent with Frank to go by when she returns. She has seen this work before.

But then, another question arises. Why does she want skin at all? She claims later she brought Channard in because it (Leviathan, or maybe just the labyrinth itself) wants souls. Did she emerge just to retrieve Channard? Or was Channard's urge inward conveniently timed for her urge outward (if she had such a thing)? Perhaps her "escape" and the murders to follow were actually just a test to see if Channard was worthy of being a denizen of the labyrinth? At this point in the larger story, we do not actually know that anyone has found through Lemarchand's box the pleasure he or she actually sought. Maybe Frank's hell that we see here, with the teasing but unavailable women is exactly what he found after being torn apart in the first film. So, of course, he would want to escape... the mechanics and timing of the blood making that possible is never explained; it simply is.

Frank was not homicidal--as far as we know--until he needed to be in order to survive outside of hell. Julia was homicidal for him, for lust... suggesting a very anti-feminist theme, actually; as Helen (no last name given) at a blog named for Hellraiser, Order of the Gash describes her, she's a "tiresome plot device of a Woman, Ruled by Her Emotions, Who Will do Anything for Her Ne'er-do-well Lover With Whom She Has Hot Sex." Julia describes herself in this film as not just the wicked stepmother but also the "evil queen." She is clearly fine with going back into the labyrinth. But, I have to wonder, if she was supposed to recruit Channard, why does she not open the box for him? Her willing participation does not quite mesh with not simply taking charge and opening the doorway herself.

More on the Cenobites:

Why then was he so distressed to set eyes upon them? Was it the scars that covered every inch of their bodies, the flesh cosmetically punctured and sliced and infibulated, then dusted down with ash? Was it the smell of vanilla they brought with them, the sweetness of which did little to disguise the stench beneath? Or was it that as the light grew, and he scanned them more closely, he saw nothing of joy, or even humanity, in their maimed faces: only desperation, and an appetite that made his bowels ache to be voided. (p. 7)

Of course, Hellbound's climax relies on the idea that the Cenobites are (were) very much human. Pinhead was Elliott Spencer, a soldier. The Female Cenobite was Sister Nikoletta, a nun. (Note: not all of this detail is from the film.) Butterball was a guy named Laslo. Chatterer was just a little boy.

More from the novella:

Frank had difficulty guessing the speaker's gender with any certainty. Its clothes, some of which were sewn to and through its skin, hid its private parts, and there was nothing in the dregs of its voice, or in its willfully disfigured features that offered the least clue. When it spoke, the hooks that transfixed the flaps of its eyes and were wed, by an intricate system of chains passed through flesh and bone alike, to similar hooks through the lower lip, were teased by the motion, exposing the glistening meat beneath. (pp. 7-8)

Also, the Cenobite that would in the films become Pinhead, was described a couple paragraphs later:

Its voice, unlike that of its companion, was light and breath--the voice of an excited girl. Every inch of its head had been tattooed with an intricate grid and at every intersection of horizontal and vertical axes a jeweled pin driven through to the bone. Its tongue was similarly decorated. (p. 8)

This film tells us that these Cenobites are humans who took to the pain and pleasure thing. Maybe they do not even serve Leviathan at all. Maybe this is why Pinhead attacks Channard. Maybe that is why Julia is not a Cenobite.

But, then we're getting into serious nerd territory, creating mythology where there is none, when I really just wanted to talk about motherhood and Hellbound as a feminist film. Oh well. Maybe tomorrow.