the whole place is such an enormous maze

Regardless of deeper reasons--the Native American genocide, the holocaust, the moon landing--Kubrick doesseem to have deliberately toyed with set layouts and the positioning of doors and windows in order to keep things a little off kilter. The opening credits running upward add to that. With opening music that seems far more sinister and dark than the driving scene it plays over. That there is no hedge maze anywhere near the hotel in the establishing shot yet that maze will be vital to the climax of the film is another.

Then there's the so-called "impossible window" in Ullman's office opening to daylight and plants when the lobby we have just tracked from (without any cut) implied another hallway is behind that office.

Ullmann mentions Grady's daughters being 8 and 10, yet they are played by twins. (And, anyone who hasn't read the book always assumes they are twins. Ullman's line about their ages is just in passing and we haven't seen the twin sisters yet. 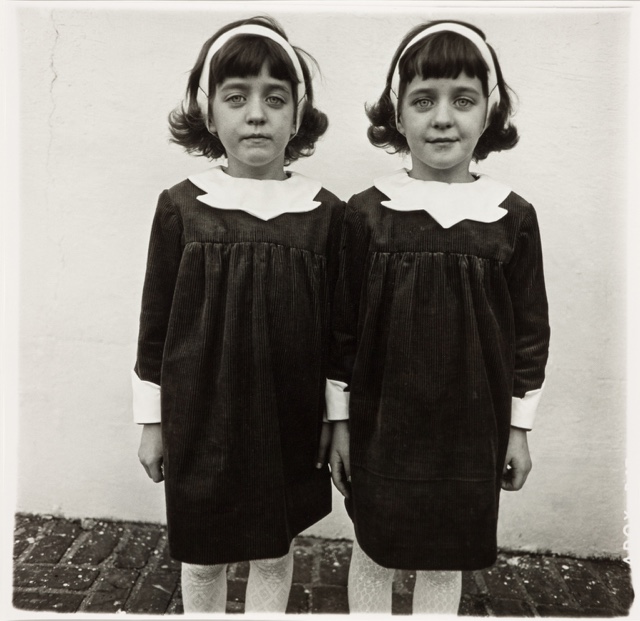 We see them briefly when Danny first sees the vision of the blood from the elevator, but don't really see them clearly until he's in the game room later.

And, no, that image isn't them. That is a Diane Arbus photo from her twin series. Supposedly the model for the look of the Grady girls in the film...

Distracted by a search for an aerial shot of the Timberline Lodge (the exterior for the Overlook in the film), I may have missed something, but a big element of Kubrick's toying with reality comes when Hallorann shows Wendy the kitchen. They're walking toward the camera, open kitchen space behind them. Hallorann reaches to the left side of the screen, grabbing with his left hand a handle that is on the right side of a freezer door (i.e. it opens out to the left, toward the camera). Cut to a shot from inside the freezer and that door is now swinging out to the right (our left) and he's opening it with his right hand. When they exit the freezer, they are now on the opposite side of the walkway they were before, the end of the walkway behind them. The space has reversed itself. They even walk past the freezer door he opened the first time. (They also pass another, similar door on the same side of the walkway as the freezer door from which they have just emerged which has to go nowhere because it would be opening into the pantry they will go into next.

At this point we have seen the interior of the apartment where the Torrances will be staying, but it won't be until nearly the end of the film that we really see the problem with it's interior--another impossible window in its bedroom as the bathroom window (which is at 90 degrees to that window) opens out onto a flat part of the exterior. The interior apartment set is a corner apartment, but its exterior is not.

If this is confusing, just know that there are doors outside the apartment that do not go into it. Or check out Rob Ager's diagrams. When Danny rides his Big Wheel (the second time; his first ride around the Colorado Lounge and kitchen actually works pretty well at establishing space) around, he is riding around the second floor next to the Colorado Lounge and he passes doors behind which there just is no space for any rooms (they are behind the elevators), and barely space for useful storage. Again, check Ager's diagrams. If I were watching this film for a longer period of time, I'd make my own diagrams, get my own screencaps, but I'm really just trying to establish that there are physical layouts that don't quite work within (and without) the Overlook Hotel.

The chair that disappears when Jack gets mad at Wendy for interrupting his writing--I chalk that up to a mistake. But, set layouts, the locations of windows and doors--that isn't something that just changes from shot to shot. You have to alter that stuff (or build it so that it doesn't make sense) on purpose. Similarly, the bit where Danny is playing with his cars and a ball rolls up to him. The position where he and his cars are reverses, yet the cars remain in the same order. Proper continuity with the cars lines up with deliberate discontinuity with the surroundings (and the carpet design). This stuff is there on purpose. But, what, then, is that purpose?

Is it Kubrick's way of representing the haunted hotel in its labyrinthine glory? Is he just toying with us? Though I don't buy that theory in Room 237 that there's a minotaur on that skiing poster, clearly, the film deals in maze structure, literally in the hedge maze outside--for which, the aerial shot, the sign bearing a map, and the tabletop model don't match, by the way--and figuratively in the hotel layout. The Torrances are not just trapped in a hotel for the winter; they are trapped in a supernaturally-infused labyrinth. Jack just has to lose his mind enough to become its minotaur...

Which is an issue for tomorrow.