i am so exquisitely empty

The thing about the Hellraiser franchise is is started as something different from other horror films. It wasn't just about a string of murders like a slasher film, or some last-minute empowerment of the "Final Girl" to kill the monster. Clive Barker has an interesting take on monsters that he shares with Nigel Floyd of Time Out magazine, September 2-9, 1987:

I write the kind of horror fiction in which the monster has to be made peace with, one way or the other. Within the metaphorical world which I create it's not possible to throw the monster out and assume that one's house has been purged. The house can never be purged, because the monster is part of the texture of our internal workings.

It's the metaphor thing. Like your classic ghost story, Hellraiser is not about the Cenobites but about Julia and her relationship with Frank, what she will do for him. Hellbound is not about the Cenobites or even Leviathan and Hell; it's about (again) Julia and what she was turned into by the events of that first story, and it's about Kirsty and who she has and will become in the face of... well, it is Hell and the Cenobites, but it might as well be anything horrible--the death of her father, the sudden disappearance of her boyfriend, the ire of her stepmother... The key is that there is a story there, about a woman who wants something and will do anything to have it, about a girl who must grow up in the face of being orphaned. This is, arguably, a feminist sort of tale. Julia has the power in the first film until she gets into something she doesn't understand. But it is not because she is female that she doesn't understand it. It is because no one understands it. Frank tried to and, for whatever reason, had to escape. He needs Julia to survive on the outside. But, at that point, it might as well be prison he has escaped. The story is, in its broad strokes, quite mundane. That Julia suffers and dies after having too much power does not mean that it is anti-feminist. Rather, it becomes more of a cautionary tale. Power just isn't the thing you need... exactly.

And I write that as Duc de L'Isle (Mickey Cottrell) summons Angelique (Valentina Vargas) with the recently completed puzzle box. He preyed upon a poor, naive girl and skinned her to make a demon. And she must serve him (and then Jacques (Adam Scott) until he "stands in Hell's way"). But, the franchise drifted away from the (potential) feminist angle two films ago.

I've already argued that Kirsty's role in Hellbound is to replace her stepmother, become a mother to Tiffany. And, some might think that is antifeminist, that she must embrace motherhood. But, she rejects Channard, she rejects Frank, and she (sort of) rejects Pinhead. She does not end up with a man (which she sort of did at the end of the original) but leaves with Tiffany.

Jump ahead to Hellraiser on Earth and Joey and she seems at first blush like a strong female lead... or rather a "strong female lead." She's like the cinematic idea of a strong female, not much of a real strong female. She dreams about her dead father (and then dreams about Elliott Spencer (AKA Pinhead)). She goes after the story, but only barely. She even tries to be a sort of mother to Terri. But, really, there is little to the character of Joey Summers that screams female. She just happens to be female. Which is one way of telling a feminist story, I suppose. Except, how much greater a feminist story to embrace the feminine without embracing the usual idea that feminine means weak. Julia is feminine. Kirsty is feminine. But, neither one is weak. Joey is only feminine in her weakness, her attachment to the father she never knew. Terri, who is maybe the more complex character, is complex because of her weakness and that weakness is her undoing. She ends up sacrificed to act three, becoming one of the many monsters (and not one that gets one-liners).

The worst thing about Hellraiser on Earth in regards to the feminist angle is that Joey is ineffectual except as an agent of the deceased Elliott Spencer. Even then, she solves the puzzle box which has turned out to be easier and easier each time anyone has solved it. Ultimately, Elliott defeats Pinhead. Joey does very little.

And then, there's today's film--Hellraiser Bloodline. Angelique is interesting, especially after she turns on Jacques, but then she gets to America and a) must play the role of seducer with John Merchant (Bruce Ramsay) and b) get talked down to by Pinhead (Doug Bradley). (In the theatrical version) she has very little power. (She may have a bigger role to play in the so-called "workprint" version of the film, but I have not seen that one, just yet.)

The real villain here is Pinhead. (He violates the rules that Elliott said Hell had--taking innocent lives without hesitation but to do a bit of a monologuing.) The hero is Philip/John/Paul Le Marchand/Merchant. John's wife Bobbi (Kim Myers) has her moment, manipulating the box to fend off the Beast (a more dog-like version of Chatterer) and then get rid of Pinhead (and Angelique, who has ineffectively tried to help John Merchant and will now a stand in for Female Cenobite). But, Bobbi has no personality other than mother, wife. We know absolutely nothing about her as an individual. 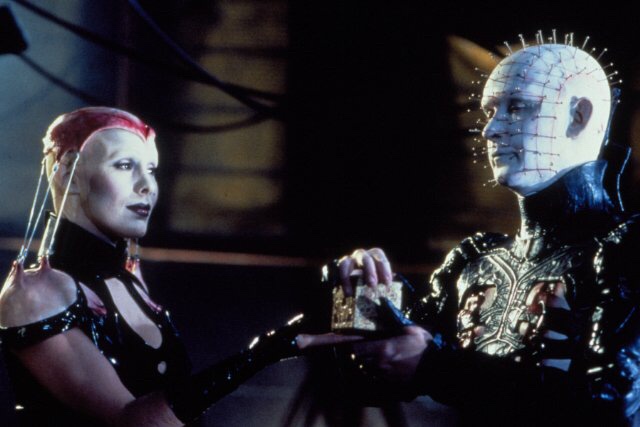 What then is the metaphor here? Horror offers us metaphor, even if only vaguely, even if only as an excuse to jump in our seats or bite our nails. Here, a family is cursed. In a world where puzzle boxes can open doorways to Hell, the idea that Philip did something worth a long-term curse on his bloodline is... understandable. Sort of. I mean, he did not know what he was making, he did not link it to Hell--that was Duc de L'Isle and his black magic. Plus, as soon as he knew what he had created, he designed a way of reversing it, the Elysian Configuration to combat the Lament Configuration. It just takes a few hundred years for one of his descendants--Paul--to be able to manage it. If the metaphor is specific, it's something like reparations--the idea that it is never too late to be forgiven and make up for one's mistakes. This very idea counters the notion of Hell. So, what Bloodline offers is essentially an argument against the existence of the very thing it invokes--Hell.

Just as Pinhead claims he has no faith, neither does Bloodline. Hell becomes little more than an idea, the Cenobites little more than your usual cinematic monsters. If the series ended here, the "house" would, indeed, be purged. But, the metaphors would continue. There would still be temptation, there would still be seduction, there would still be pain. Pinhead is not wrong when he claims that he cannot die because he is "forever." The idea of him, the idea of a Cenobite, the idea of a demon, the devil, Hell--that can never die, because, well, human nature allows us to do bad things... or rather, it allows us to conceive of the idea of "bad" to apply to some of the things we do. Bloodline may be an atheist film in the end, but it never foregoes morality.