so much for my luck

Now, I put on the remake of Poltergeist expecting to hate it. I don't know that I expected it to actively annoy me in the first 5 minutes, with the iPad monster game (instead of a television), the slightly creepy music, a weeping willow instead of the mangled tree (weeping willow shaming, in the modern parlance), and putting the title of the film into a field. Not to mention the older daughter Kendra's (Saxon Sharbino) fear of powerlines followed by a shot that positions the towers with the powerlines ominously over the neighborhood. There better be a cemetery and not just some weird powerline bullshit. I mean, next there will be a horror film about how vaccines cause autism and homicidal monsters.

Then, younger daughter--Madison (Kennedi Clements)--speaks to the closet, because I'm guessing whoever wrote this remake remembered there was a closet but thought we wouldn't have the attention span to deal with the television first. 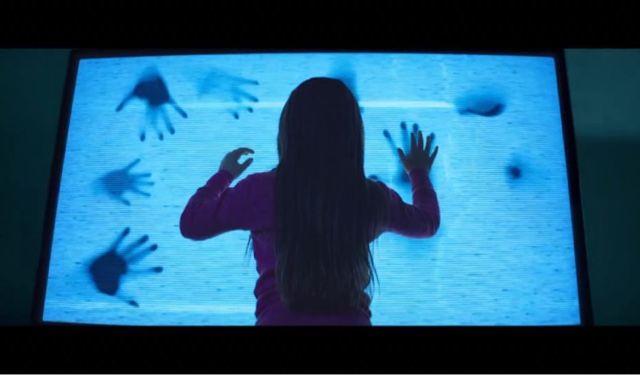 For some reason, the son, Griffin (Kyle Catlett, who played T.S. Spivet more recently) is a nerdy kid who has never played, well, anything apparently with his father even thought he looks to be at least nine or ten. And, the father, Eric (Sam Rockwell, whose talent will surely be wasted in this movie) throws a baseball like twenty feet over the son's head and then they both blame the kid for missing it. (Later, it turns out Eric was an MVP in... college? So, he should probably have been able to throw a little better.)

Kendra watches a haunted house tv show starring Carrigan Burke (Jared Harris) (and talks to her friend she missed, because the Bowen family just moved into this house, which turns this into a much more cliched horror film already, new house... gotta be haunted) and I was told that they replaced Tangina with a man. I like Jared Harris, but I am wary of the schtick of those few seconds of his character so far.

Griffin is the one who calls for a nightlight, rather than Madison needing light. I'm afraid this whole movie is going to be a gender switch on the original.

No marijuana. Instead, Eric and Amy (Rosemarie DeWitt) drink wine.

Of course the clown was in the closet. Had to take the already creepy clown and make it creepier.

Faraci (2012) actually makes a point about how Diane in the original was a stay-at-home mom. "In 2012 this character probably couldn't exist," he writes, "she would have to be a writer or a painter or sell crafts on Etsy because the modern movie world doesn't truly respect stay at home moms." Yeah, Amy is a writer. Good prediction, Faraci. Bad character creation, filmmakers. Everyone's gotta have some extra thing that makes them unique.

I may just have to list the things that are bugging me, make life easier.

Stacked comic books instead of chairs, son sees them instead of the mother.

The orange and blue all over the house.

The repeated shots of the powerlines--reminding me of Shyamalan's The Happening which is almost never a good thing.

The mother leaves the house, and gets to be there to hear about... yay, there is a cemetery.

The fear of technology is strong in this movie. And, Kendra gets to hear the ghost-static with her brand new iPhone. Can we not just have some some supporting characters that barely do anything?

Kendra. Basement. Creepy tar or oil or whatever. With a hand in it. Some ghosty child thing hanging out nearby.

(Kieran just said I sound like Cinema Sins. I'm okay with that.)

The void is dark.

No face-tearing, I guess, since Eric gets the kitchen hallucination, and it's not as interesting.

Griffin: Here and not here at the same time.

Griffin: Then someone should go in there and show her the way back here.

She is technically correct because it's not even an idea. To steal from my son--whose here enduring the film with me--that's like saying "we need food so we should get some." Duh. We should not pretend like the kid is brilliant. An hour ago, he was blamed for not catching a ball thrown twenty feet over his head. Now's he's a genius.

No Tangina. With his hat, Carrigan seems like a ripoff of Father Merrin from The Exorcist instead of Tangina. Without the religion, though. And it's the son and the father asking all the questions. Amy is the useless one in this exchange.

The best exchange from the original doesn't happen here. There, Tangina was getting ready to tie the rope to herself and go into the portal. Diane says she's going with her. "You've never done this before," Tangina says. "Neither have you," Diane replies. Tangina thinks for a beat, then replies: "You're right. You go." It's awesome. Here, Amy wants to go and Carrigan says, "Youv'e never done this before," and for some reason everyone is talking at once, arguing about nothing. And, Griffin had disappeared upstairs. He's going in. Because this movie has to give all the important actions to males, while still dismissing the expert. Having its cake and eating it to, as the saying goes.

Carrigan going in to save everyone.

Why did they drive away from that new house? Why go to look at a house and then just leave?

Extra scene with Carrigan and Dr. Powell was pointless.

So was the whole movie, really. Should have just rereleased the original.