time for the big bachelor auction

Writing on the road, movie on the small screen of my phone beside me. On the way to San Diego for the weekend for a speech tournament. Today is the 2nd of the month so it's Groundhog Day. Like coming home again...

Meanwhile, a quick recap of the past month of this blog [and here's the link to the last recap]:

I don't recall how I decided where to start the month, but I went with Say Anything (769 770 771)--one of my favorite movies, and the first movie I watched with my ex-wife. I thought this might get me into an exploration of romance or something schmaltzy, and it almost did. The next movie was Better Off Dead (772 773)--

(And, I still can't believe I didn't have the time in those couple days to get out to the location of the Meyer and Smith houses, just a handful of blocks from my apartment--I mean, I drove through Arizona and New Mexico for my month of Westerns--but I was just too busy that weekend.)

Instead of sticking with romance, or drifting back into romantic comedies--shudder--I found myself looking to the 1980s. I started with Fletch (774) and was lining up my Netflix queue for some good 80s comedies--Beverly Hills Cop was going to be next because of the Faltermeyer connection but then I decides to backtrack to the beginning of the decade first with Airplane! (775) and that got me sidetracked a bit from 1980s comedy more generally to spoof movies specifically. It got going (or continued) pretty well with Top Secret! (776) but went seriously downhill with The Naked Gun: From the Files of Police Squad! (777) and then Scary Movie! (778).

Got to theaters for The Visit (779), which was nice. I haven't been to the theater too often lately. A few big summer movies but my big movie theater season is coming up in fall and winter--Oscar season.

See, there are movies I'd like to watch for this blog, great movies that, well, have had so much said about them that I have been hesitant. I decided to squeeze a few of those in before the month was through, and that brought me to SE7EN (782) and then Memento (783) before Fight Club (784 785 786) started me in a slightly different direction--gender. The old standby. That theme got me through American Psycho (787 788) and In the Company of Men (789) and into Gone Girl (790 791), which brings me to today. 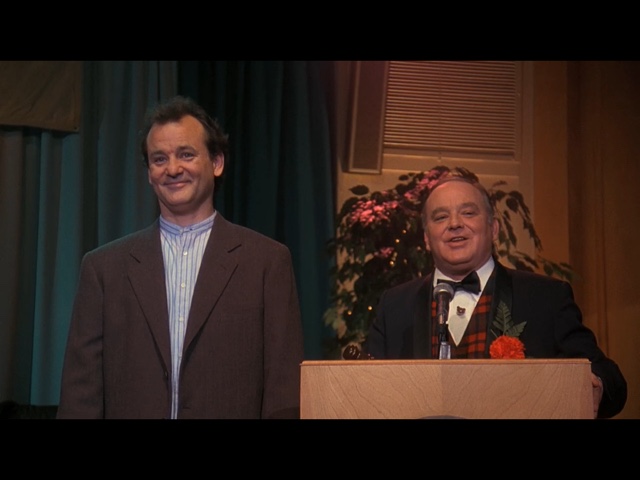 The question is--and I've talked about it before, but never in depth on the auction in particular--what does Groundhog Day tell us about men and women, about, say, feminism or misogyny? I mean, pre-loop Phil is a womanizer, but, like Patrick Bateman or Chad Piercewell, he's kind of equal-opportunity when it comes to insulting people. He doesn't single out women to make fun of, or to think he's better than. Daughton (some year I can't check easily right now, being in a minivan and all), of course, calls Phil's journey in Groundhog Day a feminine quest because it's internalized rather than externalized... which it only occurs to me now, means she doesn't think it is Phil's pursuit of Rita that drives him in the third act. I don't think I ever used Daughton as fuel for that debate. (In case you are entirely new to this blog, or to Groundhog Day, plenty of people, including many sources I would use regularly in my year of Groundhog Day viewings, think Phil only improves himself to get Rita. Structurally, sure, the film offers Rita as a reward for Phil's improvement, but that's more a bonus than a purpose.

But anyway, Phil's feminine quest brings him eventually to that stage at the Pennsylvanian Hotel to be auctioned off like property. If the character were a woman, that ending would have played so very differently. Since it's Phil Connors, former womanizer, it's like poetic justice, though come a little late for him--timed wonderfully for anybody who knew him yesterday. That he is enlightened enough to enjoy it means it's a win-win.

Otherwise, the film doesn't do too many favors for women. Nancy goes to "bed" with Phil on the day she meets him. Laraine gets tricked into a French Maid costume on her first date with Phil. Rita had to fight off Phil's advances day after day after day. After giving that detailed, and somewhat stereotypical list of criteria for perfect guy. Even Mrs. Lancaster gets an uninvited (though seemingly appreciated--but that might actually suggest another issue) kiss from Phil.

Actually, that last parenthetical does suggest another issue. Phil's uninvited kiss is not inherently a good thing, right? You shouldn't just kiss random women that happen to be nearby. But, Mrs. Lancaster is old, and presumably a widow since we never see Mr. Lancaster. She's got to be appreciative of the attention because that's a) funny and b) how we imagine older women anyway. Certainly, in movies, older women are desperate for attention from men; at least Mrs. Lancaster wasn't the one coming on to Phil.

Maybe the biggest problem with Groundhog Day in terms of gender relations is that the only person who actually resists Phil's advances ends up being the one person he'll end up with. Phil's uninvited and unwanted advances are forgiven because, well, romantic comedy. It's all good as long as it gets us to love. Nevermind that moment when Phil physically steps in front of Rita as she leaves the bedroom of his suite at the Cherry Street Inn, nevermind Phil trying to goad her into sticking around when she clearly wants to leave. There's a sort of presumption that resistance is just part of the seduction process. No means maybe later.

If this were a drama, it wouldn't be so forgivable. But, it's a comedy, Phil is funny and charming. And Rita comes around later. So, it's just fine.

And, its' 1980s-style cinematic courtship. Come back to that line from Three Men and a Little Lady: "I'm still in love with the first woman who hit me." It's a messed up idea, if you really think about it. But, in movies, that is just how it works.