i'm not putting her away

Certainly, the novelist's (and filmmaker's) target is not the female body, but the transformation that body prompts in the male psyche.

Enmeshed from the outset in Karras's spiritual crisis are issues of intimacy and sexuality. Again, Regan provides the palpable field: she stabs a cross in and out of her vagina, speaks incessantly and crudely of sexual matters, is suspected of desecrating the statue of the Virgin Mary, and so on. ...however, it appears to be Karras's own anxieties that are at stake. The nature of those anxieties is hinted at in an early scene [in Blatty's novel] in which Karras is approached for comfort by a young and lonely priest:

Of all the anxieties that Karras encountered among the community, this one had lately become the most prevalent. Cut off from their families as well as from women, many of the Jesuits were also fearful of expressing affection for fellow priests; of forming deep and loving friendships.

"Like I'd like to put my arm around another guy's shoulder, but right away I'm scared he's going to think I'm queer. I mean, you hear all these theories about so many latents attracted to the priesthood. So I just don't do it. I won't even go to somebody's room just to listen to records; or talk; or smoke. It's not that I'm afraid of him; I'm just worried about him getting worried about me."

Karras felt the weight easing slowly from the other and onto him. He let it come; let the young priest talk. (p. 88, citing Blatty, p. 88) 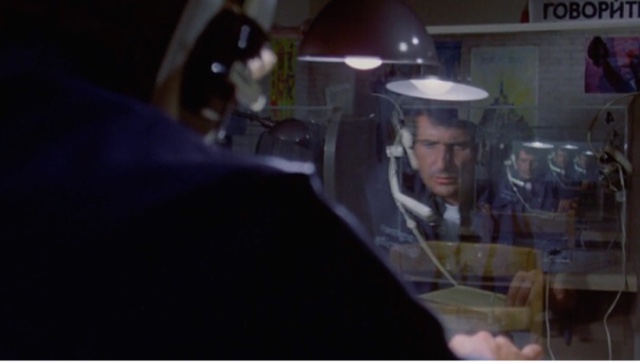 An odd sidenote before I get into what Clover is arguing: Regan tells her mother about seeing a man "come along on this beautiful grey horse" and Chris interrupts to ask if it was a mare or a gelding. Female or castrated male. Couldn't be a stallion because no old man would have control over a stallion, I guess.

Anyway, Clover is talking about anxieties that a priest like Karras has over being perceived as a closeted homosexual. Or a pedophile, perhaps. Either way, or just as a priest, Karras cannot display sexuality. He must be without. Then here he is faced with, metaphorically, a young girl in the thrall of puberty. Like Carrie White in Carrie or Charlie McGee in Firestarter or Tina Shepard in Friday the 13th Part VII: The New Blood, puberty and telekinesis go hand in hand. (Clover also cites The Fury as an example but I am not sure if I have ever seen that film.) Regan McNeil is not telekinetic, of course, but she's still a portal into something supernatural. Referring specifically to the Carrie White example, Clover suggests, "supernatural and psychosexual intersect: cause a girl enough pain, repress enough of her rage, and--not matter how fundamentally decent she may be--she perforce becomes a witch" (p. 71). This ties into my own interpretation regarding the sexual revolution and films like this one or Rosemary's Baby; treat women, collectively, badly enough, long enough, and they will demand equality. They will burn their bras, destroy their staplers and steno pads, carry picket signs and get in your face. They will get abortions when they do not want to be mothers and stay single well into their adulthood, if not their whole lives, when they decide marriage is an antiquated, patriarchal system meant to suppress the female.

So, in answer to the question I ended with yesterday, what does it cost us--Regan's story? Regan's story serves (arguably) as a metaphor for the chaos that comes with female adolescence. Someone that men just cannot control. The doctors and their tests stand in for all of civilized society. They have their tests and when those tests don't work, they have more tests, and more tests, and then they question the mother about if she has drugs around the house. Man cannot solve this problem, this uncontrollable little girl.

That Regan is portrayed as young and innocent prior to her possession and possessed Regan speaks in obscenities and makes references to sex, tells the doctors "fuck me", grabs the psychiatrist by his genitals, stabs that crucifix into her vagina then pushes her mother's face there and tells her "lick me", and tells Father Merrin, "stick your cock up her ass" and "shove it up your ass, you faggot"--this is not just an easy juxtaposition to demonstrate the corruption at play. It is that, but not just that. It also marks examples of what that corruption actually is. Regan is no longer innocent, no longer a child. She is marked now by sex. And, the obscenities and the violent masturbation are certainly a couple of the most shocking things about this film--what Roger Ebert called "brutal shocks, almost indescribable obscenities." This guy was in college in the 1960s and had already seen plenty of films by this point, and this film still cut into his delicate sensibilities. So to speak.

Even in the extremes of Friedkin's vision there is still a feeling that this is, after all, cinematic escapism and not a confrontation with real life. There is a fine line to be drawn there, and "The Exorcist" finds it and stays a millimeter on this side.

Thing is, I don't agree. I think a provocative film like this provokes deliberately, and is a confrontation with real life. Whether it is about a challenge to Christianity, specifically Catholicism, or budding feminine sexuality--there is something in this film that, watching it, we have to face. Both of these boil down to challenges to the behemoth that bell hooks calls the "white supremacist capitalist patriarchy." Men--Christian Men--their world is what Regan's story challenges.