for a short person, you have long sentences

Maybe it is because I am old, or because this apartment is often quite noisy, or just because, but I like having subtitles turned on when I watch movies, especially when I'm writing this blog. The Private Eyes' DVD has no subtitles. And, tonight, I've got a commentary track playing--costar and cowriter Tim Conway and director Lang Elliott--and can barely hear the dialogue from the movie. Fortunately, I have seen this movie so many times that I know the dialogue anyway.

Lots of talk about the Biltmore House to start. Then, some talk about the car--I'm fairly sure Conway is kidding, but he implies that they didn't tell the car's owner they intended to crash it into the water. A bunch of things right away that are in the IMDb trivia section--stunt guy nearly drowned when that car was stuck in the mud, a valuable book went missing from the library and the FBI got involved. Perhaps once we're past the opening credits, there will be more interesting insights.

Conway and John Myhers, Conway says, wrote the movie in just two days. With Don Knotts attaches also, there was nowhere to go but up. So much of this commentary is like Conway's love letter to Knotts. 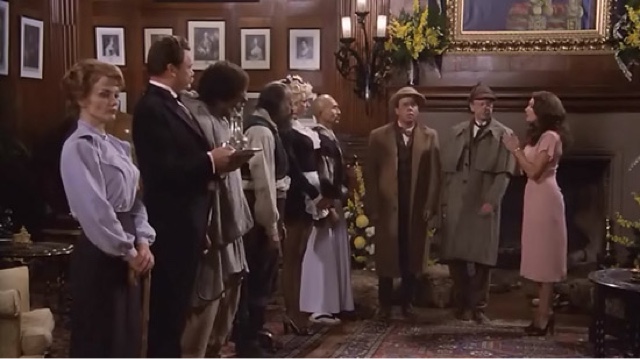 Conway claims the owner of the gas station only knew they would start a small fire. (In case you haven't seen the film, the thing explodes.) He can't help but make up stories here in the commentary track.

Secret passageways were, of course, actually part of the house. That's not a joke. Elliott says the dungeon was also part of it. I'm not sure if that's a joke.

They point out that this staff is a little odd to actually have been hired by anyone to run a household.

They ate a lot of chicken on set, and the chicken Mr. Uwatsum (John Fujioka) is chopping (they say) was dinner that night. Shot in 30 days, 16-hour days, on a low budget.

It hadn't occurred to me until I was watching this three days ago that the whole movie takes place in just one day. While Winship and Tart have a bedroom, they never actually get to sleep. They arrive during the day and it is the next morning that Phyllis is arrested. (Oh, SPOILERS, for a movie from 37 years ago.)

Elliott mentions purchasing a six-pack of styrofoam tombstones and Conway says, "Nice thing was we never saw them."

I guess it's a movie mystery thing--get in, solve the murder, get out. Of course, this movie is also a sort of haunted house story (or it pretends to be), and that makes the one-night setup make more sense.

I'd love to think there's a reason that Hilda's poem is the only one that rhymes, but all Conway does is acknowledge that it's the "first" one to rhyme. No explanation. I could, of course, theorize. I mean, as much as I've read into the costume scene in Groundhog Day, I could come up with something. (And maybe I will try the next time I watch this movie (tomorrow, probably)... or below.)

Talking about secret passageways, they mention an opening under a cupboard that allowed you to jump down into the swimming pool a floor below.

For example, why was Hilda employed at Morley Manor? Was she just the "upstairs maid" or is there more to hiring the young, European blonde to wear the skimpy uniform (on the part of Lord Morley or on the part of the filmmakers)? If she was there for something more, something on the side for Lord Morley when he had once again disappointed Lady Morley, maybe she was the one who drove him toward poetry. Or maybe he just fantasized about her. Either way, maybe when he wrote hers he tried extra hard to make it rhyme because he thought that would impress her.

Engraving the tray for Justin's poem would have cost (Conway says) $25 so they didn't get it done; hence, no insert shot of the engraving.

Or maybe the fantasy of the young maid in the skimpy uniform is (at least in terms of a film coming out of the 70s) poetry itself. Fantasy and love and art all rolled into one blonde little package, so of course her poem has to rhyme.

Knotts handed the last note to Conway (Conway says) because he (Knotts) didn't want to memorize the words. For Winship, of course, it's about being in charge, being in control; make the underling do whatever, whenever.

Apparently the dungeon was part of the house. And, they shot there twice as the negatives were damaged and they had to shoot the sequence again.

The Japanese cook; the gypsy caretaker; the hunchbacked, detongued groom; the butler who has killed 14 people; the nanny who might be a nazi--they don't deserve rhymes.

By the way, IMDb and everywhere else online (and the end credits) list the gypsy's (Stan Ross) name as Tibet, but his tombstone says TEBIT (it fills the screen at one point).

And, I only just noticed that Tart gives Hilda his card again as they leave; this time he puts it between her breasts.

Also, Elliott says he volunteered to be the one dressed as the shadow to grab Phyllis in the flowerbed. And earlier, Conway talked about how Knotts would ask Trisha Noble to rehearse her new nightgown speech extra times. But, hey, it was the tail end of the 70s and everyone was sexist, so that’s okay...

Or, as I’ve argued time and time again, every film offers a window into the time it was made, and specifically into how men and women interacted, or were allowed to interact. But, more on that tomorrow.