If Americans can be divorced for ‘incompatibility of temper’, I cannot conceive why they are not all divorced. I have known many happy marriages, but never a compatible one. The whole aim of marriage is to fight through and survive the instant when incompatibility becomes unquestionable. For a man and a woman, as such, are incompatible. – G. K. Chesterton

In his review of The Mirror Has Two Faces, Roger Ebert writes, “It's rare to find a film that deals intelligently with issues of sex and love, instead of just assuming that everyone on the screen and in the audience shares the same popular culture assumptions.” While he may be correct on the first point, I think he’s wrong on the second. I think The Mirror Has Two Faces operates on the very same assumptions that most any romantic comedy does: that we all want romance, that men and women are supposed to couple and copulate and consummate marriage. Plus, remember (as I’ve already referenced them a couple times) Dowd and Pallotta’s (2000) “cultural norms and rules governing romance that are reinforced in the romantic film genre...”

(1) marital fidelity;
(2) the importance of marriage for the right reasons, that is, for love;
(3) the primacy of individual wishes over family preferences in the matter of mate selection;
(4) the importance for the romance of sexual passion, on the one hand, and a sense of intimacy, mutual self-disclosure, and friendship, on the other; and
(5) the integration of the romantic couple as workers and consumers in the existing structure of modern capitalism... (p. 565)

As I pointed out the other day, #5 doesn’t play a big part in The Mirror Has Two Faces, but the other four—they very much do.

At her sister’s wedding, Rose expresses quite simply some of the things we assume women want; she tells Doris, “I'd love it if someone knew me, I mean really knew me. What I like, what I'm afraid of, what kind of toothpaste I use.” Then, she gets exactly that, and pushes for more. She and Gregory both move toward something they don’t really want, and they do this, basically, because what society tells them to want has turned out to be unavailable to them, or painful in its capriciousness.

Ebert calls The Mirror Has Two Faces, “On balance… a moving and challenging movie, fascinated by the murky depths that separate what people want from what they say they want and what they think they should want.” I’m not sure I’d call the film challenging, but it definitely plays in those “murky depths” he mentions. The film is all about the distances between what we think we want, what we think we should want, and what we actually want. These three things can be so very different that navigating our attractions can be challenging (even if the movie is not). 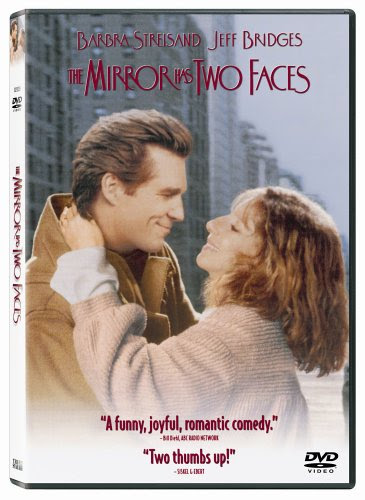 Don’t get me wrong; the movie is thoughtful. It explores notions about romance, and argues occasionally against them even as it reinforces them. It tries to be deconstructionalist, but I don’t think it quite achieves it. The ending, which is even more Hollywood than most Hollywood endings, defeats most of the intriguing (read: challenging, if you’re Roger Ebert) directions the film leans earlier on. Gregory’s idea of marriage without the physicality should be a reasonable thing, but the movie refuses to let him be right. Like When Harry Met Sally…, this film suggests arguments it simply doesn’t have the guts to make outside of its setup.

At best, The Mirror Has Two Faces takes a few of the common elements of the romantic comedy and reorders them chronologically. But, ultimately, it still hits all of the bases. Remarkably, the most romantic line in the film, in my opinion, comes along with the least romantic suggestion—Gregory’s marriage proposal. He tells Rose:

I think we have a lot in common. Although, I’m aware certain variables are and forever will remain unknown, as is the case with most complex equations where you have two completely diverse...

This feeling you have for Alex... It won't be the same with me. You won't have that constant ache in the pit of your stomach, because, well, we're not in love. I think we do share a genuine affection for each other. We share a passion for knowledge rather than a physical passion. Although, if sex is something that interests you, I'm sure I could provide that on occasion, given enough warning…

Well, we were in both in love and we were both miserable. And, we’re both alone. Which is a waste, really, because as people, we're quite valuable. Rose, when I look at you, I see a woman unlike any I've known before. Your mind, your humor, your passion for ideas. I'm very fond of you. I feel in a strange way, when I'm with you… I feel as if I’m... as if I'm home. So I think we should get married. People marry for sexual passion, which fades, or beauty, which fades. Why are my reasons more insane than those?

The line I think is the most romantic: the idea that when I’m with you, I feel as if I’m home. The level of comfort and intimacy implicit in those words amazes me.

In the end, it comes down to another line from Chesterton:

“Marriage is a duel to the death which no man of honour should refuse.”

Will marriage work out for everyone? No. Should it? Probably not. But, that doesn’t mean that it is not worth trying. Giving yourself to someone else, on any level, can be very rewarding. I can’t find an original source for this quotation, but there’s definitely some truth to it:

No relationship is ever a waste of your time. If it didn't bring you what you want, it taught you what you didn't want.