the sex part always gets in the way

I wanted to start this final entry for When Harry Met Sally.. by mentioning tarot cards. Long time readers of this blog will know that tarot cards came up a few times in relation to Groundhog Day, and returned in relation to both The Ring and The Sixth Sense (the latter without any cards being in the film at all). And, sure enough, When Harry Met Sally... includes both Harry throwing cards into a bowl— 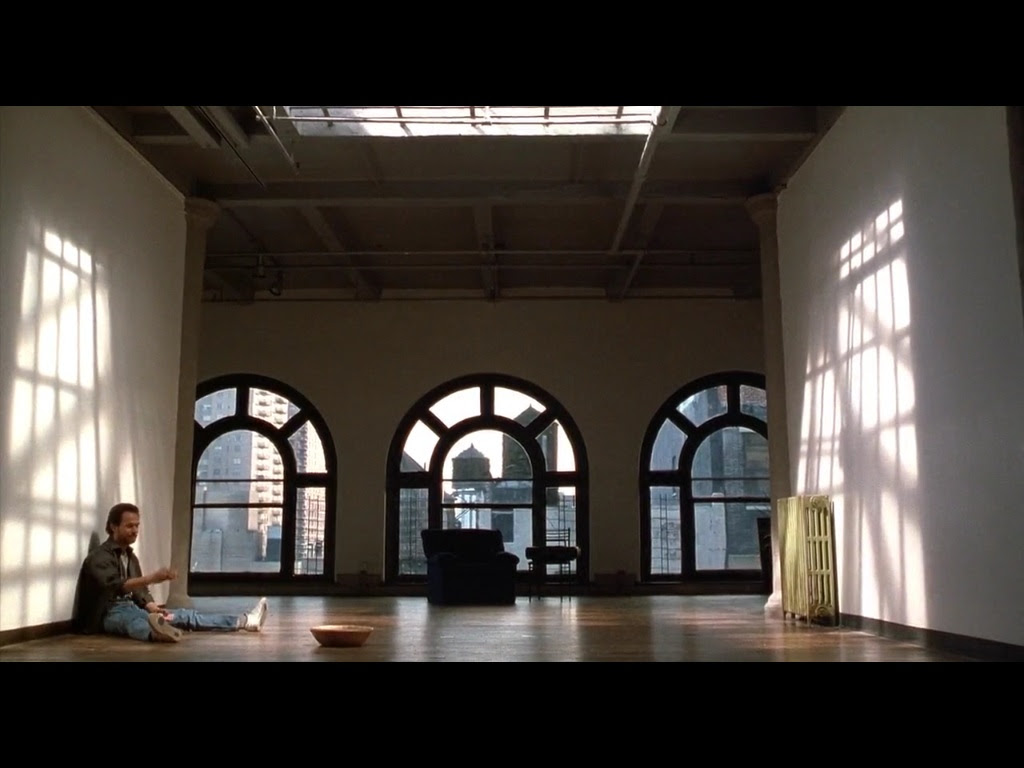 —and a specific reference to tarot cards—among the book titles where Marie and Sally are standing in the bookstore is The Mythic Tarot: But, it is late—the conference day has gone very long, and I have a few notes to get to before I move on to another romantic comedy.

Hinnant (2006) details “seven different scenarios or narrative possibilities” or “models” of courtship and romance as demonstrated in Jane Austen (p. 295). When Harry Met Sally... has a tiny bit of what he calls the “drama of prior commitment”—really, the film only employs that as an excuse as to why it doesn’t matter how put off Sally may or may not be by Harry in the two sequences prior to the main timeline of the film. A lot if modern romantic comedies employ what he calls “an atmosphere of bitter animosity [which] involves the initial antagonism of an improbable pair of lovers who will only slowly come to appreciate in one another the sterling moral characteristics so highly prizes in the courtship novel [or film]” (p. 297). In a way, perhaps, Harry—but not Sally—exists somewhere in that description, “only slowly coming to appreciate” what we all know damn well is going to happen at the end of the movie...

Which is interesting actually, because originally, Harry and Sally were not supposed to get romantically involved in the end.

Because the pair are unaware of the depth of their feelings for one another... a third party may have to be introduced into the narrative. Rene Girard’s account of mimetic desire in which the desire of a subject is incapable of recognizing itself unless it is modeled upon that of another subject for the same object is pertinent here. This triangular structure leads, according to Girard, to rivalry and violence. (p. 297, citing Girard, 1965)

Anyway, the formula for your basic romantic comedy is “that the lovers achieve an initial rapprochement only to separate but, by story’s end, to reunite as a romantic couple” (Dowd & Pallotta, 2000, p. 559). The romantic comedy, as I said yesterday, is built on a conservative worldview, much like the slasher film, that holds as implicitly (and sometimes explicitly) true several normative rules/values that are reinforced and reified by each film, even the ones the drift farthest away from the formula. In fact, it might be some of the more unusual romantic comedies that so strongly reinforce and reify the conservative values inherent within the genre by creating such stark contrast. Dowd and Pallotta (2000) list the “cultural norms and rules governing romance” within the romantic film (note: not only romantic comedy):

Regarding the first, Sally rebuffs Harry’s early come on because he is “going with” her friend. Harry tells Sally, at the airport, that they can now be friends because they are each involved with other people. But, he quickly corrects himself. “That doesn’t work either,” he says, “because... the person you’re involved with can’t understand why you need to be friends with the person you’re just friends with. Like it means something is missing from the relationship...” Maybe it isn’t marital fidelity, but Harry is suggesting that relational fidelity is challenged essentially by the very presence of a third party. “The person you’re involved with,” he continues, “then accuses you of being secretly attracted to the person you’re just friends with...” And, it is all but impossible to disprove something that is supposed to be secret anyway.

I’m not saying that Harry is correct about any of this, of course. But, recall Tan’s (2001) suggestion that When Harry Met Sally... “is among the best and most popular [romantic comedies] for one simple reason - it speaks the truth about men and women.”

Plus, prior to meeting Jess, Marie exists as an unlucky-in-love counter to Sally because she dates married men. Her love can never be properly consummated with marriage.

Regarding the second item on that list, When Harry Met Sally... takes place in a world where “the one” actually exists and everyone should be, and women are, looking for “the one” so that love and marriage can follow.

When Harry Met Sally... is almost entirely about and encapsulate in that dichotomy in #4 but #5 barely figures in at all... except for, say, Marie’s mentions of her married lovers buying things for their (his?) wives (wife). And the Sharper Image scene, or the wagon wheel table scene. These things are subtle but they do position the story in a world in which material purchases and possessions matter and thus, “the existing structure of capitalism” matters.