we lost our way

On the HOTEL sign outside Vivian’s building, only the H and O are lit up. This seems both too on-the-nose and over-the-top.

Kit’s and Vivian’s motto is “We say who, we say when, we say how much.” Later when Vivian is mad at Edward, she forgets that last part. She says, “I say who. I say when.” And then, she repeats, “I say who.” Despite the opening line of the film, that it is “all about money,” it’s no longer about money. She doesn’t even take the money, though she does demand it, when she leaves then. And, ultimately, after she has been paid and is back home, she gives some—not sure how much—of the money to Kit.

I’ve written about the major differences between $3,000 and Pretty Woman before, but not a lot of the details. For example, this was Lawton’s second produced screenplay. It reads, especially early on, like someone’s first time writing a screenplay; there’s bit too much exposition setting the scene.

Looking at the script again right now, I thought of Dyer’s (2010) script breakdown. Plot point one, going by page count, would be when Vivian goes shopping... specifically, on page 40, Vivian returns to the original boutique that kicked her out. Plot point two would fall between the aforementioned fight between Vivian and Edward and their San Francisco date.

Leave out the page count or runtime, and really plot point one, obviously, is when they negotiate the $3,000. That’s about to happen right now on my television. Plot point two... Vivian and Edward making up after the fight is a good spot, actually. But, it’s a little problematic structurally in the original in which Vivian and Edward do not end up together.

(The exchange—”I would have stayed for two thousand.” “I would have paid four.”—bugs me. If she has not been paid yet, she is far too trusting to suggest her price could be lower; it’s not like they’ve got a written contract. And, he also shouldn’t suggest his willingness to pay more or she might later hold out for more when it comes time to have sex again. This exchange suggest not only the realistic possibility that Vivian is not very shrewd in business, but also that Edward, who is clearly supposed to be particularly successful, is also not very shrewd in business. Of course, given his antagonizing his own attorney later and abruptly dropping a business plan—the Morse takeover—in place for months (with a thousand man hours on it) without telling anyone suggests he’s already a bit of bad boss.)

The reason it’s problematic is this: in a plot that doesn’t end with Vivian and Edward together, the plot point of them growing closer is misleading and manipulative... Well, this isn’t problematic for the potential viewer, necessarily, because... I was going to suggest that the point was that we expect them to get together but the capitalist reality within the film won’t allow it. Except, $3,000 is not a comedy, so really, we shouldn’t expect the leads to get together necessarily. Note: Dowd and Pallotta (2000) point out that romantic dramas must “contend with the reality that the love affair must almost certainly never succeed” (p. 558). It is in romantic comedies, specifically, that the love affair is more likely to succeed. So, of course the turn from $3,000 to Pretty Woman means Edward comes back to rescue Vivian from her tower just as she imagined as a child. It’s weird. If you take certain parts of the original script and certain parts of the movie—the opening magic trick, for example—you’d get a serious critique of modern capitalism and the resulting class structures wrapped up in a romantic package. Notably, in $3,000, Edward’s change of plans with the takeover is not saving the company in question rather than dismantling it, but rather taking extra advantage of what piece of that company—a waste processing plant—to make money off it separately by selling the toxic waste rights to the highest bidder.

Yet, it’s in the original script that we get a much better reason for the decision Edward makes regarding the takeover in the filmed version. Even though Edward doesn’t hear this speech Kross (in the film, Morse) makes to Vivian, the content would work on the audience to justify Edward helping Kross/Morse rather than hurting him. Kross tells Vivian:

Your boyfriend’s a real sharpie, little girl. A real shark. That’s the kind of man who makes it these days. They smell money like blood.

There was a time when men got rich by building things. I built ships the size of cities! Ships that could rule the seas into the next century. Why, last year the Navy recommissioned a ship out of mothballs that I built forty years ago. They did it because they knew damn well no one could build anything better! We built this country into the greatest industrial power the world has ever known. We creamed the Japanese! We dwarfed the rest of the world. Dwarfed! This country sent men to the moon! (Beat) But something happened...

We made mistakes, maybe. I don’t know. We lost our way.

Listen to too many Harvard fags telling us how to maximize profits. And now men like your boyfriend, they survive by feeding off our decay. They make themselves rich by sucking the money out of our shipyards. Blind to the future. They’re destroying everything we built.

But stay with him, little girl. You don’t want to be on the wrong side of the fence when this country falls apart. He’s going to be a good little meal ticket for you. (p. 64-65)

Morse’s son says a couple lines from that in the film, but they don’t play well coming from him. It’s interesting that Kross is more like the bad guy in this deal. When he tells Edward,

I’m not going to pay you off. I’m going to fight you with every resource I have. Neither you nor any of your cronies will ever set foot in my shipyards. You’ll burn in hell first.

Alright. If you feel that way, do what you have to do. And if you change your mind, I won’t hold it against you later. Just tell me that you’ve changed your mind and I’ll forget about this conversation.

Edward is cold, but not evil. He lacks emotion. This version of Edward is one that can use the film version of Vivian to warm him up. Interestingly, original script Edward has no reason to be this way. He just is. This is where I think the original makes for a nice critique. Edward is a businessman coming out of the 1980s, Vivian is a hooker. As he simplifies it in the film, they both screw people for money. Without origin stories, though... they are more symbolic of their separate fields, symbolic of the system that creates them. A system script Edward sums up quite well: 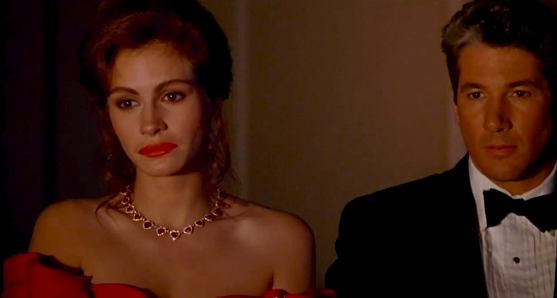 It occurs to me that, coming out of the 1980s, this film has good reason to sit on the brink between a good romantic comedy and a shallow, 80s, money-obsessed film. This is not a 90s film. It is an 80s film, built on American hegemony, cultural and financial superiority most of its audience wouldn’t dare to question.

Really, all you need to know about what is so very different in $3,000 that is not in Pretty Woman is this bit from Vivian:

I’m going crazy ‘cause you won’t let me get high. I’m bored out of my fucking mind all day and whenever I see you, you treat me like shit! You don’t like the way I eat. I never tie your tie right. I don’t drink enough and then I drink too much. You’re always shitting on me!

Note, for example, the tie thing. In the film, Vivian knows how to tie a tie because—insert joke—she screwed the debate team in high school. She ties Edward’s tie perfectly the first time. In $3,000, she ties it several times throughout, and he critiques the placement of the design on the knot, comparing Vivian to his ex and how she tied a tie. Edward’s response to this rant, by the way is to say, “I’m sorry. I thought I was treating you pretty nicely.” To which Vivian responds:

I’ve fucked stinking old men who made me want to puke, but I’ve never had anyone make me feel as dirty as you do! You make me feel dirty inside.

A) she isn’t “new” to prostitution. B) this is the same girl who not too many pages later seems to both be crazily in love with Edward and also just crazy. $3,000 is just a darker beast, all around, even though so many of its beats are the same as the thing it became.

But, it still remains a romantic story because, well, it’s all about money. Everything is a business decision. Dowd and Pallotta (2000) describe it well. “We think of love,” they write,

as a significant undertaking, an investment in our future well-being, that must be approached carefully and rationally. Few adults today take seriously the notion that we each have a perfect match, someone in the world who would complete us as a missing piece does a puzzle. We might describe our lover as our soulmate yet also understand that he or she is almost certainly not the only one who might be so described. (p. 554)

That’s really as good a place as any to end this month’s discussion of romantic comedies... or perhaps, with the less academic lyrics of Tim Minchin:

If I didn’t have you
Someone else would do

That isn’t to say, much like more of Minchin’s “If I Didn’t Have You,” I don’t value romance and love and all that. I just don’t think that one love lost is the end of the world. Of course, it can feel like it. I’ve felt that more than once. But, I’ve moved on. And, if I find love again and lose it again, I’ll probably hate these words right then, when I’m in pain and hating the world. But, that doesn’t make it any less right.

But, I’ll can do without romantic comedies for a while.

Horror films—those I can do some more.