but i can see what the true story is

There’s commentary playing. Moonstruck‘s commentary, unfortunately, is three people (Cher, writer John Patrick Shanley and director Norman Jewison) recorded separately. It’s not a nice back-and-forth, though already, just a minute or so in, it seems like Jewison at least is responding specifically to what’s said in Shanley’s track. 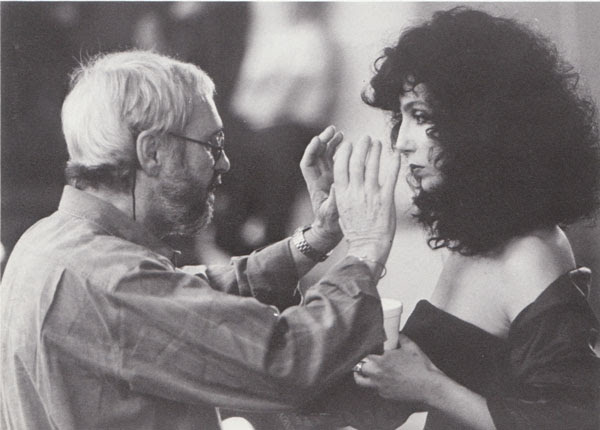 The Grand Ticino, a real restaurant, didn’t want to stop serving customers for filming. So the interior was a construct.

Cher was nervous about being Italian, holding the accent for the entire film.

Jewison guesses that Shanley writes quickly and doesn’t like rewrites. I get that. I write quickly and I hate rewriting things. Rewriting feels dishonest to me...

Early title: The Bride and the Wolf.

Shanley points out the practical nature of Loretta’s decision to marry a man she doesn’t love—Johnny. But, he says, life isn’t practical. It’s “a project” in which you end up dead. So, there’s no reason to live by common sense but rather something more visceral. Which is interesting because I was talking with my daughter tonight about just that sort of thing, the point to life, you know, when you’re just going to end up dead anyway. It’s dark but it’s true.

But, I was talking about rewriting. I think it’s a little bit dishonest to rewrite. What I wrote is what I wrote. I often get a sense that instead of rewriting I should include the original of whatever it was and then explain what I want to change and why...

Cher’s favorite scene is when Loretta tells her father she’s getting married because the champagne was real and she got drunk during filming.

...I guess it’s like I think the process is part of the product. Plus, unlike a lot of people—you can be jealous if you like—I can sit down and write an entire paper in one sitting relatively easily. And, it’s complete. Maybe I missed something in the writing, but missing it is now part of it, if that makes any sense.

Feodor Chaliapin, who plays the grandfather, kept liver in his pocket and the dogs got where they would follow him anywhere.

It’s weird. Separate from the commentary, I almost want to argue something strange; I think I hinted at it yesterday; Moonstruck is not a love story. Instead, the film is at once at about mindful practicality in long-term relationships (via the mother) and mindless abandon in short-term relationships.

Cher wanted Nicolas Cage, but another guy—not sure who—screentested and the studio wanted him (the other guy). Cher told them she wouldn’t do the film without “Nicky.” Which amuses me because Cage, in an interview in The Guardian, said that at the time, he didn’t want to do Moonstruck. He said:

I really didn’t want to make that... I wanted to make Vampire’s Kiss, because I was still trying to live my punk rock dreams. I did not want to be in a big splashy romantic comedy with Cher. (quoted in Spears, 2013, July 23).

Jewison thought Cage was one of the most tormented souls he’d ever met, at the time, much like his character.

Cher wanted one of Ronny’s fake hands as a souvenir. She doesn’t say if she got one.

Shanley tells a story about a guy he knew with a wooden hand who used to pick fights with people because he felt no one respected him. Talk of the fake hand reminds me of this bit from The X-Files episode, “Quagmire”:

...I’ve always wanted a peg leg. It’s a boyhood thing I never grew out of. I’m not being flippant, I’ve given this a lot of thought. I mean, if you have a peg leg or hooks for hands then maybe it’s enough to simply keep on living. You know, bravely facing life with your disability. But without these things you’re actually meant to make something of your life, achieve something earn a raise, wear a necktie. So if anything, I’m actually the antithesis of Ahab, because if I did have a peg leg, I’d quite possibly be more happy and more content not to be chasing after these creatures of the unknown.

Like Ronny with his excuses. He can never be happy or find love again (not to imply that he was happy when he was engaged) because of his hand. It’s an excuse, and as long as he can hold onto that excuse, he can be content, so to speak, in his unhappiness. He can embrace anger. Note, though, that Loretta never really reacts to the hand. She is never horrified by it, never taken aback at all. In fact, she immediately dismisses his interpretation of his own story when she meets him in the bakery. And, at his apartment, she redefines the story with her wolf interpretation—if you haven’t seen the movie, I’ll explain: Loretta suggests that Ronny cut his hand off on purpose to escape his engagement because he was with the wrong woman. She compares him to a wolf chewing off his own foot to escape a trap.

Cher hated doing the scene in the middle of the night, looking at the moon. Being in a bodysuit under that blanket (to imply nakedness, of course) was awkward because of the crewmembers “with big bellies” standing around. It was easier in the earlier scene, even in bed, because it was funny. This scene is supposed to be romantic but didn’t feel like it.

Jewison wanted the film to feel like an opera, everything a little over the top. He calls Loretta the soprano, Ronny the tenor, Johnny and baritone, Cosmo the bass, the aunt, uncle and grandfather the Greek chorus, and Rose the contralto. Each has its own area but in the end will be brought together to be on stage together for an “incredible crescendo.”

Jewison made Cher actually get dressed in the closet when Loretta does.

Jewison got someone to record all of Loretta’s lines so Cher could copy the accent but Cher says sitting own one day with the woman who recorded them to mark the script directly—she uses long As and short As as examples—helped far more than that recording.

Regarding Loretta calling the Chagall painting “gaudy”, Shanley makes an interesting comment about some people. He says, “They say a vaguely derogatory thing about something while they’re being positively affected by it. They’re almost rebuking themselves for getting sustenance from something.” It’s like when I enjoy a romantic comedy, I suppose. I’ll call it silly, point out is flaws and inconsistencies, but really, I’m getting something out of it. I would never admit that, of course. Not even just now.

Cher set her scarf on fire sitting too close to a space heater in a break between takes filming outside Ronny’s apartment after their night at the opera. It was so cold she was crying and it was the middle of the night. The snow was real because they were filming in December. There’s no Nicolas Cage in the commentary but I like the idea that he was also freezing when he gives his big speech:

Loretta, I love you. Not like they told you love is, and I didn’t know this either, but love don’t make things nice - it ruins everything. It breaks your heart. It makes things a mess. We aren’t here to make things perfect. The snowflakes are perfect. The stars are perfect. Not us. Not us! We are here to ruin ourselves and to break our hearts and love the wrong people and die. The storybooks are bullshit. Now I want you to come upstairs with me and get in my bed!

That speech sums up so much about Ronny as a character, about Moonstruck as a film, about love, about life, that I enjoy the idea that it took serious effort to get it out. Cher says she could barely move her mouth because it was so cold. And she has a lot less to say during that scene.

Jewison compares the final breakfast scene to a stage play. They even rehearsed it like a play, all the actors on location until they got the rhythms right. And, one of the many problems in getting the scene to work was that Cage, according to Jewison, wasn’t comfortable with the theatricality of it. At one point, Cher suggested they break for food and Jewison said they would eat after they got it right. This got him a SAG fine. And, at some point, Cage got into a fight, apparently with Jewison and another... the assistant director maybe—whoever Julie is—and he (Cage) threw a chair across the room.