who does it really work out for?

“You know what they say—it’s all about money.” That’s the opening line of Pretty Woman. And, arguably, the whole point to the existence of this movie—and I don’t mean from the perspective of the writer, the director, the stars, any of the filmmakers, really—is to make money. That’s why we get the unrealistic ending, because that will draw the biggest audience.

Yeah, that’s me being cynical again. But, so what? I’m about to be nice to this movie for a change. See, I don’t think the movie itself is telling us that “it’s all about money.” Even though Dyer (2010) suggests “In the first few pages of your screenplay, one of the characters should state the story’s theme out loud.” I think the movie ultimately rejects the idea that it’s all about money. Money loses out to love, even though money is the means to that end. Vivian wouldn’t be there if not for Edward’s $3,000. She wouldn’t have the whole Cinderella thing going on if not for more of his money. She is romanced as much by the clothing and the nice treatment that changing her appearance gets her than by Edward himself.

Trying to figure out the theme per Dyer’s standard. Maybe it’s Kit saying “We say who. We say when. We say how much.” She and Vivian are certainly trying to be more independent than other hookers. In the end, Vivian gets out of the business even before Edward comes back for her, and Edward also steps out of his usual line of business to go for something other than a girl who just wants to spend his money (although, I admit, that last point is problematic in a film that makes a big production out of Vivian spending Edward’s money).

Maybe it’s Vivian’s “I can do anything I want to, baby. I ain’t lost.” If we assume it’s Edward who’s lost and not Vivian. Except, I think the movie insists we believe they were both a little lost at the start of the film.

Or Vivian’s “This is fate. That’s what this is.” That’s what we want in a romance. We see the main characters at the front end of the film and we pair them off even before the film really does. We want them together. We need them together, or the film... the whole romantic comedy genre doesn’t make sense. But, really, the point within the movie comes from the character billed as “Happy Man.” The first time we see him, he says, “Welcome to Hollywood. Everybody comes to Hollywood’s got a dream. What’s your dream?” At the end of the movie, we hear him again: “Welcome to Hollywood. What’s your dream? Everybody comes here. This is Hollywood, land of dreams. Some dreams come true, some don’t, but keep on dreamin’. This is Hollywood. Always time to dream, so keep on dreamin’.”

The movie—all romantic comedies, really—operates on our dreams. We dream of financial success, the ability to buy what we want when we want it, to lavish those we care about with fancy things... or at least the things they want, even if those things aren’t fancy. And, we dream of romance, of love. Even if our dreams don’t go that far, we dream of at least something like companionship, finding someone we can talk to about whatever is bothering us, someone we can talk to about the dreams we’ve still got.

And, the movie works despite its flaws because dreams are, well, unrealistic. That’s why the movie ends when it does. We don’t want to see what happens later, when Edward and Vivian realize they don’t have much in common. They realize that spending 6 days together really doesn’t guarantee that any more days will be successful.

But, we specifically don’t see that. So, why make it depressing now by talking about it? Actually, well, the movie tells us why. Kit and Vivian have a poolside conversation about who they know, or don’t know as it turns out, that has ended up happy and in love. Kit wracks her brain trying to come up with someone, and all she can come up with is “Cinder-fucking-rella.” Problem there is that same thing I was just talking about regarding Pretty Woman. Cinderella ends just as the prince and the girl get together. We don’t see the relationship part of things. We see a girl whose circumstance is awful enough that we don’t really care how it’s going to go later. Cinderella, Hinnant (2006) tells us, is “a pervasive figure in sentimental courtship fiction” (p. 295). Hinnant cites the Cinderella story as the first of seven scenarios in Jane Austen’s novels, but the same scenarios are present in all romantic fiction, prose or filmed, dramatic or comedic. The second one of Hinnant’s scenarios is the the rescue plot, which also seems to fit Pretty Woman.

Importantly, both Vivian and Edward have specific roles they have taken on. Vivian, left by the guy she followed to Hollywood, has chosen the street rather than slink on home. Edward, given more motivation in the film than the original script, has become who he is in a sort of delayed revenge against his father, who left his mother when he was young. In one of the more personal moments he has in the film, Edward tells Vivian that the third company he took over was one for which his own father was president. His father has also only recently died, which plays almost like a minor point in a subplot rather than a vital piece of the larger story, but it is vital to understanding Edward’s transformation within the film. With his father gone, and now facing the prospect of putting a sort of father figure in the guise of James Morse out of business, it becomes understandable that Edward is changing here not because of Vivian but despite her. The fuel to his business methods—his anger with his father—has dissipated with his father’s death. It’s a somewhat disturbing angle, but the age difference between Edward and Vivian may also come into play here, because Edward is old enough to be father to Vivian and may in fact, by providing for and then rescuing her, Edward may be shifting into a more fatherly role, replacing his father just as he once took ownership of his father’s company. Recall, of course, that the film version of Edward does not seek out Vivian but happens upon her, and initially only pays her $20 to help get him back to Beverly Hills. And, even after he has paid her $100 to come up to his room, he balks at her impulse to have sex. I’ve previously compared the film to Lolita, actually, and that interpretation makes sense here. The rescue is something patriarchal and paternalistic, even if not strictly paternal. 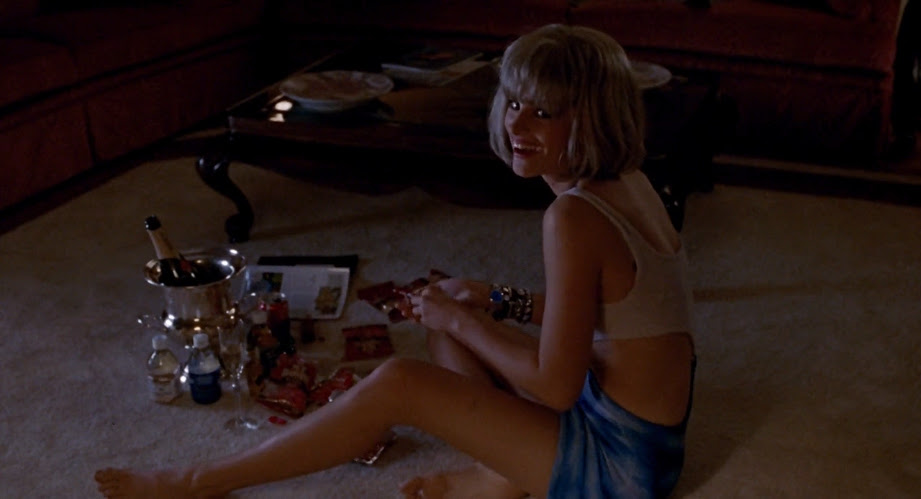 The film counters this with Vivian’s sense of personal agency. She doesn’t kiss on the mouth because it’s too personal. (This is not an element of the original script, by the way.) She disconnects from the sex in order to do what she does. It would be a stretch, though, to take Vivian Ward as a feminist character. Gilmour (1998) explains (in regards, generally, to women in romantic comedies, not specifically Vivian):

Although it is widely assumed that women in romantic comedies are images of feminine liberation, I argue that women’s roles in these films are contradictory. In the films and in the marketing materials around them, women at times enact masculine-coded tropes of agency and aggression and at other times enact feminine-coded passivity and morality. This contradictory status of femininity can be seen as a continuation of a much longer debate about the proper status of women in culture and in representation. (p. 35)

What I wonder is not about the women in these films, but the women watching them. The men as well. I mean, I’ve already suggested that we all dream of companionship and love and romance, but do we really define ourselves by this? Hell, I’ve even argued in this very blog that we don’t need love... I wish I could remember when that was so I could link to it, but trust me, I said it. I have also said the exact opposite. That’s what I do. Not because I’m a hypocrite, though, but because that’s how I think in reality (not to suggest that I am not sitting in reality, right now, typing this); sometimes I figure the thing missing from my life these days is the romantic relationship, that I want to find a girlfriend again, maybe even another wife. Other times, I figure I’ve got plenty going on right now as things are. I’ve got my kids, I’ve got my school, I’ve got my job. I don’t need more... Of course, if you’re attentive, you might have noticed my choice (subconscious, I suspect) of verbs there. I used want in that first bit, and need in the second. It’s the line between those two verbs, and the moments when one seems so very much like the other, that it’s hard to be sure what I want/need and what I don’t want/need. I figure I want it all. But, what I need is to do what I can to make sure my kids can do what they want. At least as much as it possible and reasonable. Sometimes I may neglect them for work—a weekend or longer away from home for a speech tournament, for example—but even that I do for them; I do it so I can be good at my job, and keep my job, and get a better job after I get my Masters next year, so that what we have can remain or improve.

What I may have once dreamed about what my life would be—that is something left behind for new dreams. My kids, my work... these are big parts of the ongoing dream.