i needed a little pick-me-up

I want to like this movie. I mean, I’m not a fan of modern capitalism, and, as I said yesterday it’s almost a critique of a system that creates sharks like Edward and whores like Vivian. (And, that’s too nice to Edward. In $3,000, Kross asks Edward, “You want me to recommend to the Board that my company be raped by a man like you?” (p. 63).

It’s almost a critique. But, instead of jumping into the plotline, it skirts along the top of it into a fairy tale.

Vivian is no longer a seasoned prostitute with a crack problem barely looking after the more vulnerable Kit. Instead, she’s new to the oldest profession, and judging by a brief shot of some photos in her apartment at the beginning of the film, she’s doing this because of a guy; I’m guessing her broke up with her since she’s either ripped or scratched his face out of the photos we see. It’s a cheap way of making her a little less dirty. The more expensive way, so to speak, was to cut the opening scene from Lawton’s original in which Vivian not only scores some crack but picks up the paraphernalia to smoke it just in case you didn’t already catch on what she was buying.

Edward is no longer a shark who, well, doesn’t care about the people whose lives he’s destroying. For example, explaining to Vivian what pension funds are, he says:

That’s cash invested in various accounts. It’s supposed to be used to pay worker’s retirement and health benefits. Sometimes it’s hard to get at because of various government laws, but with good lawyers you can usually strip them down since only part of them have been contractually promised to the employees. Anyhow, we figure Kross is worth about 400 million. We hope we can acquire it for between two and three hundred million. No matter what, I’m going to make a profit. The question is how large. (p. 49)

Now, he is somewhat charming from the start and finds it in his heart to help out Morse (the replacement for Kross) rather than take it over, because... reasons. He’s shown the classless whore the opera so of course he’s been transformed himself. The thing is, Edward’s actions up until the business meeting at the end of the movie are almost exactly his actions from the original script. There is no reason for him to fall for Vivian. And, in the film, there’s barely a reason for Vivian to fall for him, because she’s a bit too strong, a bit too smart (and I don’t necessarily mean she’s got intelligence)... She’s sharp. In the original, she’s a little more emotionally volatile. There’s a thing border, I guess between a petulant child and a crack-addled prostitute, and $3,000‘ Vivian falls a little more on the latter side while Pretty Woman‘s Vivian falls a little more on the former. The scene on right now, for example—she’s watching I Love Lucy while Edward works. It plays more like a scene from Lolita than a real romantic comedy. 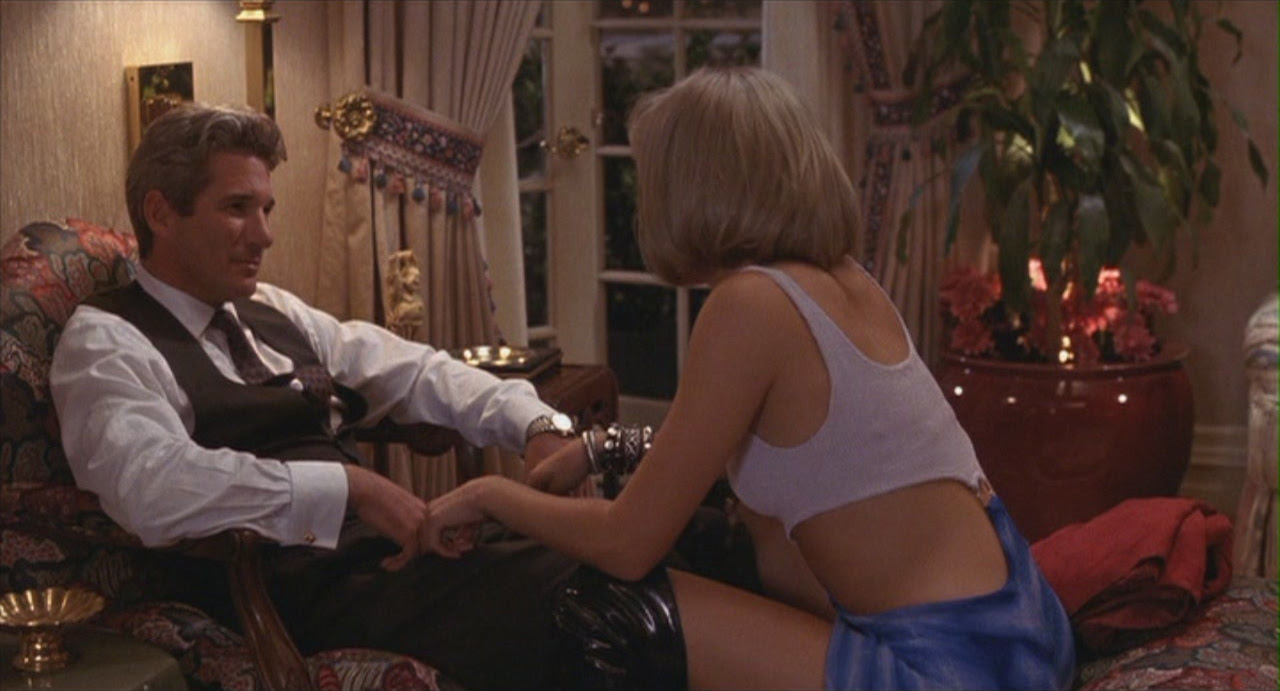 Roger Ebert, in his review calls Pretty Woman “the sweetest and most openhearted love fable” since The Princess Bride. I really don’t see it. I think he couldn’t be more wrong. Except, America bought into that, too. Number one with $11 million it’s opening weekend. And $178 million total domestic. With a budget of $14 million.

(It took #1 from The Hunt for Red October, which had made $17, $14 and $11 million the previous three weeks. I think I saw that one its opening weekend. #3 was Joe Versus the Volcano in its third week—I probably saw that later because I saw that one at a second run theater—the Academy in Pasadena. Saw The Lord of the Flies (#6 that weekend) at the Academy also.)

We bought into the fairy tale, the fable, whatever you want to call it. It wasn’t anywhere near as wholesome as The Princess Bride a few years earlier (though it was far more wholesome than $3,000. Ebert acknowledges, “There could indeed be... an entirely different movie made from the same material—a more realistic film, in which the cold economic realities of the lives of both characters would make it unlikely they could stay together.” I imagine something with a tone more like Leaving Las Vegas. Ebert ends his review: “And, for that matter, a final scene involving a limousine, a fire escape and some flowers is awkward and feels tacked on. But by the end of the movie I was happy to have it close as it does.” We all were. Because we’re shallow when it comes to cinematic romance. Give us a guy and a girl and we yearn for them to get together even before they do. We grow up on happily ever after and we demand it constantly, no matter how unrealistic it may be.

(Hell, even $3,000 ends on an almost happy note as, with $3,000 to her name, Vivian takes Kit to Disneyland. Maybe that’s why Disney bought the film—it ends at the happiest place on earth. Then, Disney realized what it bought, and mangled it just enough that it played like an even shallower version of Cinderella for the modern age.)

And, in America especially, we dream of the kind of simplistic makeover this movie presents—a little cash to throw around and in a single day, low class becomes high class. The rich don’t like nouveau riche. But, we do, because we want to be it. The romance of the “love story” goes hand-in-hand with the romance of the money. That Dowd and Pallotta (2000) “cultural norm” the other movies I’ve watched this month barely touch on—“the integration of the romantic couple as workers and consumers in the existing structure of modern capitalism” (p. 565)—is central here. The two leads are involved in business in such a way that they must detach themselves from it to perform. Edward ignores the employees he may ruin, Vivian has sex like a robot. That’s modern capitalism for ya.

Explaining how she followed a guy (a “bum”) out to Hollywood, Vivian tells Edward, “So, here I was: no money, no friends, no bum.”

“And you chose this as your profession?”

I worked at a couple fast food places, parked cars at wrestling, and I couldn’t make the rent. I was too ashamed to go home. That’s when I met Kit. She was a hooker and made it sound so great. So one day I did it. I cried the whole time. But then I got some regulars and, you know... It’s not like anybody plans this; it’s not your childhood dream.

That’s modern romance for ya. Broken hearts, broken dreams, sell yourself to the right guy and everything will work out fine.