i don't need any romantic hassles this week

Cinderella‘s kind of a horrible story, too. The idea that love can be found in one dance, that the prince can rescue the girl from a bad situation... except, love can feel like a rescue, I suppose. And, it’s loss can feel like... whatever the opposite is.

I saw The Disappearance of Eleanor Rigby: Them today and it’s a sad story that invokes the shadow left when love (and romance) are gone. It’s an awesome film, a tragic film with the vaguest sense of hope in the end. Comparatively, Pretty Woman is a slight little thing, hardly worth another thousand negative words...

Instead, I offer this. There’s a simple reason that we buy into the “romance” on display in Pretty Woman. Money and the things it can buy are important to us in this country, in the whole of the Western World, to be sure. Where other romantic comedies focus in on the other items on Dowd and Pallotta’s (2000) “norms,” Pretty Woman recognizes that all love is a transaction. Recall my discussion of social penetration theory a few weeks back. All social interaction can be described in economic terms. Value-laden, maybe, but still economic. All with a cost-benefit analysis. I don’t mean that cynically, either. It’s metaphor, sure, but not cynicism. This time.

My point is, wanting something and making the effort to get it—that’s the American way. Whether it’s a failing company, a prostitute, a lover... it’s all the same. It’s a goal and it takes whatever steps it takes to get there. Edward has the benefit of money. Movie Edward has made most of it himself rather than inheriting a lot of it like original script Edward, but both versions have money and that certainly makes the process easier. He can make people do what he wants them to do. He can pay Vivian to be however he wants her to be.

Really... Really, I want to say something more positive. In theory, the romantic comedy is a wonderful thing, In execution, often romantic comedy consists of shallow excuses to pretend true love is easy and waiting around every corner.

Tomorrow, I will look past the romance and see what else this film has to offer.

Let’s hope there’s something good there. 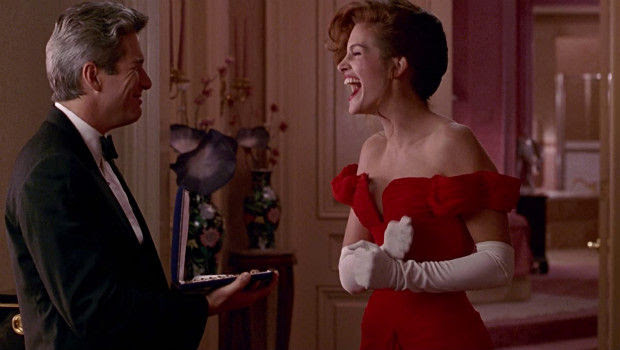