we both screw people for money

Now, let’s get out of New York. And, be a little less light and happy. The kind of movie that starts with two prostitutes buying some crack on the streets of Hollywood... unless Disney gets their hands on the script and twists it around and around until not only does the lead female—still a prostitute, mind you—no longer has a drug problem and the rich guy picking her up is just asking for directions, not prowling for a replacement girlfriend for the week. What used to be a rather despicable guy picking up a hooker who lists her likes as “hot baths and white rocks,” becomes a meet-cute instead. It’s a little sad. 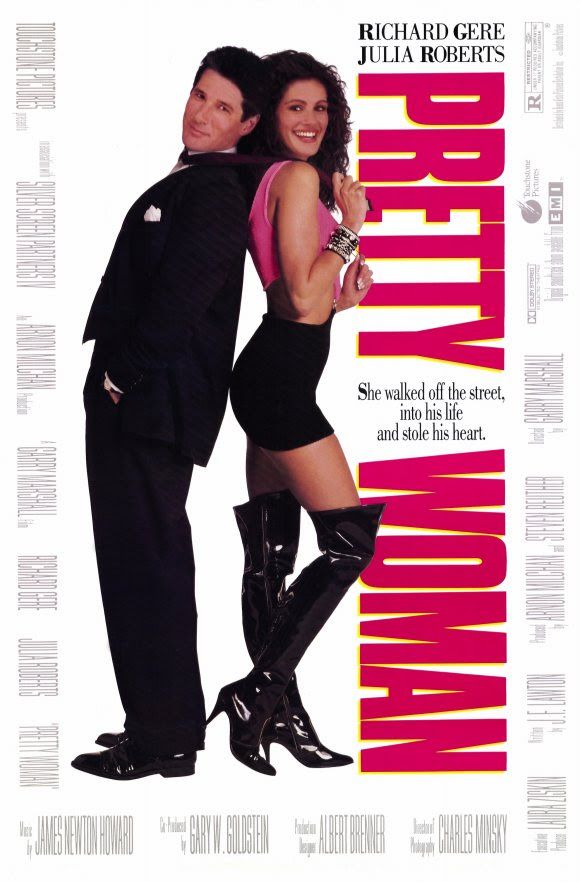 The original script by Jonathan Lawton was called $3,000.

$3,000 has a fairly straightforward plot, making a serious effort toward a critique of 1980s American capitalism. Pretty Woman drains so much of the darker... I would say realism, but $3,000 is just slight enough that it’s hard to suggest it has real depth. But, whatever darker realism there is in the original is sucked right out of this version.

For example, consider this exchange, the morning after their first together, from the original script:

VIVIAN
I forgot where I was.

EDWARD
That must be an occupational hazard.

Think of the reality of the information there. The suggestion is that Vivian falls asleep wherever she has been paid to be—it’s a depressing thought, I think. But, the film’s version plays slightly differently. The only dialogic change is Edward’s line becomes a question, “Occupational hazard?” And, Vivian laughs. And, we laugh.

Sidenote: negotiating buying a person for a week should not be an amusing back-and-forth, either.

It’s remarkable, actually, how much of the dialogue in the film comes straight from the original script, but play them with a smile and a laugh, add some upbeat music here and there, and the whole sordid affair becomes a classic in the genre of romantic comedy.

Humanize your ruthless businessman with a little piano playing and a dead father, and the idea that he wouldn’t fall in love with the prostitute he’s hired becomes silly. Of course, you’ve got to take away her crack habit, too. To be fair, she doesn’t actually use any crack in the original script; Edward pays her “hardship pay” to not use any drugs while she’s with him.

Sidenote: The “Pretty Woman” shopping sequence bugs me. It seems so entirely not out of place in a movie like this. But, then, combine it with our first shot of Vivian, a body in bed with no face, and the movie is begging us to objectify her as much as her clients do.

Edward’s making Vivian feel cheap in the movie plays like a manipulation. The same girl who showed off her bare thigh in front of the elevator the first night they were together just to get a rise out of another couple feels cheap because he told his lawyer she’s an prostitute? I don’t think so. Now, in the original, Edward offers her to William Reaves (the character that morphed into Philip Stuckey (Jason Alexander)); “You want her?” he asks. “I don’t mind. You want to try her?” William’s response: “Jesus, Edward, don’t be so tacky. I can rent my own girls.” Note: William runs a call girl service. Edward has already told William that “this girl I have for the week” is “a real tramp” and also that she’s “ real tiger in bed.” When William says he isn’t interested, Edward offers, “Go ahead, Vivian doesn’t care. She’s used to six guys a night. Just be sure you wear a condom. She’s careful about that.” He claims later to her that he was joking because of William’s service, but his apology comes across more like the same manipulation he previously used on Mr. Kross (Mr. Morse in the movie) than as anything genuine. Hell, before he offers the excuse that he was joking with William, he says, “I’m sorry. It never occurred to me that you would mind, honestly.”

An interesting and notable change from $3,000 to Pretty Woman is the opera. In $3,000, Edward takes Vivian to see Aida, which involves a princess held as a Egyptian slave who falls in love with an Egyptian commander. In Pretty Woman, Edward takes Vivian to see La Traviata, which involves a courtesan in love with a nobleman. From slave to courtesan—that’s the change in translation. It’s still supposed to be love, but Vivian has more agency to her in the film. But, really, in either incarnation, Vivian is not a particularly free agent. Both Vivians work without a pimp, because that allows her more agency, but—and here one of Dowd and Pallotta’s (2000) “cultural norms and rules governing romance” is “reinforced in [this] romantic film...” (p. 565)—she has no agency as long as she’s operating in a world in which she could be property, could be bought for the week, the night, the hour. Pretty Woman is not a wholesome romantic comedy about love winning over all; it’s a scathing indictment of a capitalist system that creates both Vivian and Edward... or at least, it should be. It fails to be, because the audience wants a nice happy ending.

I don’t usually get too “political” in this blog, but I just gotta quote Vivian’s rant about pimps from $3,000:

Yeah, they take their cut. Then they sell you their shitty overpriced dope. Then they rent you their places... they let you use one of their cars. Then they tell you they need a bigger cut, and the dope costs more, too. But don’t worry, they’ll lend you the money ‘til your next job. Yeah, they’ll help you. They’ll help fuck you. Well, no thanks. I only want to get fucked by one person at a time. (p. 108)

In a modern America where we’ve got paycheck advance stores all over the place and where our economy so recently fell apart arguably over subprime loans, and “big pharm” makes billions, I figure we’ve got plenty of pimps out there right now. It’s nice to imagine a businessman who buys companies just to tear them apart can find his humanity in a woman who sells her body for money. But, realistically, they’d probably just fuck one another and then go their separate ways.

Disney just had to ruin it.